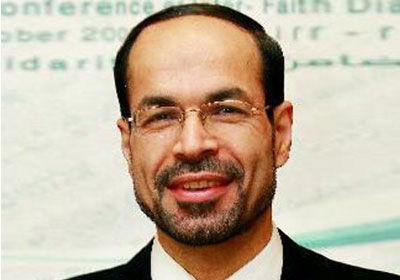 Nihad Awad is among the founders of the Council on American-Islamic Relations (CAIR) and serves as its executive director. In that role, he has attained a degree of political clout, invited to stand beside President George W. Bush at the Islamic Center of Washington days after the 9/11 attacks.[1] Before that, Vice President Al Gore appointed Awad to a civil rights advisory panel for the White House Commission on Aviation Safety and Security.[2]

These are influential recognitions for a man with past ties to Hamas, designated a foreign terrorist organization by the United States in 1995. In fact, Awad publicly declared "I am in support of the Hamas movement," during a March 1994 symposium at Barry University.[3]

That statement came six months after Awad attended a secret three-day summit in Philadelphia attended by people the FBI considered Hamas members or supporters.[4] During a 2003 deposition, Awad would not deny attending the meeting, saying he didn't remember whether he did.[5]

It wasn't his only public endorsement of Hamas, which is governed by a charter rejecting "so-called peaceful solutions" and calls for the killing of Jews. During an appearance on CBS' 60 Minutes in November 1994, Mike Wallace asked Awad what he thought "of the military undertakings of Hamas," Awad responded, "the United Nations Charter grants people who are under occupation [the right] to defend themselves against illegal occupation."[6]

U.S. policy in the Middle East is faulty because of Jewish influence on the White House, he told Georgetown University students in a 1998 speech organized by the Muslim Students Association. Of President Bill Clinton's advisors, he asked, "Now, of Clinton's advisors, who is now, who of his advisors, who... who is opposing the latest agreement with Iraq? Look at their last names. Look at their ethnic, their ethnic or religious or racial background. You will see that these are the same groups that belong to the same interest groups in the Administration." He later added that "many Presidents are servants to Israel, and it's hard to see someone who is, uh, disobeying the political authority of Jewish interests."[7]

That's not to say Awad was supportive of America's peace initiatives.

In the July 2001 Washington Report on Middle East Affairs, Awad said, "Our preference is peaceful negotiation...but if the peace process is flawed, then resistance is necessary."[8]

At a Right of Return rally in front of the White House on September 16, 2000, Awad rejected coexistence between Israelis and Palestinians, stating, "they [Jews] have been saying 'next year to Jerusalem,' we say 'next year to all Palestine.'"[9]

Before helping launch CAIR, Awad worked as public relations director for the Islamic Association for Palestine (IAP) in 1993 and 1994.[10] IAP United States. A 2001 Immigration and Naturalization Service memo documented IAP's support for Hamas and found that the "facts strongly suggest" that IAP was "part of Hamas' propaganda apparatus."[11]

IAP also came up in a memorandum opinion in the case of Holy Land Foundation v. Ashcroft, in which the Holy Land Foundation unsuccessfully sued then-Attorney General John Ashcroft to challenge its designation as a Specially Designated Terrorist Entity. U.S. District Judge Gladys Kessler found that "Islamic Association for Palestine ("IAP") has acted in support of Hamas."[12]

Included in that support was the IAP's publication and distribution of Hamas documents, including its virulently anti-Semitic charter.[13]

In November 2004, a federal magistrate judge held IAP civilly liable for $156 million in the 1996 shooting of an American citizen by a Hamas member in the West Bank.[14] The judge found that IAP had "published and distributed an abundance of pro-Hamas documents."[15] The U.S. Appeals Court in the Seventh Circuit overturned the award in December 2007 after determining the Boims had not done enough to establish that the groups' support for Hamas contributed, even indirectly, to their son's murder. The case was sent the case back to the district court to allow for additional proceedings. [16]

Evidence released in the HLF trial reveals that IAP was a member of the Muslim Brotherhood's "Palestine Committee" in the United States.[17] According to an internal Brotherhood report, the Brotherhood created the IAP to "serve the cause of Palestine on the political and the media fronts."[18] An internal memo calls on the Palestine Committee members, to work to "increase the financial and the moral support for Hamas" to "fight surrendering solutions," and to publicize and focus on "the savagery of the Jews."[19]

Awad is the 32nd person included on the Palestine Committee's internal telephone list.

Given the opportunity to distance himself from IAP in September 2003 Senate testimony, CAIR Executive Director Awad instead chose to defend the group: "The Islamic Association of Palestine (IAP) is a grassroots organization which continues to function legally and has only been 'linked' through allusion and no charge of criminality has been brought against the organization."[20]

When the Texas-based computer export company Infocom was raided in September 2001, Awad called it "an assault and an insult to Muslims in America...We don't see that there is a good probable cause for this except stereotypes."[21] Infocom subsequently was indicted and convicted of illegal transactions with Libya, Syria, and Hamas political leader Mousa Abu Marzook.[22] Five company officials, all brothers named Elashi, were convicted on related charges.[23]

When Marzook was detained by U.S. officials on an Israeli murder warrant in 1995, Awad called the arrest "politically motivated ... [and] orchestrated to serve as a wedge between America and Islamic countries."[24]

And he has repeatedly defended the Texas-based Holy Land Foundation for Relief and Development, which was accused of illegally funneling millions of dollars to Hamas. During a May 2003 forum at the Johns Hopkins School of Advanced International Studies, an audience member commented that "the Department of Justice had released reams of evidence showing that these organizations, including the Holy Land Foundation and Benevolence International [another charity whose assets were frozen], have direct connections and in fact their leadership was the leadership of Al Qaeda and Hamas," Awad replied:

"I am sure if we...put under the microscope, every major civic or political organization in this country, including the Red Cross, you will see that some dollars went here and there in some country, but we don't shut down the entire operation of the Red Cross..."[25]

On November 24, 2008, jurors in Dallas convicted the HLF defendants on 108 counts tied to its Hamas support. In handing down lengthy sentences to each defendant, U.S. District Judge Jorge Solis said it was clear "[t]he purpose of creating the Holy Land Foundation was as a fundraising arm for Hamas.[26]

In a February 2003 IslamOnline.net live dialogue, Awad labeled law enforcement actions as the product of "extremists, including the Christian Right and the pro-Israel lobby" to target Islam and Muslims. "The result of this is clearly apparent from the racist policies and practices being carried out by some branches of the U.S. government influenced by these groups, in contradiction to the assurances President Bush gave us on more than one occasion: that this war is not against Islam."[27]

Responding to a Department of Justice initiative to fingerprint and photograph nearly 100,000 foreign nationals who were already in the country in an effort to weed out suspected terrorists, Awad said, in June 2002, "What is next? Forcing American Muslims to wear a star and crescent as a means of identification for law enforcement authorities?"[28]

[11] In the matter of Hasan Faisal Yousef Sabri, Notice of Revocation of petition for Amerasian, Widow, or Special Immigrant (Form I-360), Attachment.

[20] Supplemental Testimony of Nihad Awad Before the Senate Subcommittee on Terrorism, Technology and Homeland Security, Terrorism: Two Years After 9/11, Connecting the Dots, at 5, September 17, 2003.

[25] "Bridging the Gap between America and the Muslim World: The Role of Muslim and Arab American Organizations," Nihad Awad at Johns Hopkins School of Advanced International Studies, May 13, 2003.