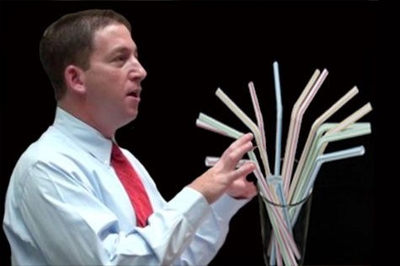 In a story he touted for weeks as "the most important in the archive" of NSA documents given to him by NSA leaker Edward Snowden, Glenn Greenwald reported Wednesday that five Muslim American political activists have been subject to surveillance by the FBI or NSA.

The story casts the five as victims of unjust persecution solely because they are Muslims (with one exception), or because of their political activity.

"The five Americans whose email accounts were monitored by the NSA and FBI have all led highly public, outwardly exemplary lives," Greenwald and co-author Murtaza Hussain write.

That's not true in several cases, as we will show. But the story falls well short of Greenwald's hype, in part because it offers no evidence that the surveillance continued after 2008. And all the surveillance described resulted from court-approved warrants and not some unchecked rogue operation. What Greenwald and Hussain do not mention is telling, too.

If the problem were as rampant as they portray it, plenty of other prominent Muslim activists should have been identifiable. But no one from the Islamic Society of North America, which was founded by Muslim Brotherhood members in America, is mentioned. The same is true for the Muslim American Society – which was linked to the Brotherhood in court testimony by Abdurrahman Alamoudi, once the most prominent Muslim political activist in America – along with the Islamic Circle of North America, the Muslim Public Affairs Council and other organizations which share the same faith and engage in the exact kind of political activity as those spotlighted.

In addition, Greenwald and Hussain acknowledge there are many unknowns.

For example, "it is impossible to know why their emails were monitored," they write, but at the same time, the story's entire premise is that there could be no cause beyond some form of discriminatory focus to target people engaged in activity protected by the First Amendment.

Sources acknowledged "that political speech is sometimes viewed as a sufficient reason to launch an investigation," the story says. The example provided?

"If you are a political activist calling for violent jihad—yes, that could trigger an investigation," a former FBI lawyer told them.

One would hope so.

Indeed, many of the email accounts on an index Snowden provided, and which provide the foundation for the story, "belong to foreigners whom the government believes are linked to Al Qaeda, Hamas, and Hezbollah." Other Americans identified on the list include al-Qaida cleric Anwar al-Awlaki and Samir Khan. Awlaki directly encouraged acts of terror against the United States, including communicating with Fort Hood shooter Nidal Hassan. Khan ran a glossy al-Qaida magazine, Inspire, which provided specific suggestions and instructions on how Muslims could carry out homegrown attacks.

Both were killed in a U.S. drone strike in September 2011.

In a joint statement issued Wednesday, the Director of National Intelligence and the Justice Department called it "entirely false" to say U.S intelligence is targeting anyone  "solely because they disagree with public policies or criticize the government, or for exercising constitutional rights ... On the other hand, a person who the court finds is an agent of a foreign power under this rigorous standard is not exempted just because of his or her occupation."

As for the five people identified as targets of FBI or NSA surveillance, the Greenwald/Hussain story overlooks significant documented history showing Council on American-Islamic Relations (CAIR) Executive Director Nihad Awad's connection to a Hamas-support network and his solicitation of millions of dollars from foreign countries.

The story notes that "Awad's surveillance appears to have coincided with the timing of the Holy Land Foundation case." That case involved the illegal funneling of millions of dollars to Hamas through a network of charities controlled by the terrorist group. Awad said he was "outraged" and "really angry that despite all the work that we have been doing in our communities to serve the nation, we are treated with suspicion."

That's disingenuous and an attempt to play off public ignorance of CAIR's history.

Internal documents admitted into evidence show that Awad was part of a group called the "Palestine Committee," created by the Muslim Brotherhood to support Hamas in the United States politically and financially. Awad's name is listed on the committee's phone list. 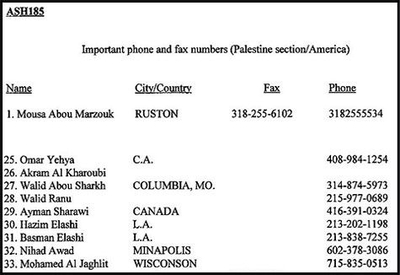 And he participated in a 1993 meeting of Hamas members and supporters in Philadelphia to discuss how they can "derail" the new U.S.-brokered Oslo peace initiative without exposing themselves as Hamas supporters. Awad was among those who used an ineffective code when referring to the terrorist group, reversing the letters and calling it "Samah."

That's just a fraction of Awad's "exemplary" record. Rather than address the evidence, Greenwald and Hussain dismiss the attention on CAIR as the product of it being a "primary target of hardline neoconservatives after 9/11."

Awad is quoted as saying CAIR itself has never been charged with any wrongdoing, yet numerous CAIR officials have been charged, convicted and/or deported for various offenses, including terrorism-related violations.

The story notes that the FBI cut off interaction with CAIR in the wake of the Holy Land case, and it quotes Awad saying, "The government knows very well that I am not a foreign agent."

In April 2009, an FBI official explained its justification for cutting off CAIR's outreach access. Holy Land trial evidence "demonstrated a relationship among CAIR, individual CAIR founders (including its current ... Executive Director) and the Palestine Committee," a letter from Assistant FBI Director Richard Powers to U.S. Sen. Jon Kyl said. "Nevertheless, until we can resolve whether there continues to be a connection between CAIR or its executives and HAMAS, the FBI does not view CAIR as an appropriate liaison partner."

In the story, Greenwald notes that he has spoken at CAIR conferences. Those appearances, and what he said during them, show an inherent bias. For example, at the CAIR-San Francisco chapter's 2012 banquet, Greenwald blasted prosecutions for providing material support to terrorists. "[W]hat you see is repeatedly prosecution based not on any acts that those people undertook, but on the ideology and political principles that they've expressed, which is a core violation of the First Amendment free speech guarantee," he said.

In a 2010 speech at the Brooklyn Law School, Greenwald said the very term "terrorist" is used for "mischief and so much of the evil that happens" because it has no real meaning. "It essentially means anybody who defies the will and the wishes of the United States and Israel," he said. "And the Israelis and the Americans are free to engage in pure acts of terrorism but have constructed the definition in a way both formally and culturally so as to inherently exclude whatever they do."

In the story, he minimizes the case against Sami Al-Arian, writing that "many civil libertarians regard as prosecutorial overreach motivated by anti-Muslim hysteria." He doesn't acknowledge that it's exactly the view he holds, celebrating the recent end of a contempt case against the former Palestinian Islamic Jihad board member on Twitter June 27.

Support for Al-Arian was offered by Agha Saeed, another of the five highlighted in the story, as a reason why he might have drawn scrutiny. But Saeed, also endorsed "armed resistance" for Palestinians: "United Nations has a resolution…which says… people in Palestine have the right to resist their oppression by using all means including armed resistance," he said during a 1999 ISNA conference.

Two years earlier, he spoke at a conference organized by the Islamic Association for Palestine (IAP). Like CAIR, the IAP is identified in internal documents admitted into evidence during the Holy Land prosecution as an arm of the Muslim Brotherhood's Hamas-supporting Palestine Committee.

None of this likely was sufficient to secure a Foreign Intelligence Surveillance warrant, but it shows Saeed endorsed violence and worked with people tied to a Hamas front network.

It may turn out that some, or all five, of the people in Greenwald and Hussain's story drew attention after some form of communication with someone outside the United States already on the radar of our intelligence services. Or, it might turn out that they were there in error. We're in no position to say. And that's the point. Neither is Glenn Greenwald.

Greenwald not who he says he is

Greenwald's link to the Muslim Brotherhood was news to me--but I'm not surprised. The whole "Snowden archive" stinks to high heaven. Crytome.org estimated that it will take something like 50 years to release all of the documents at the rate that they are being released. Something like 1% have been released thus far. Why dribble them out? Cryptome asks the same question, of which no one, Greenwald included, has an answer.

This may be an odd way of analyzing the documents thus far released, but the "documents" are not in fact valid NSA documents at all, which the NSA knows. Anyone that has been in business, college, etc., has had to sit through Powerpoint presentations put together by someone with minimal computer savvy. Text with run-on sentences, cheesy graphics, etc. But the NSA has the creme of the crop as far as computer geeks and we are to believe that most of the "documents," which are in fact slides from Powerpoint presentations, were prepared by high-level, computer savvy NSA operatives? Hardly likely.It looks like they were put together by a sixth grader after taking a computer class.