House Democrats Turn to the Wrong Muslims for SOTU

As many as 25 House Democrats are expected to have Muslim guests during Tuesday night's State of the Union speech. It's in response to a call from Democratic National Committee chair Debbie Wasserman Schultz and Minnesota Rep. Keith Ellison, the first Muslim voted into Congress, to counter an "alarming rise in hateful rhetoric against Muslim Americans and people of the Islamic faith worldwide."

The gesture might not generate much more than a shrug, except that in at least two cases, Democrats invited officials from a group the FBI formally avoids due to historic ties to a Hamas support network. Delray Beach Rep. Alcee Hastings invited Nezar Hamze, regional operations director for the Council on American-Islamic Relations (CAIR) in Florida. And San Jose, Cal. Rep. Zoe Lofgren invited Sameena Usman, a 10-year veteran government relations official with CAIR's San Francisco chapter, the Investigative Project on Terrorism has learned.

CAIR officials routinely accuse federal law enforcement of entrapping otherwise innocent and peaceful Muslims in order to gin up terrorism prosecutions. Hamze's colleagues in CAIR-Florida are helping a family sue the FBI over the 2013 fatal shooting of a terror suspect who attacked agents after extensive questioning.

Usman's office published a notorious poster urging Muslims to "Build a Wall of Resistance [and] Don't Talk to the FBI." For its part, the FBI cut off contact with CAIR, except in investigations, in 2008 based on evidence its agents uncovered which placed CAIR in a Hamas-support network in the United States. Until it can be shown that those connections no longer exist, an FBI official explained in 2009, CAIR is not "an appropriate liaison partner."

In addition, several CAIR officials have compared Israel to ISIS.

Calls to press contacts in Lofgren and Hastings' offices were not returned Monday.

Last month, the IPT provided exclusive details from eyewitness accounts about CAIR's creation, including an account of how a co-founder sought approval from the Egyptian Muslim Brotherhood for CAIR's bylaws, and how Executive Director Nihad Awad's move to Washington was "in order to represent Hamas."

Hastings and Lofgren either failed to check out their guests' employer or they don't care. These connections have nothing to do with the faith of CAIR officials. But the organization has a record that elected officials stubbornly insist should be ignored.

Unfortunately, this is part of a pattern of outreach House Democrats seek out with the wrong people. Last month, CAIR-Florida's Hassan Shibly was invited to the White House for a discussion about religious discrimination. Then, as with the State of the Union speech, no one from the new Muslim Reform Movement – which issued a declaration clearly rejecting "interpretations of Islam that call for any violence, social injustice and politicized Islam" and standing for "peace, human rights and secular governance." 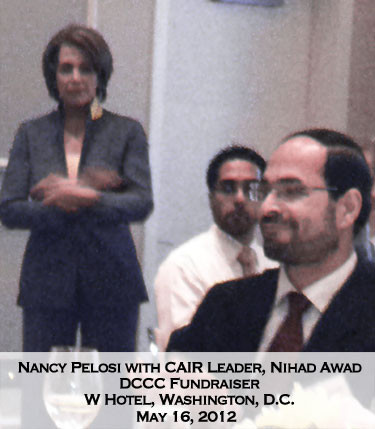 In 2012, House Minority Leader Nancy Pelosi sat with Awad, the only executive director in the organization's history, at a fundraiser for the Democratic Congressional Campaign Committee.

A seat in the House chamber for the State of the Union bestows undeserved clout to the CAIR officials. And, in trying to show the public that American Muslims are not a monolithic group of radicalized Islamists, Hastings and Lofgren are doing their cause more harm than good.

Why do these democrats not know who they are dealing with. Why do they not invite Dr. Juhdi Zasser.