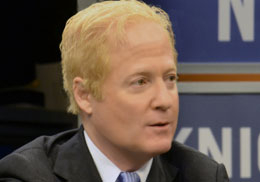 Steven Emerson is considered one of the leading authorities on Islamic extremist networks, financing and operations as well national security and intelligence. He is the Executive Director of The Investigative Project on Terrorism, a non-profit organization that maintains one of the world's largest storehouses of archival data and intelligence on Islamic and Middle Eastern terrorist groups.

The website of the Investigative Project on Terrorism contains a massive archival data base of documents, dossiers and thousands of original investigations into Islamist terrorism and radical groups.

Emerson and his staff frequently provide briefings to U.S. government and law enforcement agencies, members of Congress and congressional committees, and print and electronic media on terrorist financing and operational networks of Al Qaeda, Hamas, Hezbollah, Islamic Jihad, and the rest of the worldwide Islamic militant spectrum.

Emerson launched The Investigative Project on Terrorism in 1995, following the November 1994 broadcast of his documentary film, "Jihad in America," on PBS. The film exposed clandestine operations of militant Islamic terrorist groups on American soil.

For the film, Emerson received numerous awards including the George Polk Award, one of the most prestigious awards in journalism, for Television Documentary in 1994. He also received the Tom Renner Award from the Investigative Reporters and Editors Organization (IRE) for best investigative reporting all categories in 1994. The award from IRE was the fourth he had received from that group. The documentary was also featured on 60 Minutes.

Emerson was an assistant producer on the HBO docu-drama "Path to Paradise" about the 1993 WTC bombing. He was a consulting producer to the TV series "24."

In 2013, he produced a brand new documentary called "Jihad in America: the Grand Deception" (www.granddeception.com) which is an expose of the covert infrastructure and influence of militant Islamic groups like the Muslim Brotherhood and Hamas in the US. The film won the following awards:

Emerson is recognized as one of the first terrorism experts to have testified and warned about the threat of Islamic militant networks operating in the United States and their connections worldwide. In a pioneering congressional testimony delivered in 1998, he specifically warned about the threat of Osama Bin Laden's network. Nearly every one of the terrorist suspects and groups first identified in his 1994 film have been indicted, convicted, or deported since 9-11.

Emerson is the author or co-author of six books on terrorism and national security, including:

Prior to his production of Jihad in America, Emerson worked as a special correspondent for CNN for 2 years and previously as a senior editor at US News and World Report for 4 years. Prior to his position at that magazine, he had been a freelancer for the New York Times Magazine and the New Republic. His first job in Washington DC in 1977 was as a staff researcher for the Senate Foreign Relations Committee. He has a BA and MA from Brown University and once ran a marathon in 2 hours, 59 minutes, a feat he was never able to repeat again.