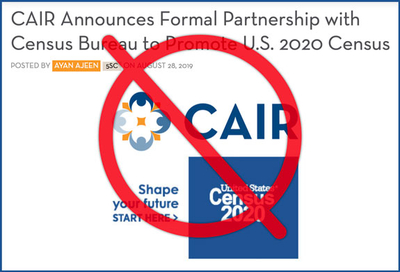 The Council on American-Islamic Relations (CAIR) will not be an official partner with the U.S. Census Bureau for next year's national population count.

CAIR issued a statement Wednesday touting a formal partnership, which it said aimed "to promote American Muslim participation in the 2020 Census and to better represent the most diverse Muslim population in the world."

The Investigative Project on Terrorism reported the news Wednesday afternoon, noting that federal law enforcement believes CAIR is not "an appropriate liaison partner" due to roots CAIR founders and the organization itself have in a Muslim Brotherhood Hamas-support network in the United States. The Census Bureau did not respond to a request for comment for that story.

Fox News host Tucker Carlson briefly spoke about the CAIR-Census Bureau partnership Thursday evening, saying a Commerce Department official told him that, "based on further review, the Census Bureau is no longer partnering with CAIR."

CAIR was an unindicted co-conspirator in the 2008 Hamas-financing trial against the Texas-based Holy Land Foundation for Relief and Development (HLF). HLF and five former officials were convicted of illegally routing $12 million to Hamas, which the United States has designated as a terrorist organization.

Evidence in that trial largely came from communication among the conspirators that was intercepted by the FBI, and from internal correspondence and records seized via search warrants. It is that evidence that prompted the FBI to cut off all non-investigative communication with CAIR in 2008, a policy that remains in effect.

The evidence shows that CAIR co-founder Omar Ahmad played a significant leadership role in the Muslim Brotherhood's "Palestine Committee." It also places co-founder Nihad Awad, the only executive director in CAIR's 25-year history, on a roster of a Palestine Committee members. He also participated in a secret, 1993 gathering of Hamas-supporters who wanted to undermine the U.S.-brokered Oslo Accords. The Accords including a Palestinian recognition of Israel's right to exist, and elevated the Fatah movement – Hamas's rival – to leadership in the newly-created Palestinian Authority.

Palestine Committee members opposed both elements which they saw as antithetical to Hamas ambitions. They were advised not to mention Hamas by name, though, encouraged instead to say "Samah," which is Hamas spelled backward.

"If there is a political issue, a Samah's input, for instance, about this or that, we inform people to contact their representatives," Awad said during the Philadelphia meeting.

Independent of court evidence, the FBI also spoke with eyewitnesses who placed CAIR's founding inside the Hamas-support effort, records obtained pursuant to the Freedom of Information Act show.

Evidence presented in the HLF prosecution prompted the presiding judge to find "at least a prima facie case as to CAIR's involvement in a conspiracy to support Hamas."

"CAIR," prosecutors wrote, "has been identified by the Government at trial as a participant in an ongoing and ultimately unlawful conspiracy to support a designated terrorist organization, a conspiracy from which CAIR never withdrew."

Meanwhile, CAIR has a history of inflating the Muslim-American population, claiming more than 6 million people in 2001, when a formal polling outlet placed the real number at less than half. Several CAIR leaders have made anti-Semitic statements.

It may have come late, but the Census Bureau now seems to agree with the FBI. CAIR's record makes it difficult to see the group "as an appropriate liaison partner."