While the world recoils in horror at the brutality shown by the Islamic State in Iraq and Syria, an attorney for the Council on American-Islamic Relations (CAIR) apparently gave serious consideration to a wild conspiracy theory alleging that ISIS is a Mossad and CIA "proxy force." 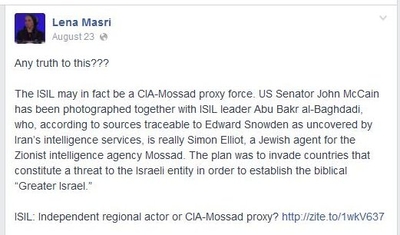 Lena Masri, a CAIR attorney in Detroit, linked from her Facebook page Aug. 22 to an article by Iran's official news agency, IRNA, about ISIS and its rise to prominence. Among its claims, ISIS leader Abu Bakr al-Baghdadi, the self-proclaimed caliph of the Islamic State, "is really Simon Elliot, a Jewish agent for the Zionist intelligence agency Mossad."

The notion rated a "pants-on-fire" from fact-checking site "Pundit Fact," three days earlier, but Masri chose instead to put the question out to her Facebook friends. "Any truth to this???" she wrote.

Part of CAIR's unstated mission is to deflect attention from the theological underpinnings driving terrorist groups like ISIS, al-Qaida and Hamas. It's a task made more difficult when ISIS proclaims itself the "Islamic State" and a regional caliphate ruled by draconian punishments like book-burning, the stoning of adulterers, and the murder of apostates. Masri's post about ISIS came just days after video surfaced of American journalist James Foley's beheading.

Masri's posting is the latest in a long line of reckless social media postings by CAIR officials. Similar to Masri, CAIR national spokesman Ibrahim Hooper said he suspected a radical Islamist website which issued threats against producers of the television show "South Park" may not be legitimate.Most Muslims, he claimed, "suspect [the sites] were set up only to make Muslims look bad."

Last week, the day after Foley's murder was reported, CAIR Executive Director Nihad Awad bracketed Twitter posts criticizing ISIS brutality with a claim that it is Israel which poses the greatest threat to world peace and security.

CAIR officials also have shown an affinity for the messages issued by Iran's official mouthpieces. CAIR officials were frequent guests on Iran's English-language news outlet, Press TV, appearing to back away from the network only after being called out publicly. And Walid was among CAIR officials who dismissed allegations in a federal indictment that traced Iran's elite Qods Force to a plot to assassinate Saudi Arabia's United States ambassador in Washington, D.C. – a potential act of war.

Prosecutors had evidence showing a Qods Force official wired $100,000 as a down payment on the ambassador's assassination. The case ended with the main suspect pleading guilty and receiving a 25-year prison sentence.

In an unrelated case, the FBI seized internal documents from a Hamas-support network in America which place CAIR and its founders firmly under its wing. Those records were admitted into evidence in federal court. CAIR treats this documented, court-tested connection as a wild, Islamophobic concoction.

In reality, though, there's no need to ask "any truth to this?"

Most people of all nations and ethnic backgrounds have no idea of how or why the world's wheels keep turning as they do. It is lucky for them that they remain oblivious.