Turkey's Assault on Kurds: The Silence of the Islamists 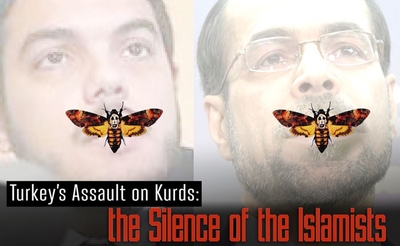 A stateless people comprised of a large number of Sunni Muslims is being bombarded by a country with an overwhelming military advantage. It's the kind of thing that normally has American Islamist groups organizing protests and lighting up social media feeds.

But this time the aggressor is Turkey's authoritarian leader Recep Tayyip Erdogan, a man who has positioned himself as a defender of violent Palestinian terrorists like Hamas, and as a patron for Muslim Brotherhood leaders who sought refuge from Egypt's military rulers. He is bombing Kurdish targets in northern Syrian and has sent his troops into the country.

The Kurdish Red Crescent claims there have been at least 11 civilian deaths, including an 11-year-old girl, and 28 wounded. Erdogan's invasion displaced at least 60,000 people, many of whom have nowhere to go.

Kurdish victims fail to generate similar concern. Images on social media show Turkish bombing and shelling of civilians all along Syria's northern border. Civilians in the town of Kobane, who withstood a 2014 ISIS onslaught, found themselves under attack Thursday by Turkish artillery.

Turkish artillery hit civilian areas of the northwestern Syrian town of Qamishli on Wednesday and Thursday, where the Syrian Democratic Forces (SDF) headquarters is located, Kurdish Twitter sources reported. Video showed explosions in the town and civilian casualties. Qamishli's inhabitants are a mixture of Kurds, who are mostly Sunni Muslim, and Syriac Christians.

An ISIS sleeper cell detonated a car bomb in Qamishli's restaurant district on Friday. Casualty figures were not immediately available.

Turkey claims it is conducting an anti-terrorist operation against the Kurdistan Workers Party (PKK), from which the largest SDF faction the YPG descends. But the PKK's ideology has moved away from revolutionary Marxism and now supports autonomy within Turkey, American Enterprise Institute scholar Michael Rubin noted in a January National Interest column. Erdogan sought peace with the PKK before turning against it in 2015.

"To refuse to acknowledge let alone appreciate the evolution of the PKK and to refuse to recognize the achievements and stability of Syrian Kurdish governance against the backdrop of a horrendous civil war not only does an injustice toward the Kurds, but it also signals that in order to achieve their basic human rights, they must fight to the death in Turkey...," Rubin wrote.

Turkey's offensive has united political voices in the United States, primarily because the Kurds proved to be the only reliable force against ISIS. In contrast, Arab militias backed by the West inevitably turned their weapons over to ISIS, al-Qaida, or other jihadists. Kurdish forces successfully routed ISIS over the past few years with the help of American military advisers and airpower.

Western powers promised the Kurds a state of their own following World War I but that failed to materialize. Kurds are spread out across Turkey, Syria, Iraq and Iran. The PKK has fought a decades-long war with Turkey for autonomy and self-governance. Kurds are denied their language and identity by Ankara, which belittles them as "Mountain Turks."

"The Turkish military incursion into Syria does not please us as Arabs," Abuirshaid wrote on Facebook, "but Turkey is practically forced to, and it has (Turkey)- to this very day- been the one who stood with the Syrian people the most ..." He claimed Turkey "is trying to prevent the establishment of a 'Kurdish Israel' along its southern borders.

The leader of the U.S. Council of Muslim Organizations – an umbrella group of "major national American Muslim organizations," also declared support for the Turkish invasion.

"What a travesty, progressive media wants to protect YPG, a terrorist affiliate of PKK, while innocent Syrians are slaughtered daily! Only Turkey carried the burden to host millions of Syrians & protect them. Who's (sic) agenda & interest is served here? We are watching!" USCMO Secretary General Oussama Jammal tweeted on Tuesday.

Los Angeles chapter Executive Director Hussam Ayloush was the only CAIR official to speak about the invasion.

"Dear Western politicians/commentators and sudden experts on Syria, did it occur to you to ask how the 12 million refugess (sic) feel about Turkey establishing a safe zone in Syria that's free from Assad and terrorists?" Ayloush wrote.

That safe zone involves resettling Syrian refugees from other parts of Syria who live in Turkey, Erdogan said in a United Nations speech last month. Jihadists also reportedly are involved in the invasion force alongside the Turkish regular army. 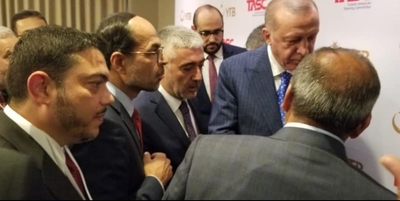 The same Islamists also have been noisy about India's revocation of the special status of the territory of Jammu and Kashmir.

"We have to reject Hindu supremacy and assert that if India wants to be a democracy it has to live up to the standard of a democratic state," AMP Chairman Hatem Bazian said at a Sept. 29 rally on Kashmir posted on AMP's Facebook page. "India has become one of the largest purchasers of weapons. Supremacy is always used as militarism in a way that's used to assert its right to rule. India has been spending massively.

"When we say that we are for peace and for justice, we are against weapons of mass destruction, against using nationalism as a way to kill and separate people."

Bazian has made no mention of the Turkish invasion.

Israeli attacks against Hamas and other Palestinian terrorists are retaliation for rocket attacks, but the Syrian Democratic Forces (SDF) that consists of Kurds, Arabs and Syriac Christians bent over backwards to tell Turkey it was not a threat. SDF soldiers pulled back from defensive positions along the Turkish-Syrian border in weeks leading up to the invasion.

None of it was enough for Erdogan, who is determined to strike out at the very people who helped defeat ISIS. Apparently, that's just fine with American Islamists.