Sarsour and Her Islamist Entourage Protect Rashida Tlaib From Critic 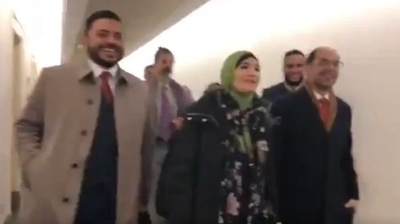 Nomani, a longtime CAIR critic, posted video of the encounter.

The group was on Capitol Hill to lobby against a resolution condemning anti-Semitic statements from Tlaib's colleague, U.S. Rep. Ilhan Omar even though the resolution does not name Omar.

From its creation, CAIR was part of a Hamas-support network called the Palestine Committee. Awad was featured on a list of Palestine Committee officials whose mission, the Fifth U.S. Circuit Court of Appeals found, was to "support Hamas from abroad."

Sarsour has espoused anti-Semitic smears worse than Omar's and advocates for one-state solution to the Israeli-Palestinian conflict – meaning Israel would be eliminated. Rejecting Israel's existence is a form of anti-Jewish bigotry according to the State Department's definition of anti-Semitism.

"I am an unapologetic pro-BDS, one-state solution supporting resistance supporter here in the U.S.," Sarsour told an audience at the Islamic Society of North America's (ISNA) annual convention in September, the Investigative Project on Terrorism exclusively reported.

These are the types of characters who meet privately with Rashida Tlaib to defend Ilhan Omar.

Criticism and condemnation rained down last month on Omar, a Minnesota Democrat, after she tweeted, "It's all about the Benjamins baby" to explain why she and fellow Tlaib draw attention for their "criticisms of Israel."

Who is the source of this popular reference to cash? "AIPAC!" Omar added, referring to the American Israel Public Affairs Committee.

Facing serious backlash from many in her party, Omar issued a caveated apology. Omar has since doubled down on purveying anti-Semitic tropes, by depicting support for Israel as a form of dual allegiance.

From the outset, Omar and Tlaib's Islamist backers immediately came to their defense. Wednesday's footage shows these radical supporters will not back down.