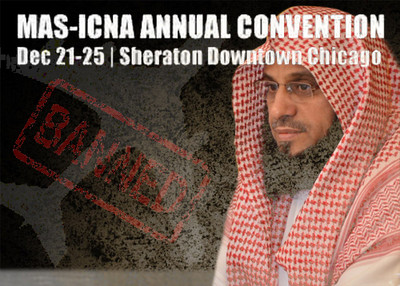 The head of the Council on American-Islamic Relations (CAIR) vows to complain to U.S. Department of Homeland Security officials after they blocked a radical Saudi cleric from entering the country this week to attend a national Islamist conference in Chicago.

Sheikh Ayed al-Qarni was scheduled to speak twice during the Muslim American-Society (MAS)/Islamic Circle of North America (ICNA) national convention Dec. 22-25. But a statement released during the convention expressed "the unpleasant and saddening news" that al-Qarni had been removed from his flight from Saudi Arabia despite having a visa from the U.S. embassy, and that he appears to be on the U.S. "no-fly list." Al-Qarni is described as "one of our great speakers" and as someone known "for his logical discourse and balanced views, he promotes understanding and collaboration between all people, regardless of their faith, background, or language."

Al-Qarni has advocated jihad in the past and his preaching on the subject has been described as influential among al-Qaida followers.

CAIR Executive Director Nihad Awad told an Arabic news outlet that he would protest al-Qarni's exclusion with DHS and State Department officials. "We defend all Muslims who are subject to arbitrary measure, and by this logic, we will act but not formally plead, unless we obtain authorization from him."

It's an ironic protest to make in light of a public relations campaign orchestrated by CAIR's Chicago chapter. "MyJihad" aims to show non-Muslims that the term jihad is more about peaceful, personal attempts at overcoming challenges than about calls for violence and terror.

Through Awad, also a listed speaker at the convention, CAIR is fighting to bring a Saudi cleric into the United States who has argued the exact opposite message. During a 2005 sermon flagged by the Middle East Media Research Institute (MEMRI), al-Qarni called the jihad against American forces in Fallujah "a source of pride … downing their planes, destroying equipment, slaughtering them, taking them hostage, and proclaiming 'Allah Akhbar' from the mosques, and the worshippers and the preacher cursing them in their prayers, and then come others begging for forgiveness, and requesting a dialogue and a ceasefire and negotiations. Who can say even one word against this true Jihad against these colonialist occupiers?" [Emphasis added]

He belittled Muslims who failed to take action, including "harming the Jews." He invoked Israel's targeted killings of Hamas leaders Ahmed Yassin and Abdel-Aziz Rantisi, saying he prayed that Allah "will destroy the Jews and their helpers from among the Christians and the Communists, and that He will turn them into the Muslims' spoils. I praise the Jihad, the sacrifice, and the resistance against the occupiers in Iraq. We curse them all of them every night and pray that Allah will annihilate them, tear them apart, and grant us victory over them..."

"Throats must be slit and skulls must be shattered," al-Qarni said. "This is the path to victory, to shahada, and to sacrifice."

This was no one-time rant.

"We were also influenced by the sermons delivered by some speakers in the mosques in Jedda about jihad in Afghanistan. The cassettes on jihad that influenced us most were those by Shaykh A'id [Ayed] al-Qarni, especially the first cassette, titled 'Nights in Afghanistan,' and the second cassette, 'The Afghanistan I saw. Al-Qarni used to speak, enjoin, and call for jihad in an astonishing way."

Al-Qarni also attracted Western attention in 2004 when he called it a sin for women to drive cars in Saudi Arabia. The practice would spread corruption and lead to "mingling between the sexes, men being alone with women and the destruction of the family and society in whole."

On top of all that, he has been accused of intellectual dishonesty. Saudi Arabia's Ministry of Culture and Information fined al-Qarni 300,000 Saudi riyals earlier this year for allegedly plagiarizing chapters from a book by a Saudi woman.

But even with al-Qarni's absence, the MAS-ICNA conference still featured speakers who advocate violent jihad. Among them, Kifah Mustapha spoke at, and promoted the event, saying, "It's about learning from the scholars and the teachers who are coming from all over the world to be with you in these few days."

Mustapha was a paid fundraiser for the Holy Land Foundation for Relief and Development, which in 2008 was convicted of funneling more than $12 million to the terrorist group Hamas. He also performed at HLF and other events in a singing troupe known as the al-Sakhra band. In one video among many similar ones entered into evidence at the trial, Mustapha joins in singing:

O mother, Hamas called for Jihad.
Over mosques' loudspeakers, with freedom.
Every day it resists with stones and the dagger.
Tomorrow, with God's help, it will be with a
machine gun and a rifle.

Other exhibits – internal records seized by FBI agents – showed that officials from both CAIR and the Holy Land Foundation were part of an umbrella group known as the "Palestine Committee." That group, records show, was created by the Muslim Brotherhood in America to help the Hamas terrorist group politically and financially.

MAS, one of the convention sponsors, also has direct ties to the Muslim Brotherhood, as documented by the Chicago Tribune in 2004, and as described in sworn testimony last spring by Abdurrahman Alamoudi, once the nation's most influential Islamist activists, who is currently serving a 23-year prison sentence in a terrorism financing case.

In addition, convention speaker Jamal Badawi is a MAS founder and is listed on the first page of a 1992 telephone directory of Brotherhood members admitted into evidence in the Holy Land Foundation trial.

Badawi praised the jihad of Gaza-based terrorists during a February 2009 speech on "Understanding Jihad and Martyrdom," at the Chebucto Mosque in Halifax, Nova Scotia. He also criticized Muslims who considered attacks on Israelis to be terrorism.

"They [moderate Muslims] made this accusation, but they did not even stop at accusations, they did cooperate with the enemies of humanity, to kill their own brothers and sisters," he said.

He led an Islamonline.net dialogue session three years earlier called "Martyrdom in Islam: Let's Discuss it." In it, he compared suicide bombers to "freedom fighters" fighting the Nazis or the Japanese kamikazes fighting the Americans.

He also has openly questioned whether Islam and democracy are compatible. "The Qur'an and Prophetic tradition are the ultimate constitution," he wrote in 2004.

Yet another MAS-ICNA convention speaker urged Muslims to help finance jihad. Ragheb Elsergany's past convention speeches were so extreme, organizers promised not to invite him back. But this year's appearance is at least the second since that pledge was made.

During the 2009 conference, Elsergany spoke of jihad as one of the greatest acts to please Allah, "and one of the greatest of them is supporting the fighters, and the mujahideen [Islamic warriors] and the besieged, and those in need there in Palestine," he said in an Arabic session entitled "The Gaza Struggle."

Elsergany then pushed people to donate money to the cause. "Allah has entrusted us with the money for our brothers and sisters, to confer upon the people of Palestine the surplus of our money. This is their right," he said. "They are the ones who face the Zionists with their chests, their nerves, their lives, their children, their holy places and their sacred places. They are the ones standing [in] front of us and we are standing behind them. You Muslims are abandoning this role."

In the 2011 conference, Elsergany predicted a day when "all of Palestine" would be liberated. The rise of Islamist governments in the Middle East and North Africa was clearing the way for "the Zionist entity" to "vanish absolutely," he said.

The United States government may have kept al-Qarni out of the country, but the MAS-ICNA convention still featured speakers who have called for the destruction of an existing nation, who have praised jihad as the use of violence to praise Allah, and who have documented ties to the Muslim Brotherhood.

Awad's pledge to take al-Qarni's case to decision-makers in Washington so far has been made only in Arabic media with no accompanying release for U.S. audiences. It's no wonder.

Why are these Islamic thugs allowed to operate within the borders of the United States?

They should be deported.

I have to laugh, not regarding this article which I find very interesting, but the instructions below about "name calling." I had just printed out a Newsmax report that Egypt's (President) Morsi in response to a question stated: No Peace With Descendants of 'Apes and Pigs.'

But I guess that is no surprise because usually Bullies are not bound by any sensitivity rules regarding others.