So that's how the Council on American-Islamic Relations (CAIR) deals with "Zionism on [a] daily basis"?

Less than a week after CAIR co-founder and Executive Director Nihad Awad said combating the idea of a Jewish homeland is a daily mission at his "civil rights" group, National Strategic Communications Director Ahmed Rehab posted an ugly rant cursing and vilifying Zionists and France. 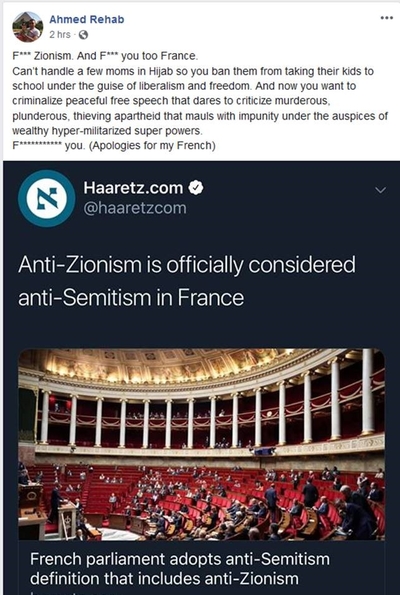 Rehab, who also runs CAIR's Chicago office, was reacting to a French Parliament decision to adopt the International Holocaust Remembrance Alliance (IHRA) anti-Semitism definition. "Denying the Jewish people their right to self-determination," the crux of Zionism, is among the main examples of anti-Semitism cited.

According to Mr. Rehab, this resolution shows that France wants "to criminalize peaceful free speech that dares to criticize murderous, plunderous, thieving apartheid that mauls with impunity under the auspices of wealthy hyper-militarized super powers. F*********** you. (Apologies for my French)."

This week's resolution was proposed by French Parliament Member Sylvan Maillard in response to the alarming escalation of anti-Semitic acts in France.

"For some years now, France, the whole of Europe, but also almost all Western democracies are facing a rise in antisemitism," Maillard's resolution states. "Anti-Zionist acts can at times hide antisemitic realities. Hate toward Israel due to its perception as a Jewish collective is akin to hatred toward the entire Jewish community." In France today, "dirty Zionist... means dirty Jew," Maillard told the French newspaper La Croix. 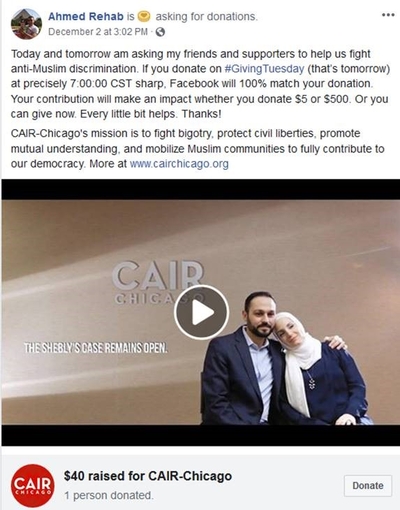 "F*** Zionism. And F*** you too France" is an odd way to "promote mutual understanding."

But it is consistent rhetoric from a CAIR official. The organization urged supporters to lobby against the "Anti-Semitism Awareness Act of 2019." The Act would direct the Department of Education to adopt the same IHRA definition of anti-Semitism that set Rehab off this week. The State Department embraced the language in 2016.

Rehab's colleague, San Francisco chapter leader Zahra Billoo, has repeatedly acknowledged she does not accept Israel's right to exist. Los Angeles chapter chief Hussam Ayloush is fond of drawing a moral equivalence between Americans who move to Israel and join its army and Americans who left to fight for ISIS.

CAIR continues to turn to activist Linda Sarsour to speak at its fundraisers, despite Sarsour's long record of anti-Semitism.

But the anti-Zionist/anti-Semitic rhetoric from Rehab and so many of his colleagues makes sense when looking at CAIR's documented history in a Hamas-support network. Awad, the only executive director the organization has had, openly stated his support for Hamas in 1994, the year CAIR was created. Months later, CAIR was listed among the branches of a Muslim Brotherhood-run Hamas support network in the United States called the "Palestine Committee."

CAIR and its leaders keep showing us exactly what they think. More elected officials and journalists who treat CAIR as reputable should take note.