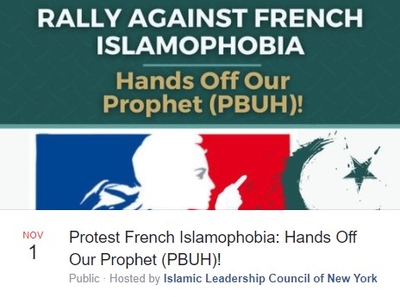 A consortium of New York mosques plans to protest at the French Consulate in Manhattan this Sunday to express their rage at Emmanuel Macron's support for publishing caricatures of Islam's prophet Muhammad.

"The Muslim world will not tolerate such blatant disrespect of the Prophet Muhammad (PBUH) and stands in solidarity with their French Muslim brothers and sisters."

The release was issued before Thursday morning's terrorist attacks in France, including a triple murder at a Nice church in which a woman was beheaded. But its references to "provoking the Muslim world" which "will not tolerate" such expressions came well after a similar attack Oct. 16 left middle school teacher Samuel Paty beheaded for showing his class Muhammad cartoons as part of a lesson on free speech.

No one is saying the Majlis Ash-Shura is advocating for violence, but it should be careful not to incite people looking for justifications for lashing out. And it is not the only American Islamist group doing so. The rally is drawing support from the anti-Israel group American Muslims for Palestine and several New York chapters of the Muslim American Society, a group founded by Muslim Brotherhood members in the United States.

"Once again, Islamists seek to punish Westerners for engaging in freedom of speech concerning Islam. It started with The Satanic Verses in 1989, followed by the U.S. Supreme Court, Jerry Falwell, Newsweek, the Danish cartoons, Pope Benedict XVI, and others. Will the West be intimidated or stand up for its values?" asked Daniel Pipes, president of the Middle East Forum and author of The Rushdie Affair: The Novel, the Ayatollah and the West.

The crisis in France offers a challenge to Western "progressives" who seem far more tolerant of conservative Islam than any other faith. Few things can be more illiberal than advocating some beliefs should be immune from criticism or mockery. And it is inherently bigoted to single out one faith for this exemption.

Conservative cleric Yasir Qadhi, a frequent speaker at fundraisers and conventions for Islamist groups including the Council on American-Islamic Relations (CAIR) and the Islamic Society of North America (ISNA), posted a warning to Macron that "people come and go, and you too shall leave this earth. Nations rise and fall, and a time will come when France itself shall not exist. But rest assured, the legacy of the Prophet, and the love that all Muslims have for him, shall continue to live long after you and your nation are relegated to the ink of history books."

Qadhi also signed on to a petition condemning "the recurrent insults towards the Prophet Muhammad (peace and blessings be upon him), and the insistence of the French government to defend them. This crosses a red line that rightly draws the contempt of Muslims across the world."

Among the 68 other signatories was Sami Al-Arian, a former U.S. resident and secretary on for the terrorist group Palestinian Islamic Jihad's governing board.

"Make them hurt," the group Muslim Matters wrote on Twitter. "Make Macron eat his words. Make France pay for its hypocrisy and abuse of Muslims. Its institutionalized Islamophobia. Make French companies feel the angst of those who love the Prophet Mohammed."

CAIR, an organization embraced in progressive circles, joined in calling for a boycott on French goods that has been pushed by Turkey's Islamist President Recep Tayyip Erdogan and Pakistan's Imran Khan.

Executive Director Nihad Awad condemned the attack as "a horrific crime against innocent people in their church," but then criticized Macron, not the killer. "France needs a leader who unites his nation on the basis of equality for all and mutual respect," he wrote, "not division and political games."

CAIR also wants the U.S. Commission on International Religious Freedom to investigate what it called the "collectively smearing and punishing [of] the French Muslim community." That refers to Macron's decision to close a Paris mosque that posted a video inciting anger against Paty, calling him a "thug," and Macron's plans to reduce dependence on foreign imams in France and cut off public funding to Islamist civil groups that cannot embrace the country's republican principles.

After two brothers massacred 12 people at the Paris office of Charlie Hebdo, the magazine which published cartoons mocking Muhammad, anti-Semitic activist Linda Sarsour told a CAIR fundraising banquet that she rejected the Je Suis Charlie campaign meant to show solidarity with the victims and to stand for free expression.

"I am absolutely not Charlie. I am absolutely not going to say 'Je suis Charlie,'" Sarsour said to applause. "Because Charlie Hebdo chose to use his publication to vilify my faith, dehumanize my community, demoralize my prophet, and I absolutely will say you can have freedom of speech and I have the freedom to call you a bigot and a racist."

Charlie Hebdo was an equal opportunity offender which also mocked Christianity and Judaism. Though some might have been offended, no Christians or Jews sought bloody vengeance.

The United States has endured threats from people trying to impose blasphemy laws onto society similar to what France faces today, though thankfully none have culminated in successful attacks. In 2015, an alert police officer thwarted an attempted massacre at a "Draw Muhammad" contest in Garland, Texas.

Comedy Central censored an episode of "South Park" in 2010 that featured Muhammad in a bear suit. No image of Islam's prophet was ever shown – that was the joke – but show creators Trey Parker and Matt Stone still faced death threats.

"Muhammad is the only person in the world that can't get ripped on," the character Cartman said in the now-missing episode. A decade later, nothing has changed.

A decade after the South Park episode, and five years since the Charlie Hebdo massacre, we're still seeing rage and bloodshed over cartoons solely when they involve Muhammad.

Certainly Muslims, like everyone else, have a right to express themselves, and even to boycott. But when you're in lock-step with Ayatollah Khamenei, a theocratic dictator whose forces murder protesters, maybe Emmanuel Macron is not the problem.