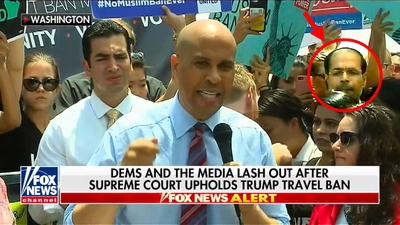 In jumping to appear before cameras and rallies to condemn this week's Supreme Court ruling on President Trump's travel ban, several elected Democrats empowered and legitimized an Islamist group whose leaders continue to engage in radical, incendiary speech.

At a rally Tuesday that was well covered by national news outlets, at least seven Democrats from the House and Senate spoke and shared the dais with Council on American-Islamic Relations (CAIR) Executive Director Nihad Awad. CAIR also was among the rally's 50 sponsors.

As we have repeatedly reported since 2009, the FBI has a formal policy prohibiting "outreach" – or communication outside of investigations – with CAIR due to its documented roots in a Hamas-support network created by the Muslim Brotherhood.

"[U]ntil we can resolve whether there continues to be a connection between CAIR or its executives and HAMAS, the FBI does not view CAIR as an appropriate liaison partner," then-Assistant Director Richard Powers wrote. That policy remains in effect.

Blumenthal exchanged a lengthy greeting with Awad (in the video, look behind the speaker at the two men spotlighted).

An FBI surveillance tape caught Awad attending a 1993 meeting of Hamas members and supporters in Philadelphia plotting how to "derail" U.S. peace efforts between Israelis and Palestinians. The group's opposition was rooted in the Oslo Accords' provisions which included recognizing Israel's right to exist, and its elevation of the secular Palestine Liberation Organization, which would marginalize the Islamist Hamas terrorist group.

"I am in support of the Hamas movement," Awad said during a panel discussion at Barry University in 1994. He repeated his support for Palestinian terrorist groups during a 2004 Al-Jazeera interview.

She also compares Americans who join the Israel Defense Forces (IDF) to those who join ISIS.

"Both ISIS and the IDF are violent, immoral gangs. They're literally baby killers," Billoo wrote in May.

"Do you know how many hundreds of Jewish American kids are recruited to join the Israeli occupation army?" Ayloush said. "No one has ever established a CVE program to see why normal American kids leave their homes to become part of an army committing war crimes... They go to the American Muslim community, although the number of Muslims who join ISIS and Al-Qaeda is ... tiny."

Billoo has a strong phobia of Jews with whom she disagrees. She expressed the horror of running into "Zionists war mongers from @AIPAC" in elevators on Capitol Hill during her participation in the US Conference of Muslim Organizations (USCMO)'s lobbying effort in May.

Despite its dubious history and record, Blumenthal has maintained a long relationship with CAIR's Connecticut chapter and its former Executive Director Mongi Dhaouadi. Dhaouadi believes that Palestinian violence against Israeli civilians is not terrorism.

"Resisting the occupation is NOT terrorism it is a legitimate right of defending one self from your land from real terrorists i.e. IDF," Dhaouadi wrote.

And a year ago, he shared a video from Abdel Majeed al-Zindani, considered a spiritual leader both to al-Qaida in the Arabian Peninsula and Osama bin Laden, on his Facebook page.

The old joke says "the most dangerous place in Washington" is between a politician and microphone. And it's a given that Democrats would want to be seen condemning a court ruling upholding Trump administration policy. But awareness also is key. Either the seven from Tuesday's rally didn't bother to read the list of sponsors or they saw CAIR was among them and thought that was just fine.

Either scenario is unacceptable.