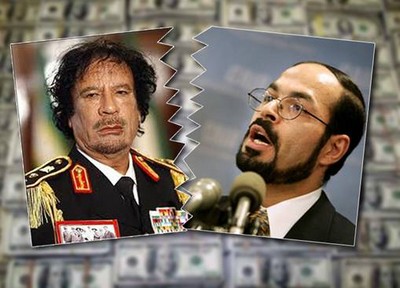 Nihad Awad, executive director of the Council on American-Islamic Relations (CAIR), asked Muammar Gaddafi to underwrite CAIR's efforts in the United States during a September 2009 audience with the Libyan dictator.

According to an account of the meeting in a Libyan news website, Awad was joined by two other leading CAIR officials in praising Gaddafi's leadership and asking him to help underwrite a program to distribute 1 million copies of the Quran to government officials and the general public in America and to help start up a new foundation Awad was trying to launch.

The account was published in Arabic by Libyalive.net, and was translated by the Investigative Project on Terrorism. Libyalive.net describes itself as "an independent Libyan electronic newspaper," but the story about Gaddafi's visit is attributed to the Jamahiriya News Agency, Libya's official state news service.

Now, after Gaddafi started killing his own people as he tries to fend off a popular uprising, Awad and CAIR have denounced him as a madman. They have organized rallies and news conferences demanding that violence against Libyan civilians by Gaddafi's forces stop.

"Join us to support the people of Libya against a dictatorship," a February 24 release from CAIR's Chicago chapter said.

Concerns over the Libyan government were overlooked in September 2009, when Gaddafi traveled to New York to speak to the U.N. There, Gaddafi ignored the 15-minute limit on speeches, going on a tirade about everything from the assassinations of Martin Luther King and John F. Kennedy to his belief that the U.N. Security Council was similar to al-Qaida, calling it the "terror council."

At a later reception with Gaddafi, Awad, national spokesman Ibrahim Hooper and Chairman Larry Shaw made a direct appeal to the Libyan leader to donate to CAIR programs.

"Your speech has had an impact in the hearts of many people in the world," Awad said. He hailed Gaddafi as "the world Islamic popular leader," saying "[w]e appreciate your efforts over the years, and wish also to extend your interest will extend to Muslims in America, God willing."

In addition to the Quran program, Awad asked for money to help launch the Muslim Peace Foundation. That group would work to "have an active role in American life so that we can repair the relationship [with the Muslim world] and restore it to what it should be," Awad said.

The foundation was created in May 2008, corporate records filed in Washington, D.C. show. Officers include Shaw and Awad, who is listed as Nehad Hammad. Awad also used the name Nehad Hammad in CAIR's founding articles of incorporation in 1994. During a 2003 deposition in a civil lawsuit, Awad acknowledged his "full and complete name is Nihad Awad Hammad."

A third Muslim Peace Foundation founder is listed as Winslow Seale. That is the name of Dar al-Hijrah mosque outreach director Johari Abdul Malik before his conversion to Islam. Records from the Department of Homeland Security obtained through a Freedom of Information Act request show that Dar al-Hijrah is considered "associated with Islamic extremists" and "has been linked to numerous individuals linked to terrorism financing."

"We hope for your noble generosity in taking this project under your wing," Awad told Gaddafi, "so you will be in the vanguard, as we have come to expect of you....God willing, you will as you have promised us, be the first to take the lead in this project."

In a radio interview Monday, Awad said the pitch came up empty. Because the request failed, he claimed, CAIR officials did no wrong soliciting Gaddafi.

"But we always hold our views on the principles of justice and human dignity very straight," Awad said on WPFW radio in Washington, D.C. "We never received a penny from his group, from his government. And in fact when he started abusing and killing civilians we condemned him and we support the international community's effort to restore justice and peace to Libya by protecting civilians. We're very, very principled when it comes to these matters."

The United States and other Western governments were not as principled, Awad said. "We should not wait until these regimes collapse so that we stand with the people who have been oppressed by these people ... Our foreign policy has to be aligned with our values, the values of equality, justice, freedom and all these things that we always try to spread around the world and democracy. So when we see an oppressive dictator persecuting his people, killing his people, if this is on the news we speak up. But if it's not in the news we ignore it."

Soliciting money from Gaddafi was not legal until 2007, when the United States removed Libya from its list of terror-sponsoring states. To get to that point, Gaddafi renounced terrorism, gave up his nuclear weapons program and compensated relatives of those killed on Pan Am Flight 103, which was blown up over Lockerbie, Scotland in a Libyan plot.

CAIR officials loudly condemn Gaddafi's brutal response to the popular uprising against his regime. "Mr. Gadhafi is nothing short of a madman like those who came before him, like Mussolini and Hitler," said Dawud Walid, the head of CAIR's Michigan office.

"The Obama administration," Walid told a reporter, "needs to cut diplomatic ties [with] all of these dictators in the Muslim Arab world and to stop propping up these dictators."

But the solicitation to Gaddafi was not CAIR's only attempt at significant foreign funding from Muslim autocrats. Though its website continues to say that allegations that "CAIR receives foreign money" is "Internet Disinformation," the organization sent delegations to Saudi Arabia and the United Arab Emirates in 2006 seeking millions of dollars in donations from wealthy Gulf donors.

State Department records show Awad, Hooper and Shaw were part of those delegations. One cable, obtained via the Freedom of Information Act, said the group admitted it was in Saudi Arabia "to solicit $50 million in governmental and non-governmental contributions."

Though a U.S. ally, Saudi Arabia's human rights record under the Al Saud dynasty draws frequent criticism. The State Department's report for 2009 listed "torture and physical abuse; poor prison and detention center conditions; arbitrary arrest and incommunicado detention; denial of public trials and lack of due process in the judicial system; political prisoners; restrictions on civil liberties such as freedoms of speech (including the Internet), assembly, association, movement, and severe restrictions on religious freedom; and corruption and lack of government transparency. Violence against women, violations of the rights of children, and discrimination on the basis of gender, religion, sect, and ethnicity were common."

It's unclear how much money the trip generated. Nothing in the State Department cable indicated that CAIR officials planned to challenge Saudi human rights policies.

Likewise, they opted not to do so with Gaddafi in 2009. "We have felt for years pride and glory in your leadership and your continuing efforts for world peace, and pray and beseech God Almighty to preserve you and bless your efforts and your country," Shaw, a longtime North Carolina state senator, told Gaddafi.

"We want to assure you that Muslims in America are your brothers and supporters," Shaw said. "They share with you your interests and aspirations."

Please invistigate US Gov. too

US Government also sought Qaddafi Money in 2009 and still is. State dept embrace Qaddafi son. So does it make Us Govrenment and state Dept un -American.