The Hate That CAIR Loves to Defend 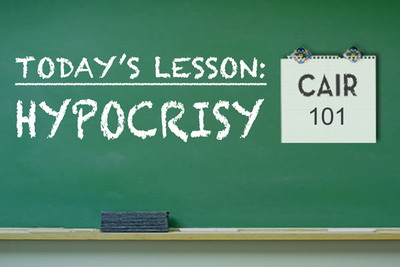 The Council on American-Islamic Relations (CAIR) again is making it clear that its understanding of antisemitism stops at the moment Israel, the birthplace of Judaism whose existence is supported by more than 90 percent of the world's Jewry, is mentioned favorably.

Last week, CAIR's Philadelphia chapter filed an EEOC complaint, alleging employment discrimination by a posh Pennsylvania private school. Natalie Abulhawa was fired from her job as an athletic trainer at the Agnes Irwin School in Bryn Mawr after a review of her social media posts, which cursed "Zionists" with a crude and sexist term while another said "Israel doesn't have a right to exist."

School officials saw the posts in Abulhawa's profile page by the group Canary Mission, which is devoted to "Exposing hatred and anti-Semitism on college campuses and beyond."

In a 2014 post included on the Canary Mission page, Abulhawa compared the Holocaust to the Palestinian plight: "One day our children will be learning about the Palestinian holocaust, just like we learned about the Jewish holocaust." She repeatedly cursed Zionists during a 2016 trip to the Middle East, including one post in which she wrote, "F*** each and every single Zionist on this planet. I hope they rot in f***ing hell. F***ing c**ts."

Abulhawa only recently started work at the Agnes Irwin School, a private, all-girls preparatory school with about 600 students and annual tuition ranging from $22,000 for kindergarten to $43,000 for high school juniors and seniors. Having a faculty member rage against all "each and every" person who supports the existence of a Jewish state – Zionists, by definition – probably isn't the image officials wanted.

"Denying the Jewish people their right to self-determination" and "Drawing comparisons of contemporary Israeli policy to that of the Nazis" are among the examples in the International Holocaust Remembrance Alliance (IHRA)'s working definition of antisemitism that is now endorsed by 37 countries and hundreds of universities, local governments and non-governmental organizations. The U.S. State Department embraced that definition in 2016.

Rather than address those uncomfortable facts or acknowledge the consequences of her hateful actions, both Abulhawa and CAIR attacked the messenger.

Canary Mission's reproduction of Abulhawa's own words amounted to "Islamophobic smears," the CAIR Philadelphia office said in a news release last Tuesday. A graphic- with the release described Abulhawa as "a proud Palestinian woman."

"She was reportedly terminated based on allegations of an anti-Palestinian, Islamophobic hate platform," the release said.

"Employment discrimiantion (sic) against Palestinian Americans and Muslim Americans is a real problem," Abulhawa said in a separate CAIR news release. "Agnes Irwin School did not think twice before bulldozing my life, without even a pretense of due process. It only took a known hate site to profile me for them to derail my career."

In this equation, saying "F*** each and every single Zionist on this planet" is not hateful. But aggregating this and similarly strident tweets into an online profile makes Canary Mission "a known hate site."

And when the shoe is on the other foot, and someone expresses anti-Muslim hatred, derailing the person's career is CAIR's go-to move. It has called for the firing of television hosts, elected officials, and even Starbucks baristas.

In 2020, it called for the resignation of an Indiana city council member who called Muslims "goat humpers" and described Islam as "a Theocratic Moon Cult" in 2015 social media posts. The council member did resign, just over two weeks after being sworn in.

This is not to excuse anyone's bigoted statements about Muslims, especially by people who answer to diverse constituencies. But a school trainer serves all students, regardless of their political or religious views. Abulhawa's slurs target those who support the existence of the Jewish state.

CAIR casts anyone who has a problem with that as an Islamophobe. Abulhawa's case presents just the latest example.

When Rutgers University law professor and Westfield Board of Education Vice President Sahar Aziz was criticized for retweeting a claim that the chant, "From the river to the sea, Palestine will be free" is not antisemitic, CAIR's New Jersey chapter jumped to her defense.

A Palestinian state from the Jordan River to the Mediterranean Sea erases the state of Israel, which, again, meets the IHRA and State Department definitions of antisemitism.

To CAIR, however, Aziz's critics "shamelessly smear her name for speaking the truth on Palestine."

San Francisco chapter Executive Director Zahra Billoo, in CAIR's eyes, also is a "smear campaign" victim. Billoo gave a speech in November in which she warned Muslims not to trust "the polite Zionists" who might want to work together. If they support Israel's right to exist, she said, "they are your enemies. There are organizations and infrastructures out there who are working to harm you."

She then proscribed groups representing the vast majority of American Jewry:

Rather than apologize, CAIR defended Billoo and condemned "this online smear campaign against" her. Billoo announced a sabbatical shortly after, returning to work just two months later.

She published an essay March 9 trying to recast herself as an ally to Jews.

"Together, we have advocated for human rights here and abroad. We have stood up against police brutality, racist immigration policies, and illegal discrimination. We have called out racism and bigotry, including the interrelated threats of Islamophobia and anti-Semitism. I will always raise my voice on these important issues, God willing."

By Billoo's own standard, this work had to be done with the few fringe Jewish groups, like Jewish Voice for Peace, whose members "unequivocally oppose Zionism." In the same essay, she doubled down on the idea that Jews who are pro-Israel cannot be allies.

Muslim students "should not work with Hillel," she repeated, in part because it has hosted Israeli soldiers. The same is true for the Anti-Defamation League and "any houses of worship that explicitly and actively support the Israeli government's human rights abuses."

But like Abulhawa, Billoo has repeatedly said she does not believe Israel has a right to exist. In a 2019 speech, she made it clear that it's Israel's existence – not its actions – that she cannot abide.

"If you want to be in community with me, my people and the Palestinians I work in solidarity with, then let's have a conversation about how Israel as it exists today is an illegitimate state ... I am not going to support its right to exist," she told the American Muslims for Palestine (AMP) conference.

Billoo has a long record of radical, hate filled speech. Yet her colleagues have consistently defended her publicly. Her recent essay was promoted as "important" by other CAIR chapter directors and the national organization itself.

Her boss, CAIR co-founder and national Executive Director Nihad Awad, shares Billoo's rejection of Israel's existence. At the 2019 AMP conference, he lumped Zionism with racism among the things CAIR "deal[s] with ... on [a] daily basis." At the November event in which Billoo warned Muslims to avoid "polite Jews," Awad referred to Tel Aviv, Israel's largest city, as "occupied" and prayed "it will be free later."

Awad and CAIR try to pretend irrefutable aspects of its history don't exist, but the organization is rooted in a Muslim Brotherhood created to help Hamas politically and financially in the United States. These connections are established in internal network documents obtained by the FBI and admitted into federal court as evidence in a Hamas financing trial. That evidence prompted the FBI in 2008 to say it "does not view CAIR as an appropriate liaison partner" unless it can determine "whether there continues to be a connection between CAIR or its executives and HAMAS."

A federal judge who reviewed the same documents denied requests from CAIR and other organizations to be removed from a list of unindicted co-conspirators in a Hamas-financing trial. U.S. District Court Judge Jorge Solis found that "the government has produced ample evidence to establish the associations of CAIR ... with Hamas."

CAIR has never acknowledged this history, and when it justifies and defends hateful speech from its own leaders, or from school staffers, it does nothing to indicate it has moved in a different direction.

Call for Muslims to blacklist most every major Jewish organization in the country? No problem.

But if you discover someone publicly wrote, "F*** each and every single Zionist on this planet" and decide that's not the image you want to project at an all-girls school? Well, CAIR thinks that's an "injustice" requiring "training mechanisms to address anti-Palestinian discrimination."

Hate shows itself in many ways. Credit CAIR for being creative in proving this point.