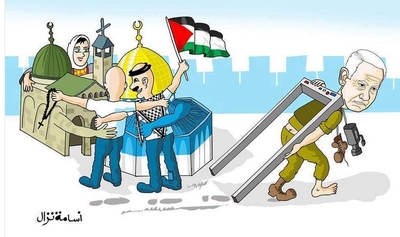 In solidarity with Palestinian factions and terrorist groups, pro-Palestinian Islamist organizations in the United States are gearing up for more anti-Israel protests today, even though the original cause for their anger has been rescinded.

Israel removed metal detectors Tuesday which were installed near an entrance to Jerusalem's Al Aqsa Mosque in response to a deadly July 14th terrorist attack. Terrorists managed to smuggle their guns into the mosque the morning of the attack. Yet Israel's acquiescence has not silenced its main detractors.

In a published set of talking points, AMP claimed the removal of metal detectors "doesn't mean that the sanctity of the Noble Sanctuary is guaranteed, nor that Israel will not try other methods in the future to alter the status quo in the Aqsa mosque."

This message builds on years of false Palestinian claims that Israel is keeping Muslims from praying at the mosque.

The metal detectors were installed only after Palestinian terrorists attacked and killed two police officers.

U.S.-based Islamist figures and groups are even challenging Israel's right to install additional surveillance cameras on the Temple Mount – the compound that houses the mosque and site of the last Jewish temple. While enhanced surveillance measures often follow terrorist attacks, any action to improve Israel's national security – no matter how minor – is met with a disproportionate anger from groups opposed to Israel's existence in any form.

AMP held an "All Out for Al Aqsa" rally last Saturday in Times Square, featuring speakers who called for Israel's destruction and radical chants from the crowd.

"You [Israel] are a hypocrisy state that will eventually be, will eventually go away. Israel will not last long," said AMP-New Jersey president and national board member Sayel Kayed.

The rally featured similarly threatening chants made in Arabic.

"With life, with blood/we sacrifice for you Al Aqsa" and "the gate of Al Aqsa is of iron [Hadid], no one can open it but a martyr [Shahid]." These chants, translated by the Investigative Project on Terrorism (IPT), show how U.S. Islamist groups cultivate an atmosphere where terrorism and violence against Israel is openly encouraged.

"There is only one solution; Intifada, revolution... "Long live the Intifada".

Other anti-Israel student groups are joining the fray. Students for Justice in Palestine (SJP) at the University of Illinois-Urbana Champaign (UIUC) posted a statement on Facebook last Friday inciting violence, the Algemeiner reported.

"Oh Allah, liberate the Al-Aqsa Mosque from the filth of the Jews. Oh Allah, destroy those who closed the Al-Aqsa Mosque...Oh Allah, count them one by one and annihilate them down to the very last one. Do not spare any of them," preached Shahin, the Middle East Media Research Institute (MEMRI) reports. 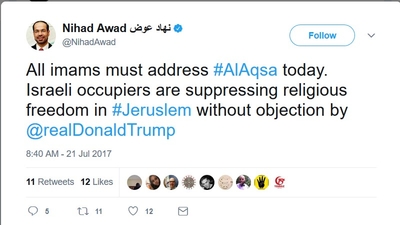 Council on American-Islamic Relations Executive Director Nihad Awad did not comment on the Shahin sermon. But he did urge all imams to talk about the issue, saying "Israeli occupiers are suppressing religious freedom in #Jerusalem."

Again, this is purportedly over metal detectors and security cameras following a deadly terrorist shooting.

CAIR's St. Louis chapter organized a march last Sunday that cast metal detectors and security cameras as a "siege" of the mosque and featured chants of "free Al-Aqsa."

CAIR's Georgia chapter is co-hosting an anti-Israel event, with the far-left Jewish Voice for Peace outside the Israeli Consulate in Atlanta.

AMP alerted its network to additional nationwide protests, including today at noon outside the Israeli embassy in Washington D.C. There is also a planned demonstration the same day in downtown Chicago at 4:30 p.m. and in New York City. On Sunday, a "March for Al Aqsa" is scheduled to take place at the Wilshire Federal Building in Los Angeles at 3:00 p.m.

U.S.-based Islamists are joining Palestinian factions from across the political spectrum who continue to call on Palestinians to protest against Israel on Friday.

For the second straight week, Hamas has called for a "day of rage" while Mahmoud Abbas' Fatah incites violence by encouraging its supporters to "intensify" confrontations with Israeli authorities throughout the West Bank and Jerusalem. Abbas went a step further on Wednesday and gave the green light for Fatah's Tanzim terrorist group to organize mass demonstrations on Friday.

On July 14, the Muslim Brotherhood led the way with calls for an "Islamic Intifada" – a violent uprising – against Israel following the day's deadly Palestinian terrorist attack.

"The Muslim Brotherhood calls upon the sons of the Islamic Umma (nation), its Ulema (Muslim religious scholars), figures and blocs for an Intifada in order to stop the (alleged Israeli) violations of holy sites...," the Brotherhood wrote on its official Arabic-language website and translated by the Investigative Project on Terrorism (IPT).

The Brotherhood admitted its main motivation for "our intended uprising" is to "pressure all Western governments, Arab regimes and international organizations to intervene to stop violations by gangs of the Zionist entity..."