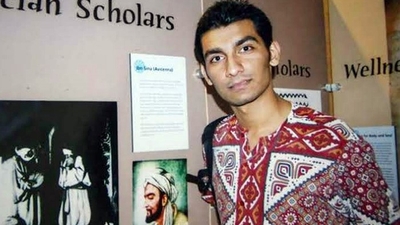 Their countries wanted them dead because of their ideas.

You've probably heard of one – Jamal Khashoggi. His 2018 murder inside a Saudi Arabian consulate in Turkey sparked international outrage and front page headlines. Khashoggi was a Washington Post columnist, and his brutal killing at the hands of Saudi government agents naturally sparked anger and a vociferous defense of free speech rights.

You may not have heard about a more recent case involving another man. Junaid Hafeez was sentenced to death in Pakistan last month after being convicted of blasphemy. Hafeez is an English literature professor. He is accused of advocating for secularism and insulting Islam and its prophet Muhammad, including on a Facebook group called "So Called Liberals of Pakistan."

While his plight has attracted media attention, the New York Times and Washington Post mostly have run wire service stories. Less than a month later, the case has all-but disappeared in Western media.

But if Khashoggi's death at the hands of a state caused outrage, Hafeez's death sentence should, too.

Unfortunately, many of the people who vowed to defend free thought and free expression after Khashoggi's murder have been absent in defending Hafeez.

"We will deliver our promise that we will remain steadfast. We will remain true to his martyrdom," former Muslim American Society (MAS) President Esam Omeish said at the 2018 MAS-Islamic Circle of North America (ICNA) convention. "We will remain true to his cause. And we will advance the goal and the purpose of the rule of law, human rights, democracy, and the ability for people all over the world – including the Arab world – to live free, to voice their word, to say, that is, what they wish to say without fear for punishment or fear for their lives."

"To me it is personal; to all of us it is personal," he said. "I would like you to know that this heroic writer is a martyr on behalf of all of us. Don't just think about Jamal. Think about the many people who are in jail today who the prosecutor asked for their death sentence because they write as they see and they try to reform their communities to be better. Jamal Khashoggi was the voice of all these people and he died for it."

Awad even suggested naming the street in front of the Saudi Arabian Embassy in Washington, D.C. "Jamal Khashoggi Way."

Both men promised to defend people's rights to speak their minds. Neither has said a word about Hafeez or that blasphemy laws can carry the death penalty as we start the year 2020.

What can explain these disparate responses? The victims' beliefs.

Khashoggi was an Islamist who opposed the Saudi Arabian government. Hafeez allegedly said the Quran "is not the Holy Book and the same is just a myth" written by Muhammad himself.

Hafeez, a Fulbright Scholar who spent two years studying at Jackson State University in Mississippi, also is accused of opening talks by saying, "In the name of Allah Almighty, who is always absent, without any leave, whose omnipotent absence is always taken for his omnipotent presence." The traditional Muslim opening statement says, "In the name of Allah, the most gracious, the most merciful."

He was charged after students affiliated with the Islamist group Jamiat-e-Talaba complained. Jamiat is the student branch of Pakistan's Jamaat-e-Islami, the leading South Asian Sunni revivalist movement.

"It is the most serious case because the Holy Prophet Muhammand (PBUH) was not only the Prophet sent for Muslims but for the whole mankind, the Qur'an is a Holy Book and source of guidance and salvation for the whole mankind," Judge Kashif Qayyum wrote in his order finding Hafeez guilty. "Accused has not only committed a heinous offence against the whole humanity but also tried to create mischief in the society."

It is not difficult to believe that Hafeez's comments might offend believing Muslims. A Twitter hashtag, #HangBlasphemerJunaidHafeez, has been posted thousands of times.

But a true commitment to religious freedom and to free thought and free speech includes defending those ideas with which you vehemently disagree. Thus far, American Islamists have failed to deliver on their promises.

A group of United Nations human rights experts issued a statement Dec. 27 calling Hafeez's conviction "a travesty of justice" with "no basis in either law or evidence."

His six years in solitary confinement before being convicted "may well amount to torture, or other cruel, inhuman or degrading treatment or punishment," the statement said. The signatories include UN Special Rapporteurs on freedom of religion or belief, on extrajudicial, summary or arbitrary executions, and on torture and other cruel punishment.

Pakistan is among 13 countries with blasphemy laws carrying a death sentence. Its law, known as Section 295-C, was enacted in 1986. It often has been abused by people in personal disputes or to target religious minorities. An estimated 65 people accused of blasphemy died in mob violence and other extrajudicial killing.

In 2011, Punjab Governor Salman Taseer was gunned down by one of his own bodyguards. Taseer criticized the blasphemy law and defended Asia Bibi, a Christian woman accused of blasphemy. Bibi spent eight years on death row before her conviction was overturned earlier this year and she was able to leave Pakistan for Canada. Taseer's bodyguard-turned-assassin, Mumtaz Qadri, now is hailed as a hero in Pakistan, with his grave turned into a shrine.

History repeated itself in Hafeez's case. His original attorney, Rashid Rehman, was gunned down after being subjected to death threats during a court proceeding. According to media reports, the threats even came from prosecutors, who told him, "You will not come to court next time because you will not exist any more (sic)." He complained to the court but no action was taken.

This oppression against free thinkers is not isolated to Pakistan. Saudi Arabia continues to hold writer Raif Badawi, who endured 50 lashes, for "criticising Islam through electronic means." Malaysian atheists have been targeted for arrest and "re-education." In Bangladesh, secular blogger Avijit Roy – an American citizen – was among 39 people hacked to death by radical Islamists who were offended by their views.

But Pakistan is more than 95 percent Muslim and led by an Islamist-friendly government. While Saudi Arabian money has helped underwrite much of the world's conservative Sunni education, it does not enjoy support from Muslim Brotherhood-aligned Western organizations like MAS and CAIR.

Each death, each blasphemy allegation, is a human and civil rights violation. We can't say that things would change if American Islamists applied the same outrage they had for Khashoggi's murder to Hafeez's case, or Badawi's. But the blatant Islamist hypocrisy on human rights reveals CAIR and other Islamist groups are not "civil rights" groups as they are described in the New York Times and other mainstream media, but are front groups for radical Islam.