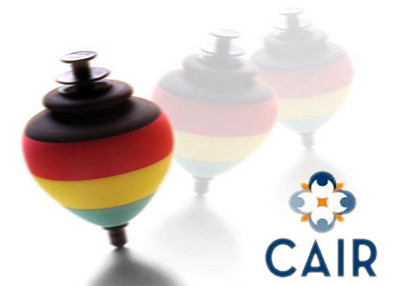 Officials with the Council on American-Islamic Relations (CAIR) are painting a deceptively rosy picture of the organization's relationship with the FBI. The spin follows the group's decision last week to remove an anti-FBI graphic posted on its San Francisco chapter's website.

The graphic depicts a sinister-looking FBI agent walking down a street as doors slam shut. "Build a Wall of Resistance," it reads. "Don't Talk to the FBI." CAIR issued a clarification statement calling it "inconsistent with CAIR's policy of constitutionally-informed cooperation with law enforcement agencies." The group had included the graphic as part of a "Know Your Rights" event it co-sponsored in response to several FBI raids conducted during September 2010.

Corey Saylor, CAIR's national legislative director, said on Fox News' O'Reilly Factor, that he is "troubled" by the media's critical reaction. "I can speak of a number of different occasions of CAIR's consistent policy of cooperating with law enforcement," he said.

O'Reilly didn't press Saylor very hard. There was no mention of CAIR's 2009 announcement that it had joined a coalition threatening to cut ties with the FBI. Saylor also wasn't asked about his organization's founding executives' ties to a U.S. Hamas support network, which resulted in the FBI suspending formal relations with CAIR.

CAIR spokesman Ibrahim Hooper touted CAIR's "consistent policy of positive and constructive engagement with law enforcement officials." He promised that nothing "negative" would come from the lips of CAIR representatives at the event advertised.

While he acknowledged it should not have been posted, Hooper "refused to renounce the artwork," instead blaming "a cottage industry of Muslim bashers" for the poster controversy.

Even if their cited reasons for removing the poster were genuine, generalizations by Saylor and Hooper about a healthy relationship between CAIR and law enforcement are less than accurate.

CAIR has a long track record of criticizing terrorism financing and support cases brought by the US government. Its officials called the conviction of the Holy Land Foundation for funneling money to Hamas "based on fear-mongering," despite the evidence. The HLF trial publicized links between CAIR founders Nihad Awad and Omar Ahmad and the Palestine Committee, an umbrella organization of U.S. Hamas support groups. CAIR was listed itself as a component of the committee in internal documents. The government named CAIR an unindicted co-conspirator in the trial. The presiding judge later said there was "ample evidence" tying CAIR to Hamas.

Likewise, the group's Maryland chapter criticized 2004 convictions in the Virginia "paintball jihad" case, in which several men were convicted of charges related to supporting Pakistani terrorist group Lashkar-e-Tayyiba, by alleging "selective enforcement of laws and disparate sentencing treatments when the accused happens to be a Muslim or Arab." Similarly, CAIR Dallas-Fort Worth spokesmen called the 2004 conviction of the Elashi brothers for illegally shipping technology to countries listed as state sponsors of terrorism a "witch-hunt against the Muslim community by way of selective prosecution."

The underlying premise driving CAIR's "Know Your Rights," campaign is that the FBI has bad intentions and Muslims should not cooperate unless they have no other choice:

The Minneapolis Somali community even protested CAIR's "Know Your Rights" efforts in response to FBI investigations into missing Somali-American youths. Family members of a Minnesota boy believed to have been killed in Somalia after being recruited by the terrorist group al-Shabaab handed out flyers at a CAIR protest rally. The flyers countered that CAIR's actions "have led many in the Somali American community to believe that they are intentionally shielding from prosecution members of a network which has been providing material support to a terrorist group," al-Shabaab, which has been involved in the "trafficking of American youths."

Often, CAIR officials even blame the FBI for creating terrorists and radicals:

Just like the message sent by the image of a lurking, unidentifiable FBI agent as portrayed in the now-removed CAIR website poster, CAIR coaches its members to believe that the FBI is out to "get you," especially if you're a Muslim:

On the recent O'Reilly Factor, Saylor cited examples to back up his claim that CAIR is a friend of the FBI's.

In one of Saylor's cited cases, the case of Ahmadullah Niazi, brother-in-law of Osama bin Laden's security coordinator, CAIR focused on its disapproval of the FBI informant to distract from the merits of the investigation. According to the U.S. government, Niazi lied on his naturalization application and to U.S. officials, including failing to disclose his associations with terrorist organizations, other names he had been known as in the past and a trip abroad to Pakistan. The Muslim community reported the FBI informant to the FBI.

Yet the informant wasn't the only source of information in the case. FBI Agent Thomas Ropel III testified that Niazi said it was a duty to perform "jihad" and discussed with Ropel sending the informant to training camps in the Middle East. Also, according to Ropel's testimony, Niazi called Osama bin Laden "an angel." CAIR's Hussam Ayloush said that the informant in the Niazi case was hired by the FBI to "instigate acts of violence to ruin the reputation of the Muslim community."

In a second case, in which CAIR connected families of the Zamzam Five, five missing Virginia youth, with the FBI in November 2009, CAIR officials quickly began toning down their description of the facts of the case. At first, Executive Director Nihad Awad described a video tape left by the boys as a "farewell" that made him "uncomfortable." Later, Awad argued that, should they be sent back to the U.S., the government should not prosecute the five young men who disappeared from the suburban Washington, D.C. neighborhood, only to turn up in Pakistan hoping to join the jihad against American troops.

The government has to show some appreciation for the actions of the parents and the community," Awad said. "That will encourage other families to come forward."

A Pakistani court rendered the issue moot in June 2010, when Ramy Zamzam, Umar Farooq, Ahmed Abdullah, Waqar ul Hassan and Hassan Yasir, were convicted of conspiring to carry out terrorist attacks, and sentenced to 10 years in prison.

CAIR is our enemy

I can only hope that when Peter King holds his homegrown Jihad hearings, he condemns CAIR and other Islamic organizations like it. King also needs to note the fact that Keith Ellison is well connected to CAIR and to the muslim brotherhood. Its one reason why CAIR and Ellison are trying to downplay these upcoming hearings. Hopefully Peter King will come down hard on CAIR as a supporter of hamas.

Thanks for the good work you guys here at IPT in bringing out information that few other sites provide. Certainly the liberal media will never give us the truth about the evils of Islam. They are only too willing to submit to our enemy.