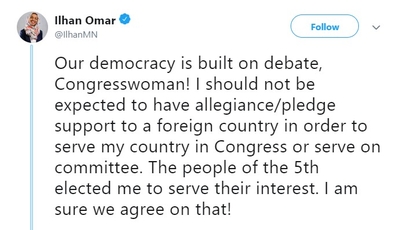 Another day and, it seems, another chapter in the ongoing saga of U.S. Rep. Ilhan Omar's anti-Semitism.

Omar, a freshman Democrat from Minnesota, in 2012 accused Israel of "hypnotizing the world" and prayed that "Allah awaken the people and help them see [its] evil doings." After apologizing and pledging to learn more about "the painful history of anti-Semitic tropes," Omar last month blamed Jewish money for driving criticism she and fellow freshman U.S. Rep. Rashida Tlaib, receive for their "criticisms of Israel."

Then during an appearance last week, she said her critics represent a "political influence in this country that says it is okay to push for allegiance to a foreign country" – meaning Israel.

Jews have the power to hypnotize the world. Their money controls American policy, and their allegiance is "to a foreign country."

For those keeping score at home, Omar has checked at least two of the boxes in the U.S. State Department's definition of anti-Semitism. That definition does not include criticism of Israel's government or policies. It does include uttering "stereotypical allegations about Jews as such or the power of Jews as a collective—especially but not exclusively, the myth about a world Jewish conspiracy or of Jews controlling the media, economy, government or other societal institutions." [Emphasis added]

"Accusing Jewish citizens of being more loyal to Israel, or to the alleged priorities of Jews worldwide, than to the interest of their own nations," also is anti-Semitic by definition.

Fellow Democrat Eliot Engel, chairman of the House Foreign Relations Committee on which Omar serves, called her comments insinuating a dual loyalty among Israel's supporters "a vile anti-Semitic slur. This episode is especially disappointing following so closely on another instance of Ms. Omar seeming to invoke an anti-Semitic stereotype. Her comments were outrageous and deeply hurtful, and I ask that she retract them, apologize, and commit to making her case on policy issues without resorting to attacks that have no place in the Foreign Affairs Committee or the House of Representatives."

Omar doubled down in response to Lowey's comments Sunday, saying, "I should not be expected to have allegiance/pledge support to a foreign country in order to serve my country in Congress or serve on committee."

"I am told everyday (sic) that I am anti-American if I am not pro-Israel," she added. "I find that to be problematic and I am not alone. I just happen to be willing to speak up on it and open myself to attacks."

That is not what is happening. Omar has made a series of generalizations, all of which echo historic anti-Semitic slurs about Jews, money and influence. "Hypnotized the world" is not a policy criticism. Dual loyalty insinuations are not ways to question the U.S.-Israel relationship.

That doesn't excuse any bigotry or hatred aimed at Omar, one of two Muslim women in Congress. A poster outside the West Virginia House of Delegates Friday included Omar's picture beneath a plane crashing into the World Trade Center on Sept 11, 2001. Her election, the poster said, is proof we've forgotten that attack on America. It was GOP Day at the state capitol, but the party chairwomen said it was done by an exhibitor and not approved by the party.

House Democrats plan to vote on a resolution, perhaps Wednesday, condemning anti-Semitism, the Washington Post reports. While it does not name Omar, the resolution refers to "dangerous anti-Semitic myths ... including that Jews control the banks, media, and the United States Government or seek world domination and that Jews are obsessed with money." It also details the historic harm created by dual loyalty smears. Politico describes it as "an unprecedented public rebuke of Omar," and "an extraordinary public admonishment from House leaders, particularly against a member of their own party."

Still, Omar has plenty of defenders who insist she is unjustly being smeared simply for criticizing Israel.

For some, that's because they've pushed the dual loyalty canard themselves, often in response to U.S. policies toward Israel. And they don't limit the accusation just to Jewish people.

Linda Sarsour, who has her own lengthy record of anti-Semitism, urged followers last November to defend Omar from not only "the right-wing but some folks who masquerade as progressives but always choose their allegiance to Israel over their commitment to democracy and free speech."

Members of Congress who supported legislation which would allow the government not to contract with businesses boycotting Israel "forgot what country they represent," Rashida Tlaib, a Michigan Democrat, said in January.

These are not comments they make when policies favor other U.S. allies.

It was a key talking point in late 2017, as reports made it clear that the Trump administration would recognize Jerusalem as Israel's capital and, after years of promises from past presidents, would move its embassy there. Debating the move's wisdom was fair game, including whether that decision should wait for negotiations between Israelis and Palestinians.

But that's not what pro-Palestinian voices argued. Instead, they cast Washington as somehow beholden to, or controlled by the Israeli government.

"We expect that President Trump puts Americans first, form his policy decisions based upon our interests and not the interests of a government of a foreign country – in this case the government of Israel," said Osama Abuirshaid, a leader of the group American Muslims for Palestine (AMP), which has ties to an old Hamas-support network in the United States and which supports an economic, political and academic boycott of Israel. "He always bragged about putting America first. Now he's putting Israel first."

Abuirshaid spoke at a news conference at the National Press Club Dec. 5, 2017.

Omar and her supporters continue to insist that they are being unfairly maligned because that's what happens to people who speak out against Israel. But blaming Jewish money and accusing someone of dual loyalty is not criticism of a policy or of the politicians who support it.

Somehow, it seems difficult to believe that Omar and her supporters don't realize that.