I've spent a lot of time in recent months chronicling the unabashed hatred spewed by Zahra Billoo, one of the Council on American-Islamic Relations (CAIR)'s highest profile chapter directors.

That's because, when it comes to antisemitism, Billoo is the gift that keeps on giving. And because it's abundantly clear that her bosses not only are perfectly comfortable with her views, they have made it clear that they have her back.

She returned from a "sabbatical" in late February, just three months after giving a speech casting the vast majority of Jews as "enemies" because they support Israel. She warned her audience to "pay attention to the polite Zionists" who seek to work together on other issues. They are behind "a well-funded conspiracy" to push "Islamophobia ... to marginalize us, to imprison us, to deport us, to silence us."

Jews. A well-funded conspiracy. To imprison us.

That kind of rhetoric might sound at home among tiki-torch carrying mobs in Charlottesville, but not from the leader of a "civil rights" group's San Francisco chapter. Yet, CAIR never asked Billoo to apologize for her comments. Instead, it argued that she was the victim of an "online smear campaign."

It should be no surprise, therefore, to hear Billoo repeat her blanket dismissal of pro-Israel Jews Saturday during a program that was advertised as focusing on "Islamophobia" in France and India.

Billoo and her boss, CAIR national Executive Director Nihad Awad, don't believe Israel should exist. At least Billoo comes right out and says it. Awad plays it coy, dropping a quick assertion that Tel Aviv, Israel's largest city and the place where its independence was declared, is "occupied."

"Holding Jews collectively responsible for actions of the state of Israel" and "Denying the Jewish people their right to self-determination" and "Drawing comparisons of contemporary Israeli policy to that of the Nazis" are among the examples in the International Holocaust Remembrance Alliance (IHRA)'s working definition of antisemitism.

For Billoo and CAIR, it's just another day at the office.

But it is this kind of hate that prompted the Simon Wiesenthal Center to add CAIR to its list of the world's top anti-Semites.

This is not some new development. The Investigative Project on Terrorism has amassed hundreds of examples of CAIR officials pushing antisemitic conspiracy theories and saying things like Jews are cursed and do not deserve Allah's mercy, and calling them the "enemies of God and humanity!"

Awad called Israel "the biggest threat to world peace and security." He went on record in 1994 with his support for Hamas over the PLO. Since then, internal documents and eyewitnesses place him and his organization as a cog in a Muslim Brotherhood-run Hamas-support network in America. CAIR is an outgrowth of that network, and prosecutors wrote that it was part of "an ongoing and ultimately unlawful conspiracy to support a designated terrorist organization [Hamas], a conspiracy from which CAIR never withdrew."

Most CAIR officials won't condemn Hamas specifically, and sometimes react angrily to being asked. They point instead to a blanket statement that "condemns terrorism whenever it happens, wherever it happens, whoever commits it."

Awad was quick to condemn Sunday's shooting death of a Palestinian woman who moved aggressively toward Israeli soldiers. She was unarmed and Awad wrote that the soldiers "executed" her.

He did not mention video that shows her charging the soldiers, and shows that the shot was aimed toward her lower body, indicating an intent not to kill. She reportedly died of blood loss. He also leaves out the context that Israel has endured a wave of terrorist attacks in recent weeks, including by women, that has left 14 people dead.

Even U.S. Rep. Ilhan Omar condemned the "horrific, appalling" violence. Neither CAIR, nor its top leaders, have done the same.

The death toll includes five random civilians who happened to be out in Bnei Brak when a gunman opened fire. One victim was Amir Khoury, an Israeli-Arab policeman who tried to stop the killer and is credited with preventing greater carnage. Two were Ukrainian nationals. A similar attack days later in the heart of Tel Aviv claimed three lives.

If "resistance against occupation" is justified, as CAIR officials have said, and you believe Tel Aviv is occupied, then it's not a stretch to assume CAIR's silence about the recent wave of terrorist attacks means it believes the killings somehow are justified.

Billoo has bigger fish to fry. She retweeted a picture of Muslims who are in the Israel Defense Forces (IDF) as they enjoyed a meal breaking their Ramadan fast. Some might be surprised to see Muslims proudly serving in the IDF and pleased to see their religious traditions respected.

The picture she retweeted included a comment that the men were headed straight to "hellfire." 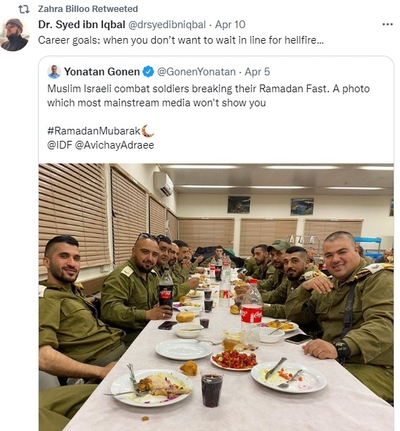 Observant Muslims are no better than "polite Zionists" to Billoo if they believe Israel should exist and be defended.

And CAIR calls us a hate group.