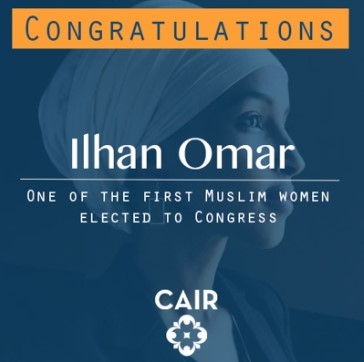 CAIR said it "welcome[d] changes to the resolution" that never directly mentioned Omar or her very specific examples of anti-Semitism, but offered a condemnation of bigotry in general. To the self-described "Muslim civil rights and advocacy organization," Thursday's anti-hate proclamation represents a political triumph earned from years of demonizing Israel while promoting an overblown Islamophobia crisis.

CAIR officials took a victory lap following the resolution's passage, absolving Omar of any wrongdoing by conflating her anti-Semitic statements with "legitimate criticism" of U.S. support for Israel.

"All Americans should support statements denouncing anti-Semitism, Islamophobia and other forms of bigotry," CAIR's press release reads. "Unfortunately, this resolution was introduced to silence legitimate criticism of domestic support for the discriminatory and segregationist policies of a foreign government that receives billions of American taxpayer dollars."

Despite presenting itself as an innocuous Muslim civil rights organization, records show that CAIR was created as part of a Hamas-support network in America. Hamas is a Muslim Brotherhood legacy group which openly seeks Israel's destruction. The FBI severed formal relations with CAIR in 2008, saying the group was not "an appropriate liaison partner" until it could determine "whether there continues to be a connection between CAIR or its executives and HAMAS."

The policy remains in effect. The United Arab Emirates, meanwhile, designated CAIR as a terrorist group in 2014.

U.S. Rep. Rashida Tlaib, D-Mich., who was accused of anti-Semitism in January for saying that senators opposed to the anti-Israel boycott movement "forget what country they represent," joined Omar in celebrating the revised resolution. "Today is historic on many fronts. It's the first time we have voted on a resolution condemning anti-Muslim bigotry in our nation's history," they wrote.

Likewise, the day before the resolution passed, CAIR darling Linda Sarsour complained that Congress had never defended Muslim Americans from harassment. "Democratic leadership were never swift to condemn ... or put out resolutions condemning islamophobia (sic) and/or standing in solidarity with Muslims on the record in Congress," Sarsour wrote.

The Senate adopted a similar measure that same year. and in 2015 the House introduced H.R. 569 "Condemning violence, bigotry, and hateful rhetoric towards Muslims in the United States," after groups like CAIR warned of an impending anti-Muslim backlash following the jihadist-inspired San Bernardino massacre. Apart from a few non-violent incidents, San Bernardino residents say their worst fears about a backlash in their own community never materialized.

The FBI's 2017 hate crime statistics demonstrate that, like previous years, American Jews are the most common victims of hate crimes. Anti-Semitic attacks represent 58.1 percent of all anti-religious hate crimes – more than three times the number of anti-Muslim incidents. And yet, House lawmakers couldn't find the courage last week to take a stand against anti-Semitism.

In the past month, Omar has attracted a hornets' nest of controversy by spouting classic anti-Semitic tropes in successive, widely-condemned incidents. First, the Minnesota Democrat tweeted, "It's all about the Benjamins baby," using an age old crude anti-Semitic charge to suggest that pro-Israel lobbyists pay to silence criticism of the Israeli government. But just after issuing what seemed to be a deflective apology, Omar told a progressive town hall audience that Israel's supporters are guilty of dual loyalty, i.e. guilty of "allegiance to a foreign country."

Omar's comments drew bipartisan condemnation from legislators, and even upset some of her allies from the Muslim American left. Hussein Ibish, a Progressive Muslim Union co-founder and Bloomberg columnist, described Omar's remarks as "a disaster that reinforces divisive stereotypes about supposed Muslim hostility to Jews." New York Magazine columnist Jonathan Chait accused anti-Semites like Omar of "smuggling their biases into criticisms of Israel."

Reminiscent of 2015, Islamist lobbyists won the day. Teaming up with a consortium of far-left activists and Muslim advocacy groups, 19 CAIR officials signed on to a letter asking House Speaker Nancy Pelosi to "pass a resolution that equally condemns antisemitism and Islamophobia." Signatories included CAIR-Los Angeles Executive Director Hussam Ayloush, who wrote that the Middle East would be "better off" if Israel were "terminated," and CAIR-San Francisco director Zahra Billoo, who maintains that Israel does not have "a right to exist."

Despite the hateful prejudice expressed by these petitioners, Pelosi and the House caved.

Congress ultimately condemned anti-Semitism — but not without acknowledging anti-Muslim bigotry and white supremacism. Omar was never mentioned. Pelosi engaged in her own bigotry, the soft form exhibited by low expectations, by arguing that Omar, an elected member of Congress on the House Foreign Relations Committee, "did not understand the words she was saying."

It's a mind-set that is deeply rooted among many Islamists. CAIR co-founder and Executive Director Nihad Awad advanced a common anti-Semitic theme when he applied otherworldly characteristics to Jews as a world power. "[T]he Jews through their Zionist machinery have power over all the agencies and organs of the United States government," he wrote in an anti-Semitic pamphlet issued prior to founding CAIR. 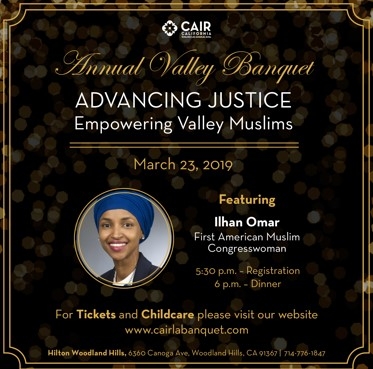 CAIR, an Islamist nonprofit which despises Israel and revels in Islamophobia, represents Omar's base. She has helped CAIR raise money in the past and is scheduled to appear at a CAIR-Los Angeles fundraiser later this month. She will share the podium with Hassan Shibly, the chief executive of CAIR's Florida chapter and an outspoken anti-Semite in his own right who has refused to condemn Hamas and vilified "Israel [and] its supporters" as the "enemies of God and humanity." It comes as no surprise, then, that Shibly would whitewash Omar's blatant anti-Semitism, cheering the congresswoman last week for "expanding the overdue conversation on why [the] US has enabled Israel to commit massive crimes against Palestinian civilians."

The prevailing anti-Semitic attitudes embraced by far-left members of Congress did not emerge overnight. This hatred was born out of a lasting courtship between some members of the Congressional Black Caucus (CBC) and CAIR, which regularly exchange dignitaries to attend each other's conferences and fundraisers.

The caucus maintains ties to Nation of Islam leader Louis Farrakhan, a vociferous anti-Semite who has referred to Jews as "termites" and to Adolf Hitler as a "very great man." Back in 2005, 20 CBC lawmakers were photographed getting cozy with the black nationalist, and caucus affiliates like Rep. Danny Davis have openly praised Farrakhan's "visionary leadership."

"When members of the CBC shielded Omar from questions following her anti-Semitic comments, who could be remotely surprised?" asked Erielle Davidson, senior contributor at the Federalist. "The irony of the feigned shock from various corners is that Omar is not an aberration or an exception to CBC members—she is the rule."

With exceptional political reach on Capitol Hill, CAIR has persuaded Congress to minimize or excuse examples of anti-Semitism while enunciating anti-Muslim bias. Through an increasingly critical alliance with a far-left Democratic caucus, the Islamist front group has popularized its odious brand of hatred and found willing adherents among influential members of Congress.

Benjamin Baird is a writer for Islamist Watch, a project of the Middle East Forum. He is a graduate of Middle Eastern studies from the American Military University, a member of the Association for the Study of the Middle East and Africa, and a U.S. Army infantry veteran of Iraq and Afghanistan.