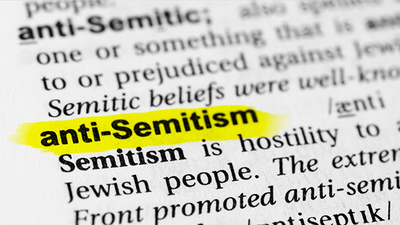 I sure hope not. Weinstein is on trial in Los Angeles for alleged rapes after being convicted in 2020 of similar charges in New York. One sexual predator condemning another doesn't really mean much.

I had a similar reaction Tuesday, when the Council on American-Islamic Relations (CAIR) condemned blatantly antisemitic comments by rap star Kanye West.

West promised to "go death con 3 on Jewish people," in a social media post earlier this month. He followed that up by making statements about Jewish control of the media and other antisemitic conspiracies

"Kanye West's antisemitic statements have contributed to the already alarming rise in antisemitism that we are seeing in our society and must not be tolerated," CAIR's Los Angeles chapter director Hussam Ayloush said in the statement.

But CAIR manages to tolerate it when the antisemitism involves Israel and Jews who support it.

In June, a "mapping project" by a group supporting the Boycott, Divestment and Sanctions (BDS) movement against Israel was roundly condemned as dangerous antisemitism that could put people at risk. The map showed the exact locations for dozens of Jewish organizations and others who support Israel's existence.

It was a case of "outright antisemitic bigotry, conspiracy theories and implicit invitations to violence," wrote Washington Post columnist Dana Milbank. But when he called CAIR for comment, he was told it "is not an issue we're dealing with at this time."

"Why not?" Milbank wondered.

I explained why in detail. There's something in CAIR's DNA – it was born out of a Muslim Brotherhood-controlled Hamas-support network in the United States – that puts its opposition to Israel's existence above everything else. Nihad Awad, CAIR's co-founder and the only executive director in its 28-year history, was listed along with two other founding officials, in a roster of network members.

Last month, CAIR defended U.S. Rep. Rashida Tlaib after she told an anti-Israel group that people "cannot claim to hold progressive values, yet back Israel's apartheid government." The comment drew immediate rebuke from many of Tlaib's fellow Democrats. And it came after Tlaib said she wants a "one-state solution" to the Palestinian-Israeli conflict, which essentially results in the elimination of the world's only Jewish state.

Her critics were the bigots, CAIR said in a statement: "The claim that she said something anti-Semitic is a blatant and dangerous lie." The response "points to the need for Democrats in Congress to address the issue of Islamophobia within their own ranks."

And CAIR stood by San Francisco chapter director Zahra Billoo after she similarly warned an audience last year that "polite Zionists" were "enemies" behind "a well-funded conspiracy" to push "Islamophobia ... to marginalize us, to imprison us, to deport us, to silence us." She did nothing wrong, CAIR said. Again, it accused her critics of being the real haters.

It said that Billoo was the target of an "online smear campaign" by "Islamophobic, anti-Palestinian groups that use false allegations of anti-Semitism in a cynical attempt to silence American Muslims who speak up for Palestinian human rights." Saying she "discouraged Muslims from working with Jewish groups at-large" was a lie.

But here is what she said on video:

In April, Billoo made it clear that she was, in fact, discouraging Muslims from working with Jewish groups at large.

With apologies to Jeff Foxworthy, if you see the overwhelming majority of Jewish people as enemies not to be trusted, you might be an antisemite.

But CAIR doesn't care. Billoo is still on the job and, as far as the public knows, faced no consequences for calling Jews "enemies" trying to harm Muslims.

"Billoo," the Simon Wiesenthal Center said in January, "is but one of venomous professional Israel and Jew-haters who use non-existent dots to create phony links between Israel and US social crises. They always wrap their bigotry in the mantle of social justice. The goal is demonizing the Jewish state and silencing Israel's supporters on campus and Capitol Hill."

Since the Wiesenthal Center placed it on a list of the world's worst anti-Semites, CAIR has intensified a campaign to persuade people it has no problems with Jews.

It has issued at least 11 statements since Sept. 21 condemning antisemitic acts throughout the country. That includes West's rants, but also the destruction of a mezuzah snatched off an Indiana family's front door, a swastika scratched into a yard sign for congressional candidate Max Rose in New York, and the distribution of antisemitic flyers in southern California, Arizona, Wyoming, South Carolina, Virginia, Michigan, and North Dakota.

"Those targeting the Jewish community with antisemitic hate must be repudiated by all Americans," CAIR national spokesman Ibrahim Hooper said in the Wyoming statement. "The mainstreaming of bigotry in any form must never be tolerated or excused."

As we have shown, CAIR both "tolerates and excuses" antisemitism within its own ranks.

During a 2012 sermon, CAIR Michigan director Dawud Walid asked his audience, "Who are those who incurred the wrath of Allah?" Speaking in Arabic, he answered, "They are the Jews, they are the Jews." Seven years later, Walid said that Jews "were specifically cursed, meaning Allah's mercy was withheld from them because they saw the injustice, they saw the anti-social behavior, they saw the lewdness, and they just were complacent. They were cool with it. They didn't speak out against it. They allowed it to become part of the status quo."

Walid, like Billoo, still is a prominent CAIR official.

Meanwhile, we could find no CAIR news release in the wake of attacks by Palestinian advocates in the United States last year targeting random Jews. The attacks came during the May 2021 fighting between Israel and Hamas in Gaza.

In Los Angeles, diners sitting outside a sushi restaurant were beaten by men from a caravan of Palestinian supporters. In New York, at least five men attacked a Jewish man wearing a yarmulke near Times Square. They "knocked him down, punched, kicked and pepper sprayed him and hit him with crutches, while making anti-Semitic statements," the New York Police Department said.

When news outlets asked CAIR for comment, it said, "As a civil rights and advocacy organization, we support everyone's right to free speech, the right to assemble and rally in support of their respective political views.

"However, despite heightened tensions in Palestine and Israel, it is never acceptable for that conflict to spill over into our streets and cities. Violence and intimidation should be condemned, investigated, and if warranted, prosecuted."

Similarly, Hooper told reporters, "While everyone has the First Amendment right to speak out on any issue they want, any act of hate speech, violence or intimidation, regardless of which side you are on, is inappropriate."

Jews were beaten because they were Jews. But CAIR could not bring itself to acknowledge that the violence was motivated by antisemitism because it involved Palestinian supporters.

It is clear that CAIR is trying to fool the public. It is quick to issue releases condemning antisemitism by anonymous individuals who dump flyers in a neighborhood, or who get caught defacing a synagogue. But when it comes to conspiracy theories about Jews driving "a well-funded conspiracy ... to marginalize us, to imprison us, to deport us, to silence us," or condemning violence by Palestinian advocates against random Jews, the group is uncharacteristically reserved.

Pointing this out, they'll likely argue, is Islamophobic.