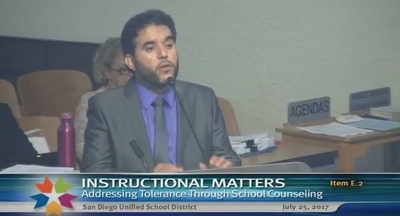 CAIR helped the San Diego Unified School District develop an anti-bullying program. But five local families and two community groups sued last spring, claiming the program elevated Muslim students above others. The school board agreed to stop working with CAIR in July, acknowledging that CAIR is a religious group and the partnership may cross the line on church-state separation.

The ligation continues, however, and the school board asked the court last month to strike references to CAIR's anti-Israel positions and its connections to Hamas from the case, saying they were irrelevant.

The Anti-Defamation League, which took over the anti-bullying program after the board broke with CAIR last summer, has cited CAIR's "long record of anti-Israel activity," a response filed Friday by the Freedom of Conscience Defense Fund (FCDF) said. CAIR and its founders were part of a Hamas-support network in the U.S. during the 1990s, records seized by the FBI show.

The school district knew about CAIR's history before it was sued and had opportunities to disavow the organization, the FCDF response said.

"Contrary to what Defendants would have this Court believe, there is ample evidence demonstrating CAIR's harmful influence within the District, including its manipulation of instructional materials to advance their sectarian agenda," the FCDF wrote.

None of the cases the school district cited to justify removing the references to Israel or extremists "addresses a situation like this one, where a religious organization with an internationally reprehensible reputation functions as the ministerial arm of a government institution," the FCDF said.

Proselytizing is part of CAIR's religious mission, and it has chosen to use public schools as a forum for spreading its religious message under the cover of an anti-bullying program, the FCDF argued.