The Loud Message from CAIR's Relative Silence on the Rushdie Attack

This story has been updated to add comments made by CAIR.

The news was so disturbing it could not go without a comment from the Council on American-Islamic Relations (CAIR). Auburn University's men's basketball team was about to embark on a 10-day trip to Israel.

They'd play some games and hold clinics with Israeli and Palestinian children. Coach Bruce Pearl emphasized the historical places the team would visit, including "where Jesus was born." Players who wanted to would be baptized in the Jordan River just as Jesus was.

CAIR issued a statement saying the trip was a "propaganda junket ... clearly designed to normalize Israeli apartheid and racial segregation" and should be canceled.

CAIR chose to make a statement about the basketball team. But when a world-renowned author is attacked on stage by an apparent radical Shia Muslim, 33 years after the Shiite Iranian theocracy issued a fatwa calling for his murder, CAIR has had little to say.

Thankfully, author Salman Rushdie is "on the road to recovery," his agent says, although he may suffer permanent injury. Rushdie has been subject to a fatwa calling for his death since 1989 in response to his novel, The Satanic Verses, which Ayatollah Ruhollah Khomeini called an insult against Islam.

Part of its mission is "to promote a positive image of Islam and Muslims in America," CAIR's website says. That work apparently does not include speaking out against violence specifically inspired, and sometimes planned, by the Islamic Republic of Iran. It couldn't even go so far as to wish Rushdie a full and speedy recovery.

When asked for comment by a reporter Friday, CAIR spokesman Ibrahim Hooper did not even mention Rushdie's name. Instead, he offered a generic statement, which he also posted on social media: "American Muslims, like all Americans, condemn any violence targeting anyone in our society," said @CAIRNational's Ibrahim Hooper. "That goes without saying. We will have to monitor the situation and see what facts come to light." 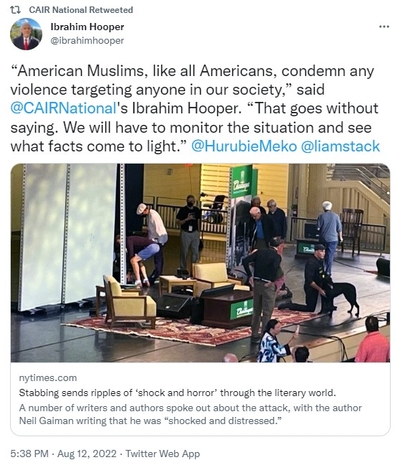 Hooper's statement is a non-condemnation condemnation. You could be pistol-whipped by a mugger, or you could be targeted for assassination by an Islamist dictatorship. He draws no distinction.

The organization put out a statement saying "No one has the right to physically attack a public speaker over an objection to their speech" and that it expects the crime to be prosecuted.

It's a stark contrast to CAIR's full-court press after Washington Post columnist Jamal Khashoggi was murdered by Saudi Arabian agents inside a Saudi consulate in Turkey.

Khashoggi and CAIR Executive Director Nihad Awad were friends and were working on a new political venture when Khashoggi was murdered.

But the killing had a shock value all of its own. A theocratic state hunted down and violently silenced a critic's voice on foreign soil.

CAIR loudly and repeatedly condemned the murder and Saudi Arabia. It issued dozens of statements, news releases and social media posts. It hosted a memorial service broadcast on CSPAN. Khashoggi had asylum in the United States, Awad said at a news conference, "and he deserves American protection." CAIR pushed for sanctions against Saudi Crown Prince Mohamed bin Salman.

"This heroic writer," Awad said at CAIR's 2018 national banquet, "is a martyr on behalf of all of us ... you and I should be his voice and to continue to his legacy speaking truth to power, writing, analyzing and inspiring people."

CAIR also pushed local officials to rename the street in front of the Saudi Arabian embassy in Khashoggi's name, and then Awad spoke at the resulting renaming ceremony in June. 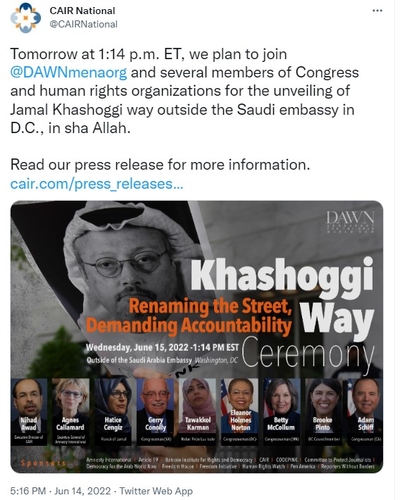 CAIR's uncharacteristic reticence about the near-fatal attack on Rushdie is consistent with previous blasphemy-related violence, and about Iran's repeated attempts to hunt down and murder its critics. It said nothing about Pakistan issuing a death sentence for blasphemy in 2019 to an English literature professor who allegedly advocated for secularism, thereby insulting Islam and its prophet Muhammad.

We could not find any CAIR statements on two separate Iranian plots targeting American citizens and dissident Masih Alinejad.

New York police arrested a man last month after he was seen outside Alinejad's Brooklyn home armed with an assault rifle. He is suspected of being an Iranian agent. A year earlier, federal prosecutors charged four Iranian intelligence agents with plotting to kidnap Alinejad and bring her back to Iran. In CAIR's eyes, this doesn't rise to the level of an issue worth speaking out about.

In 2018, CAIR tried to smear Muslim reformer Zuhdi Jasser after Jasser, on "international blasphemy day," posted an image from the cartoon "Jesus and Mo," which uses images of Jesus and Muhammad to mock religious dogma. CAIR's post was labeled "Islamophobia Watch," and called Jasser, a devout Muslim, as an "Islamophobia Enabler."

Now, a 24-year-old man who reportedly had direct contact with the Islamic Revolutionary Guard Corps (IRGC) has acted on one of the regime's longest-standing fatwas. Leaders and media figures in Iran are ecstatic.

Iran's willingness to plot attacks on dissidents or put bounties on the heads of artists it considers blasphemers is well established and unlikely to change. It has repeatedly plotted to kill people on U.S. soil and the best CAIR can muster is a generic "any violence targeting anyone in our society" is bad.

No release. No news conference. A passing mention of Rushdie's name. Maybe CAIR was on the lookout for a pick-up basketball game in Tel Aviv.

Denouncing the Islamic Republic of Iran, especially when its edicts lead to public assassination attempts, shouldn't be a difficult thing to do. But CAIR has chosen to sit this one out.

We hear you loud and clear.