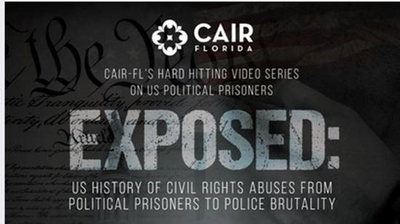 The Council on American-Islamic Relations' (CAIR) Florida chapter concluded a jaw-dropping, eyebrow raising series of online discussions last weekend, all of which whitewash radical Islamists with direct ties to terrorists or violence as victims of law enforcement set-ups.

The series, "EXPOSED: A History of Civil Rights Abuses, From Political Prisoners to Police Brutality," is all the more astounding since CAIR has its own documented links to a Hamas-support network which it has spent more than a decade trying to sweep under the rug.

Two of the four sessions in the series focus on prosecutions for supporting Hamas and the Palestinian Islamic Jihad (PIJ). Each program was inherently dishonest, casting people who knowingly helped underwrite an infrastructure of death for Palestinian terrorist groups as humanitarian and civil rights activists targeted because of their ideas and supposed influence.

Five former officials at the Holy Land Foundation for Relief and Development, based outside Dallas, were found guilty in 2008 of illegally routing more than $12 million to Hamas. A CAIR promotion called them "a group of wrongfully convicted humanitarians at the core of one of biggest cases of US political persecution of the century."

"We have to recognize the U.S. does have a history, unfortunately, of targeting civil rights leaders through intimidation, through spying," CAIR-Florida Executive Director Hassan Shibly says in a promotional video for the series. "We see what they did with Martin Luther King. They actually kept complete files on him."

Shibly's comparison is an obscenity, and that part of the preview has been taken down. King led a movement steadfastly committed to nonviolence and civil disobedience aimed at creating a groundswell to change unjust laws.

"We had no alternative except to prepare for direct action, whereby we would present our very bodies as a means of laying our case before the conscience of the local and the national community," he wrote in his 1963 "Letter from a Birmingham Jail."

"Mindful of the difficulties involved, we decided to undertake a process of self purification. We began a series of workshops on nonviolence, and we repeatedly asked ourselves: 'Are you able to accept blows without retaliating?' 'Are you able to endure the ordeal of jail?'"

Their own words and deeds prove that the two Palestinian terror support cases showcased by CAIR represent the antithesis of King's non-violent philosophy.

The proof is in the reactions the two alleged civil rights victims Shibly defends had to the same brutal terrorist attack. In January 1995, two suicide bombers targeted a bus station in Beit Lid, Israel. The first blast struck a group of soldiers gathered near a snack bar. The second bomber blew himself up as people rushed in to tend to the wounded. In the end, 19 soldiers were killed and 60 others wounded.

"The latest operation, carried out by the two mujahideen who were martyred for the sake of God, is the best guide and witness to what they believing few can do in the face of Arab and Islamic collapse at the heels of the Zionist enemy..." he wrote.

"I call upon you to try to extend true support of the jihad effort in Palestine so that operations such as these can continue, so that the people do not lose faith in Islam and its representatives..."

This was no momentary lapse into radicalization or embracing jihad for Al-Arian.

During a 1991 fundraiser in Cleveland, for example, he called for a "Palestine from the sea to the river, not the Palestine of cowardice, not the Palestine that they want us to bargain with." A Palestinian state stretching from the Mediterranean Sea to the Jordan River can only exist if Israel is eliminated.

And that's exactly what the Palestinian Islamic Jihad wants, according to its charter, which FBI agents found in Al-Arian's possession. "Jihad is the solution to liberate Palestine and topple the infidel regimes," the document says.

"The rejection of any peaceful solution for the Palestinian Cause, and the affirmation of the jihad solution and the martyrdom style as the only option for liberation" is one of its political constants.

In Shibly's apparent view, it doesn't get much more King-ian than that. King, it should be noted, staunchly supported Israel's right to exist.

But during the CAIR "EXPOSED" program, Al-Arian played into Shibly's narrative, asking, "Who are trying to silence us? ... Either they're trying to promote Israel's agenda in the United States. You know, many Zionist organizations and many Islamophobes as well as those who have a beef with Muslims, I mean they obviously don't want the Muslims to be empowered or to have a seat at the table. So what they do is that they use these tactics. You know, 'you're being anti-Semitic, you're being anti-Israeli, anti-Zionist.'"

In short, Al-Arian claims he was the victim of a set-up by Jews.

Similarly, Hamas was never mentioned during Sunday's session about the Holy Land Foundation. Also similarly, a CAIR official found a way to blames Jews for what she sees as an injustice and insinuate they have the power to compel the Justice Department to prosecute people.

Shibly did not participate in the HLF episode, which featured the daughters of defendants Mufid Abdulqader and Shukri Abu Baker. They largely rehashed arguments repeatedly rejected by the courts.

Internal records seized by the FBI showed that during the late 1980s and 1990s, HLF was "'the official organization' for fundraising" for a Muslim Brotherhood-created network called the Palestine Committee, the Fifth U.S. Circuit Court of Appeals found in upholding the convictions.

One Palestine Committee report described the group's mission as "defending the Islamic cause in Palestine and support for the emerging movement, the Hamas Movement." 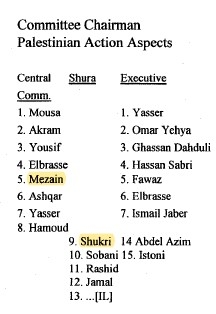 HLF fundraisers routinely featured Hamas officials and performers praising Hamas. Jurors saw a skit in which defendant Mufid Abdulqader plays a Hamas member who kills an Israeli after saying, "I am Hamas, O dear ones," and telling the Israeli character: "And you must leave." The audience responds "O cursed one."

Abu Baker, El-Mezain and Ghassan Elashi all were Palestine Committee members, appearing on the committee's internal telephone list and participating in its meetings. The same is true for Shibly's boss, CAIR co-founder and Executive Director Nihad Awad.

Within months of CAIR's creation, the Palestine Committee included it in a roster of groups under its umbrella.

During a secret Palestine Committee meeting held in 1993, Abu Baker argued that there should be no rules, no restraint, in fighting the Zionist enemy. "War is deception," he said. "We are fighting our enemy with a kind ear and we never thought of deceiving it. War is deception. Deceive, camouflage ... Deceive your enemy."

Awad was there, too, using the clumsy code-name for Hamas that participants agreed upon. They called it "Samah," which is simply Hamas spelled backwards. "If there is a political issue, a Samah's input, for instance, about this or that, we inform people to contact their representatives," Awad said during the Philadelphia meeting.

Now, Abu Baker, his family, and CAIR argue he is innocent, among what Shibly called "the greatest victims in the assault on civil rights in the United States."

The same is true with CAIR's whitewashing of Al-Arian's Palestinian Islamic Jihad ties.

Al-Arian, deported to Turkey in 2015 as part of his guilty plea for conspiring to help the PIJ, cast the actions behind his guilty plea as innocent and unrelated to supporting a terrorist group.

"I pled to not telling a journalist the name of Ramadan Abdullah, which it was true. I didn't tell him the name. I pled that I hired a lawyer for my brother-in-law, which I did hire a lawyer, one of the best brilliant lawyers in the United States. Today he is the legal director of the ACLU. I pled to the fact that I hired one of the excellent researchers from Europe to the research center I founded at USF. These are the three things I pled to."

"Ramadan Abdullah" was another PIJ Shura member whom Al-Arian brought to the United States. The journalist asked about him in 1995 because reports out of the Middle East said his full name was Ramadan Abdullah Shallah, and that he was the new PIJ secretary general.

Al-Arian's references to his brother-in-law and one of the "excellent researchers from Europe are about Mazen Al-Najjar and Basheer Nafi, both documented members of the PIJ Shura Council.

The ability to stick to a story despite evidence to the contrary prompted U.S. District Judge James Moody, who presided over Al-Arian's 2005 criminal trial, to call him a "master manipulator" during a sentencing hearing.

"The evidence was clear in this case that you were a leader of the Palestinian Islamic Jihad. You were on the board of directors and an officer, the secretary. Directors control the action of an organization, even the PIJ; and you were an active leader."

Shibly and CAIR did not offer their audience any of this information. To do so would blow the narrative that Al-Arian simply was among those "who care about civil rights, who care about justice, who care about human rights, because what happened in Florida to Dr. Sami Al-Arian was a tremendous travesty of justice."

When CAIR hired Shibly in 2011, we wrote about his expressed support for Hizballah as a college student:

"They're absolutely not a terrorist organization," Shibly said in 2006, and "any war against them is illegitimate."

At the time, it might have been easy to write that off as the blathering of a young man still in school. But that's the exact message Shibly – and by extension his bosses at CAIR – is saying about Hamas and PIJ in this "exposed" series.