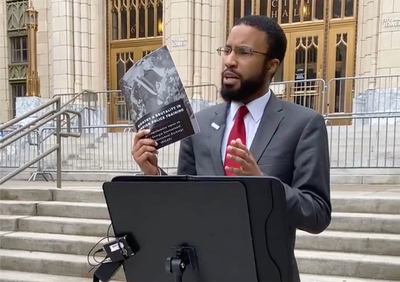 The Council on American-Islamic Relations (CAIR) Georgia chapter was intent on making news Monday, but apparently it couldn't decide how.

The objective was clear – to smear the Georgia International Law Enforcement Exchange (GILEE), because GILEE takes American police leaders to Israel. It's part of a years-long campaign by Israel-bashers to discredit similar police exchanges. For years, they have claimed that the programs, somehow are responsible for police violence in America, especially against Black people.

But there was no new report to release. The document CAIR officials touted Monday was issued in 2019. At some point, someone in CAIR may have realized a two-year-old report is a weak hook on which to hang a news conference. So the message changed.

CAIR's national Deputy Director Edward Ahmed Mitchell said his organization decided to "designate GILEE as an anti-Muslim hate group ... that is an official designation now." That language was not mentioned in the news release. But if Atlanta allows its police department to continue working with GILEE, "they'll be working with an officially designated anti-Muslim hate group."

Neither CAIR nor Executive Director Nihad Awad have ever uttered a critical word about Turkey's autocratic, Hamas-supporting, Islamist leader Recep Tayyip Erdogan, named the world's "worst jailer of journalists" in 2017. Erdogan's government also "is dismantling human rights protections and democratic norms in Turkey on a scale unprecedented in the 18 years he has been in office," Human Rights Watch said in March.

Despite that, CAIR and its leaders have traveled to Turkey in support of the regime and met repeatedly with its officials when they come to the United States. During a 2016 meeting, Awad lamented "a pathological fear of Turkey here" and suggested the Turkish government make "more efforts to explain what is happening [in] Turkey to the American public."

This is not an isolated example of CAIR working closely with some of the world's worst human rights violators.

It sought donations both from Saudi Arabia and the United Arab Emirates in 2006. Nihad Awad, the only executive director CAIR has had, met with Iranian President Hasan Rouhani in 2018 and with then-President Mahmoud Ahmadinejad in 2008. Three years later, he appealed to Libyan dictator Muammar Gaddafi for help underwriting a campaign to give copies of the Quran to Americans.

CAIR's criticisms of GILEE were no stronger.

There is no hands-on training in the police exchange program. Still, Mitchell claimed that minority communities suffer as a result of American police leaders participating. A portion of GILEE's program deals with urban policing, which Mitchell called a code for "communities of color."

GILEE trains police leaders, Mitchell said, and "the culture, the training – that's the dangerous thing that's happening. They're getting the training and then we're seeing that training manifest in the actions of the officers."

In addition, the 2019 report "released" Monday links the exchange program to "deadly police shootings that occurred in Georgia" and said working "with human rights violators make these problems worse."

Blaming Israel as a "source of American police violence or racism shifts the blame from the United States to Israel" and "furthers an antisemitic ideology," the anti-Israel group Jewish Voice for Peace (JVP) said in June 2020.

It was a striking message, since JVP had spent the previous three years alleging the police exchange programs like Gilee's led to "extrajudicial executions, shoot-to-kill policies, police murders .."

A JVP Georgia representative, Connie Sosnoff, joined CAIR in Monday's news conference. She did not challenge Mitchell's claim, but she did say the police exchanges promote "state violence and control that endanger us all."

Despite all the passionate rhetoric, critics like JVP and CAIR have produced no evidence anyone has been harmed as a result of American law enforcement interacting with Israelis, let alone anyone being killed, an Investigative Project on Terrorism (IPT) investigation last year found.

No whistleblower has emerged to support claims that the programs teach hatred or encourage excessive police responses targeting minority communities. The harshest criticism CAIR's report offers comes from Georgia State Police Chief Joseph Spillane, who in 2019 said he wouldn't be comfortable having his officers patrol neighborhoods with their blue lights on as Israeli police do.

Spillane was not a participant in the CAIR news conference demanding Atlanta stop working with GILEE.

The IPT investigation last year included interviews with five police chiefs who attended different exchange trips. All said the criticism offered by groups like CAIR and JVP bore no resemblance to their experiences.

"So I knew my experience was nothing even close to what they were trying to portray or what they've said was the purpose of the training, the executive level leadership training," said Fayetteville, N.C. Police Chief Gina V. Hawkins. "Definitely, none of the information in regards to any type of policing that's against any type of demographics, because that, one, would go totally against my beliefs, and totally against the beliefs of law enforcement, the professional law enforcement that we know."

"I did not learn repressive kind of techniques as it relates to what the the narratives have been around this exchange," said former Atlanta Police Chief George Turner. His experience inspired Turner to create the Atlanta Police Leadership Institute, helping Black officers who have become police chiefs in Georgia, Montgomery, Ala., and Memphis.

Former Olympia, Wash. Chief Ronnie Roberts said his exposure to Israel's multi-faith population triggered a spiritual awakening. It reinforced to him "that we were called to love and serve people. And so I just tried to lead with humility and, and that was a big part of just a, a deepening of the responsibility and role that I had as a police leader in my community that I've been placed here for a reason."

It was unclear how many reporters showed up for CAIR's "official designation." It appears that only one Atlanta news outlet, 11Alive, took the bait and ran a story. An anchor recapped the claims in a 45-second segment.