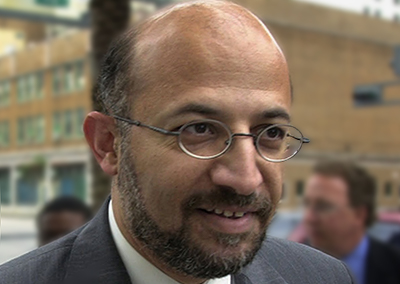 Called "a master manipulator" by a federal judge, Al-Arian pleaded guilty to one count of "Conspiracy to make or receive contributions of funds, goods or services to or for the benefit of the Palestinian Islamic Jihad (PIJ), a Specially Designated Terrorist.[1]

Al-Arian was sentenced on May 1, 2006, to 57 months in prison (which includes 38 months time served) and has agreed to be deported after serving the prison term.[2]

At Al-Arian's sentencing hearing, U.S. District Court Judge James Moody called Al-Arian a "master manipulator," adding "[y]ou looked your neighbors in the eyes and said you had nothing to do with the Palestinian Islamic Jihad. This trial exposed that as a lie."[3]

Credit for serving his sentence has been frozen by a contempt citation due to Al-Arian's refusal to testify before a Virginia grand jury investigating the International Institute of Islamic Thought (IIIT), a think tank that supported Al-Arian's Tampa operation. Though he cannot be charged with a crime if he provides truthful testimony, Al-Arian argues his plea agreement should spare him from testifying.[4]

Al-Arian spent more than a decade lying about his involvement with the PIJ, including in meetings with an FBI agent as early as 1991 and in an interview with Steven Emerson for the documentary "Jihad in America." Evidence uncovered during the investigation into Al-Arian showed he may have drafted the manifesto of PIJ.[5]

Born in Kuwait, a resident of Temple Terrace and a former tenured University of South Florida computer science professor, Al-Arian also founded the the Islamic Committee for Palestine. An associate publicly described it in 1991 as "the active arm of the Islamic Jihad movement in Palestine."He also incorporated the World and Islam Studies Enterprise (WISE), an Islamic think tank that worked with a USF faculty group to organize seminars and share libraries.

He gained national political prominence after his brother in law, Mazen Al-Najjar, was arrested as a national security threat pending a deportation order. Al-Najjar, also a PIJ Shura Council member, denied any involvement with the group. Al-Arian used the case to lobby against the use of secret evidence in immigration court, winning over prominent leaders of both the Democratic and Republican parties. He was photographed with George W. Bush during the 2000 presidential campaign and later enjoyed an invitation to meet Bush advisors at the White House.

For more on Al-Arian, see our "Terrorism Cases" section.

[5] In the Matter of Searches Involving 555 Grove Street, Herndon, VA and Related Locations, "Affidavit for Application in Support of Search Warrant (ED VA)