Of Mosques and Men 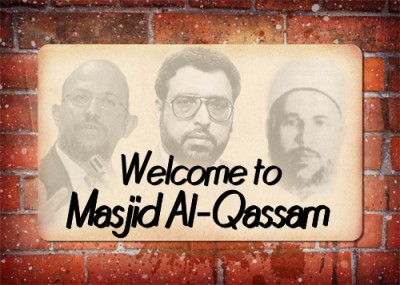 There are times when an unfortunate name can come back to haunt someone even when he or she had nothing to do with the original moniker. Think of Rick Perry's ranch, or a Florida mosque named for a terrorist icon.

The Islamic Community of Tampa, also known as the al-Qassam mosque, hosts an ironic event Friday evening with the local Council on American-Islamic Relations (CAIR) chapter. The open house aims to advance "understanding Islam." Speakers will discuss Muslim beliefs and try to clear up "misconceptions about Islam, and Islam's condemnation of terrorism," a promotional release said.

That's a difficult sell when the mosque exalts Izzedin al-Qassam, who remains an inspirational figure to Palestinian terrorists. Hamas named its terrorist operations branch for al-Qassam. Most rockets fired from Gaza toward Israeli homes and schools are called Qassam rockets.

"The [Palestinian] Islamic Jihad's supporters have elevated him almost to a saintly status," wrote Palestinian academic Ziad Abu Amr in his book Islamic Fundamentalism in the West Bank and Gaza. It was al-Qassam who merged religion and violence, advocating "God's book in one hand, and the rifle in the other."

Echoing Al-Qassam, both Hamas and Islamic Jihad have charters rejecting any peaceful resolution to the conflict with Israel. Islamic Jihad calls for "The creation of a state of terror, instability and panic in the souls of Zionists and especially the groups of settlers, and force them to leave their houses." Hamas dismisses peace talks as a game beneath Palestinian dignity. "There is no solution to the Palestinian problem except by Jihad. The initiatives, proposals and International Conferences are but a waste of time, an exercise in futility. The Palestinian people are too noble to have their future, their right and their destiny submitted to a vain game."

It is fairly rare for a mosque to be named for an individual. A plaque outside the mosque hails al-Qassam as the one who "declared Jihad against the British and Zionist invasion of Palestine. He was martyred on November 19, 1935 in Yabrod, Palestine. Al-Qassam has become a symbol of heroism, resistance, occupation, and invasion of steadfast Palestine."

The mosque's name changed in 1989 when it was run by Sami Al-Arian, a University of South Florida computer scientist who secretly served on the Palestinian Islamic Jihad's shura council, or governing board. Al-Arian sheltered other board members, including Secretary General Ramadan Shallah. Shallah took over the Islamic Jihad in 1995, just six months after leaving Tampa.

A year earlier, when evidence shows Al-Arian was fighting to keep the Islamic Jihad alive in the face of a financial crisis, Al-Arian wrote to immigration officials on Al-Qassam Mosque letterhead seeking a work visa for Shallah to be the mosque's imam.

In interviews for Investigative Project on Terrorism Executive Director Steven Emerson's "Jihad in America" documentary and a subsequent newspaper investigation, Al-Arian denied the mosque's name indicated any bond with the Jihad or other terrorists. Al-Qassam "became a symbol in Palestine of the first to resist and fight for freedom," he said in 1995. "He was strengthened by religion and devotion to God."

Federal agents arrested Al-Arian nine years ago and he has not been back to the mosque since. He pleaded guilty to conspiracy to provide services to the Islamic Jihad and records make clear his prominent role in the organization. In all those years, however, mosque leaders have not thought to rid their house of worship of Al-Qassam's name.

But they plan to welcome the public Friday evening to persuade the public they stand for the opposite of al-Qassam's message of "God's book in one hand, and the rifle in the other."

It would be like hosting a forum on the South's historic embrace of integration at the Church of the Martyr Bull Connor.

Both the mosque and CAIR seem oblivious.

"Ignorance leads to misunderstanding, which in turn leads to fear, hatred, discrimination, and even violence," said CAIR-Tampa executive director Hassan Shibly in the release. "By reaching out and getting to know each other, we can love each other as a community and recognize that our differences need not divide us."

But violence was at the heart of al-Qassam's message. Jihad, he said, was the only path to freedom. According to a booklet issued by the Islamic Association for Palestine, an arm in a Hamas-support network, al-Qassam instructed followers that "Jihad is a religious obligation till the Judgement (sic) Day. We all need to do Jihad in the name of God to free our countries from the colonialist to become Islamic States that apply God's laws.

"Arm yourself no matter what are the circumstances. Sell everything you have and buy weapons to fight the occupation."

The mosque maintains a significant link to the Al-Arian era through its president, Noor Salhab. In the early 1990s, Salhab leased his home to Al-Arian as office space for a think-tank called the World and Islam Studies Enterprise, where Shallah was a director.

Years later, another tenant drew scrutiny from federal law enforcement. Ahmed Mohamed was arrested by police in South Carolina with a trunk load of explosive material and a laptop containing jihadi videos. Mohamed posted one such video to Youtube, showing would-be jihadists how to make remote-controlled bombs "to be used against those who fight for the United States" since he considered them and their allies fighting in Arab countries to be "invaders."

Salhab is not responsible for his tenants' behavior. And leasing a house to two separate people implicated in terror-support cases could happen to anyone, right? But if the mosque and its partners in CAIR truly are interested in correcting misconceptions about their faith, they might start by removing the name as a show of sincerity.

It takes a bit of sacrifice

Hey, everybody know that it takes sacrifice to really accomplish worthwhile and meaningful goals. Yeah I know that usually means human blood, but as long as its not Al-Qassam's blood, that's OK, isn't it? He could just strap bombs onto some retarded kids. I mean, what kind of life can they look forward to anyway?