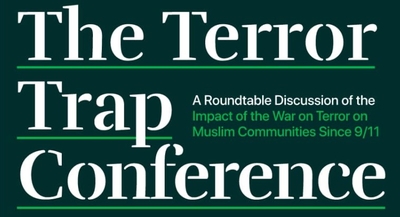 The dozens of thwarted jihadist plots, it argues, were made up out of whole cloth to entrap innocent Muslims.

The report further portrays the "War on Terror" as a "War on Islam," an old ploy used by Islamist groups that actually has been shown to radicalize. The report also advises that Muslim Americans "not open the doors of their mosques and community centers to the FBI and law enforcement until entrapment and targeting of communities ends," a long time obstructionist goal of American Islamists.

But the report's objectivity is suspect. One chapter's author, and the executive director of one of its sponsors, the Coalition for Civil Freedoms (CCF), are the adult children of a convicted Palestinian Islamic Jihad (PIJ) operative. The PIJ is a terrorist group committed to destroying Israel and creating an Islamic state in its place.

Sami Al-Arian's Turkey-based academic program, the Center for Islam and Global Affairs (CIGA), was a participant in a "Terror Trap Conference" Oct.18-19 to promote the report. Al-Arian wrote one of the report's chapters. He and his daughter Leena, the CCF executive director, are listed among the report's editors.

Al-Arian served on the PIJ's Shura, or leadership council. But, given the heavy Al-Arian family involvement in the report, it is not surprising to find that the Palestinian Islamic Jihad is never mentioned. Instead, Abdullah Al-Arian's chapter portrays his father as a victim of law enforcement targeting.

"The 2003 arrest and subsequent trial of Sami Al-Arian, a university professor, Palestine activist, and civil rights advocate send shockwaves across the American Muslim community due to his prominent role in promoting civic engagement, lobbying, and electoral politics," writes Abdullah Al-Arian, an associate professor of history at Georgetown University's Qatar campus.

Called "a master manipulator" by the federal judge presiding over his case, Sami Al-Arian pleaded guilty in 2006 to conspiring to make or receive contributions of funds, goods or services to or for the benefit of PIJ. He was deported to Turkey in 2015 as part of that plea agreement where he now heads CIGA.

Abdullah Al-Arian also mentions the Hamas financing trial of the Holy Land Foundation for Relief and Development (HLF) in his analysis of "the witch-hunt against American Muslim institutions, and the ways in which they were systemically attacked."

"HLF officers were sentenced to up to 65 years in federal prison, despite the government never providing any evidence that the charitable donations were used to fund violence," he writes.

Although prosecutors did not tie HLF charitable donations to an actual Hamas attack, they did prove that the Islamist charity praised Hamas, promoted its propaganda, hosted leaders of the terrorist group as speakers and sent money to Hamas-controlled zakat, or charity, committees.

Testimony and other evidence produced in court showed over $12 million dollars had been funneled by the Islamist charity to Hamas. In fact, the charity was part of a Muslim Brotherhood-created Hamas-support network in the U.S. called the "Palestine Committee" to advance Hamas' political and financial goals in the country.

Al-Arian also alleged that "law enforcement agencies seeking to justify the exorbitant material resources and permissive legal terrain they enjoyed began to rely increasingly on paid informants to entrap unsuspecting Muslim youth into terror plots that those federal authorities would then foil." He gave examples of the "Newburgh Four" and the "Fort Dix Five" terror plots.

At the conference featuring sessions moderated by their father's center, CCF Executive Director Leena Al-Arian echoed her brother's claims that Islamist terrorists are a law enforcement creation. "There are no sleeper cells in the United States and almost 95% of all national security cases are a result of this deeply flawed law enforcement strategy called preemptive prosecution," she said, citing a 2019 report her center co-produced with the Islamic Circle for North America (ICNA) Council for Social Justice and Project SALAM, a Muslim legal advocacy group.

A federal appeals court upheld the Fort Dix Five convictions in 2011. The five men plotted to kill U.S. military personnel in an armed attack on a military base. A unanimous ruling by the U.S. Court of Appeals for the Third Circuit rejected the appeal. The investigation started with a tip about a video showing the defendants "at a firing range in the Pocono Mountains, shooting weapons and shouting 'Allah Akbar!' and 'jihad in the States.'" The subsequent investigation produced evidence that the group "viewed and shared videos of violent jihadist activities, including beheadings, around the world; they viewed and shared videos of lectures advocating violent jihad against non-Muslims; they sought to acquire numerous weapons, including automatic firearms and rocket propelled grenades; they returned to the Poconos, where they again engaged in shooting practice; they discussed plans to attack the United States military."

The Newburgh Four were convicted in a 2009 plot to bomb Bronx synagogues and shoot down U.S. military planes. But at the "Terror Trap" conference, CCF board chair Steve Downs, described them as "hapless kids... that had no money had no car had no ability to do anything were talked in [sic] offered $250,000 to engage in a terrorist plot."

In a recording, the group's leader James Cromitie was heard telling an FBI informant, "The worst brother in Islam is better than 10 billion Yahudi [Jew]." "With no hesitation, I will kill 10 Yahudis [Jews]." Cromitie also expressed a desire to "do something to America" and "die like a shahid, a martyr."

Although an appeals court acknowledged that there would have been no case without the informant, it upheld the convictions.

Downs also claimed that there are "no terrorists at home" and accused the FBI of "creating terrorists." "They need the terrorists because that is how they justify the budget and how they ... justify creating all of this surveillance which basically locks them into power...allows them to control the Muslim community."

CCF describes itself as "a coalition of civil liberties and human rights organizations that challenges preemptive prosecution and the post-9/11 targeting, surveillance, and criminalization of Muslim communities." CCF is also known as the National Coalition to Protect Civil Freedoms (NCPCF), an organization Al-Arian helped found in 2010. He continues to promote the group from Turkey.

The report, co-sponsored by a host of Islamist organizations including The Islamic Circle for North America (ICNA) Council for Social Justice, CAGE, CIGA, Muslim Justice League, and United Voices for America, does not mention any post-9/11 jihadist terror attacks in the United States that were motivated by an Islamist ideology.

In May 2020, for example, 20-year-old Adam Alsahli opened fire at the Naval Air Station Corpus Christi, Texas, injuring a sailor. Alsahli, who was killed after Naval police returned fire, had expressed support for key Muslim Brotherhood leaders and al-Qaida, according to his social media posts.

In 2015, 14 people were gunned down at a San Bernardino office Christmas party by husband and wife jihadists Syed Rizwan Farook and Tashfeen Malik. The couple had "self-radicalized" online and Malik had pledged allegiance to now-deceased ISIS leader Abu Bakr Al-Baghdadi.

When he paused in his slaughter of 49 people at Orlando's Pulse nightclub, Omar Mateen pledged allegiance to ISIS and told a 911 operator that "America [needs] to stop bombing Syria and Iraq. They are killing a lot of innocent people." His attack was triggered, he said, by a U.S. strike that killed an ISIS commander in Iraq.

Though far-right terrorism represents a significant, increasing threat, a December 2020 Global Terrorism Index (GTI) report shows that "the deadliest form of terrorism in the West over the past two decades has been religious terrorism, which has almost exclusively taken the form of radical Islamist terrorism." Islamist terrorist organizations caused more than half of the total deaths recorded in 2019.

Speakers at the "Terror Trap" conference also blamed Israel and the "Zionist lobby" for using the war on terror to inhibit efforts within the Muslim community "to organize for Palestinian liberation or against Zionism."

Celine Qussiny who serves on the Palestinian Youth Movement's (PYM) national executive board, claimed that Israel "played a critical role in developing...the racially manufactured hysteria that legitimized the expansions of borders and policing and militarization and predictive policing and extra judicial killings and crowd control and surveillance." PYM has honored leaders of the Marxist-Leninist Popular Front for the Liberation of Palestine (PFLP), a U.S.-designated Foreign Terrorist Organization (FTO).

In line with the report's overall anti-Israel and anti-Zionist bias, a policy recommendation advises Muslim institutions to "not partner with Zionist organizations. It is important to understand the role of such organizations within the broader context of the War on terror, which builds off the narrative of Palestinian 'terrorism.' Muslims should not accept training by such groups including the Anti–Defamation League (ADL) and should, under no circumstance, partner with them."

This isn't the first time purported counter-narratives about the war on terrorism have become an Al-Arian family affair. There are reasonable ways to criticize viewed excesses in the war on terrorism, but pretending there is not, and has not been, an Islamist terror threat to the United States, calls the effort's legitimacy into question. The "Terror Trap" is a naked attempt to ignore the record and promote dangerous policy ideas.