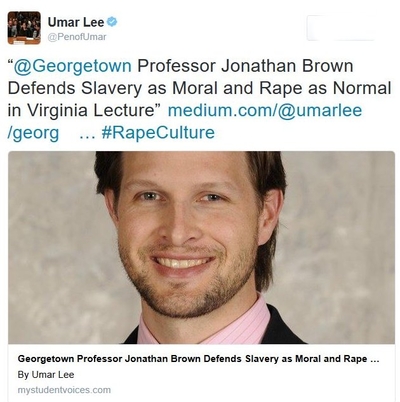 A Georgetown University Islamic civilization professor's lecture on slavery, asserting that it isn't "morally evil to own somebody" and minimizing the need for sexual consent from a spouse is bringing the school renewed criticism and scrutiny.

Jonathan Brown's remarks came last week during a lecture at the International Institute for Islamic Thought (IIIT), an organization Brown works closely with, and one that law enforcement has long suspected of being a Muslim Brotherhood front.

People obsess too much over the word "slavery," Brown said, when what matters are the conditions, whether people were treated well or harshly.

Brown is a Georgetown associate professor and the Prince Alwaleed bin Talal Chair of Islamic Civilization in the School of Foreign Service.

"Slavery cannot just be treated as a moral evil in and of itself," he said, adding that "I don't think it's morally evil to own somebody because we own lots of people all around us. And we're owned by people. And this obsession of thinking of slavery as property – it's treated as this inconceivable sin. I think that's actually a really odd and unhelpful way to think about slavery and kind of gets you locked in this way of thinking where, if you talk about ownership and people, that you've already transgressed some moral boundary that you can't come back from. But I don't think that's true at all."

During a question and answer period, audience member Umar Lee pushed back at what he saw as Brown's outrageous rationalization. Brown tried to shut him up by pointing out that Muhammad, Islam's prophet, owned slaves.

But Brown seemed to contradict himself when he took to Twitter on Saturday to say, "Islam as a faith and I as a person condemn slavery, rape and concubinage."

Lee posted an audio of the full lecture online and described how disturbing he found Brown's message.

"I left this lecture deeply troubled this man had been given a platform to defend slavery and rape. I also left knowing that a Catholic Priest at Georgetown would be fired immediately if he defended the brutality of Catholic-led slavery in Latin America or defended rape. The same would be true of a rabbi at Yeshiva University. So, why as Muslims should we tolerate and invite someone like Brown to speak and why is Brown hideously exploiting Georgetown's commitment to be inclusive?"

In the Daily Banter, Michael Luciano described Brown's theories as "exactly the type of gobbledygook that emanates so frequently from religious studies departments. His main contention is that the word 'slavery' is not a particularly useful term because throughout the ages there have many different types of slavery with varying degrees of ownership, subjugation, exploitation, and brutality."

The incident marks just the latest, and perhaps the most outrageous example of a rigid and intemperate form of Islamism that dominates the university's Center for Muslim Christian Understanding (CMCU).

The Center received a $20 million endowment from Saudi Prince Alwaleed bin Talal in 2005, raising concerns that it would turn a blind eye to Saudi Arabian policies and the extreme version of Islam it underwrites globally.

Center director John Esposito worked intimately with hardcore Islamists, publicly declaring that Sami Al-Arian, Brown's father-in-law and a documented member of the terrorist group Palestinian Islamic Jihad's Shura Council, is "a man of conscience with a strong commitment to peace and justice."

Esposito also served as an expert witness in the Hamas-support prosecution of the Texas-based Holy Land Foundation for Relief and Development. In addition, Esposito joined five other American Middle East Studies directors in vowing in 2014"not to collaborate on projects and events involving Israeli academic institutions."

In other words, a tenured faculty member who exercises academic freedom blacklisted colleagues who wish to do the same.

Like his boss, Brown frequently works with Islamist groups, speaking at joint annual conferences hosted by the Muslim American Society (MAS) – which was founded by Muslim Brotherhood members in the United States – and the Islamic Circle of North America (ICNA), which instructs followers to read works by Islamist luminaries such as Sayyid Abu 'Ala Maududi.

During the 2015 MAS-ICNA conference, for example, Brown painted a picture of the American criminal justice as out to destroy innocent Muslims.

Meanwhile, at a separate Georgetown center, Associate Professor Christine Fair repeatedly attacked Muslim feminist Asra Nomani in recent weeks after Nomani publicly acknowledged voting for Donald Trump. Nomani complained to the university after Fair called her a "clueless dolt" who "pimped herself out" for media attention. That prompted Fair to write, "F–K YOU. GO TO HELL." 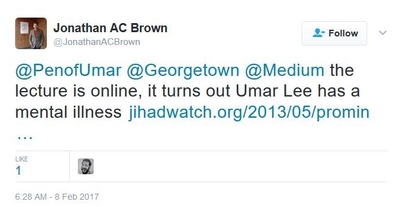 In a subsequent podcast, Lee called this unprofessional and slander. It's the price too many Muslims pay for taking opposing viewpoints, he said.

Lee also was shocked by Brown's comments about sexual consent. Consent is a relatively recent more, Brown said. But it's a bit of a fantasy, because no person truly enjoys the autonomy required to grant consent.

"We think of – let's say in the modern United States – the sine qua non of morally correct sex is consent. We think of people as autonomous agents. Everybody's an autonomous agent. And it's the consent of that autonomous agent that makes a sexual action acceptable. ...If you take away the consent element, then everyone starts flipping out. At that point, then you get rape, you get sexual acts done by people that are too young – we perceive as too young to consent. And these are sort of the great moral wrongs of our society ... For most of human history, human beings have not thought of consent as the essential feature of morally correct sexual activity. And second, we fetishize the idea of autonomy to the extent that we forget – again, who's really free? Are we really autonomous people?" 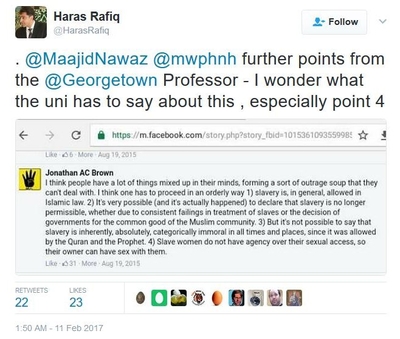 It's a viewpoint that Brown has pushed for at least 18 months. Slavery is "allowed in Islamic law" even if it may no longer be acceptable, he wrote in an August 2015 Facebook post. "But it's not possible to say that slavery is inherently, absolutely, categorically immoral in all times and places, since it was allowed by the Quran and the Prophet," he wrote.

And, since slave women are not free, "their owner can have sex with them" without consent.

Brown's views are consistent with many people in the Muslim community who "still hold that there is no marital rape," Lee said in his podcast. But in 2017, Brown "defended non-consensual sex, which is in stark contrast to the policies of Georgetown University."

As University of Chicago evolutionary biologist and author Jerry Coyne wrote, Brown's comments are exercises in academic freedom: "But that doesn't stop me from excoriating him as a smooth-talking, highly paid, and odious apologist for some of the worst excesses of Islam."