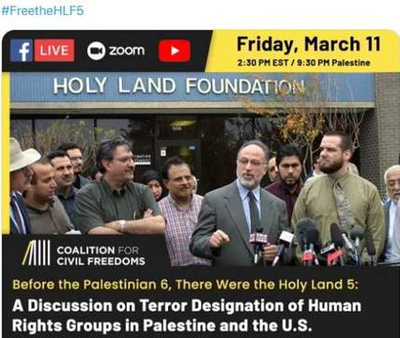 The Biden administration should pardon five former officials from a now-defunct, Texas-based charity convicted of illegally routing millions of dollars to Hamas, speakers said during a March 11 webinar.

There is a "general pattern of the U.S. and Israel criminalizing basic forms of solidarity with other people as 'terrorism,'" claimed Amith Gupta, staff attorney with the Coalition for Civil Freedoms (CCF).

"The Holy Land [Foundation for Relief and Development] prosecution was clouded by the fear and suspicion of Muslims in the aftermath of the 9/11 attacks," he added, "but the Israeli military's decision to outlaw Palestinian human rights groups as 'terrorists' indicates that then and now these are politically motivated accusations."

Islamists launched a similar campaign during the Obama administration's final days and continue to claim the "Holy Land Five" are victims of an injustice. This effort continues despite testimony and other evidence produced in the 2007-2008 trials showing more than $12 million dollars had been illegally funneled by the Islamist charity to Hamas.

The five HLF leaders were sentenced to long prison terms in what is regarded as the largest terror financing case in U.S. history.

A 2011 appellate ruling upheld the convictions.

"Although these entities performed some legitimate charitable functions, they were actually Hamas social institutions," the ruling said. "By supporting such entities, the defendants facilitated Hamas's activity by furthering its popularity among Palestinians and by providing a funding resource. This, in turn, allowed Hamas to concentrate its efforts on violent activity."

The ruling also affirmed that "[t]he financial link between the Holy Land Foundation and Hamas was established at the Foundation's genesis and continued until it was severed by the Government's intervention in 2001."

CCF, the webinar's sponsor, describes itself as "a coalition of civil liberties and human rights organizations that challenges preemptive prosecution and the post-9/11 targeting, surveillance, and criminalization of Muslim communities." Also known as the National Coalition to Protect Civil Freedoms (NCPCF), CCF was founded by convicted Palestinian Islamic Jihad (PIJ) operative Sami Al-Arian in 2010.

Al-Arian was deported to Turkey in 2015, and his daughter Leena now leads CCF.

PIJ, like Hamas, is a U.S.-designated terrorist group committed to destroying Israel and creating an Islamic state in its place.

Gupta also discussed a letter calling on President Biden to pardon the "Holy Land Five," whose signatories include several pro-terror and Israel-hating radical groups such as the Council on American-Islamic Relations (CAIR), ICNA Council for Social Justice, The Aafia Foundation, Samidoun Palestinian Prisoner Solidarity Network, Palestinian Youth Movement, U.S. Palestinian Community Network, US Campaign for the Academic and Cultural Boycott of Israel (USACBI), Palestine Legal, Al-Awda: the Palestine Right to Return Coalition, Jewish Voice for Peace, and Within Our Lifetime - United for Palestine.

"The defendants in the Holy Land Foundation case were never accused of directly funding terrorist organizations or terrorist attacks, nor were the Palestinian charities they funded accused of doing so," the letter said. "Nonetheless, they were prosecuted under U.S. 'material support' legislation on the notion that the social programs they financed help win the 'hearts and minds' of Palestinian people for Hamas."

The letter also cast doubt on evidence presented in the trial from FISA wiretaps and "questionable foreign intelligence from Israel," arguing "[t]hese dubious claims echo those that the Israeli government has made against Palestinian human rights groups and advocates for decades, including this past October when it designated as 'terrorist' six Palestinian human rights organizations that have worked closely with the international community, triggering widespread international condemnation."

Although prosecutors did not tie HLF charitable donations to an actual Hamas attack, they did prove that the Islamist charity praised Hamas, promoted its propaganda, hosted leaders of the terrorist group as speakers and sent money to Hamas-controlled zakat, or charity, committees. In fact, the charity was part of a Muslim Brotherhood-created Hamas-support network in the U.S. called the "Palestine Committee" to advance Hamas's political and financial goals in the country.

FBI "searches yielded numerous documents corroborating the creation of the Palestine Committee and its oversight of HLF as a fundraising arm for Hamas," the Fifth Circuit U.S. Court of Appeals ruling said. It was "headed" by Hamas political leader Mousa Abu Marzook, who helped create HLF and other committee branches.

"Those organizations were active under the cover of 'Civic Society Organizations', but in practice belong to and constitute an arm of the Organization's [PFLP's] leadership, the main activity of which is the 'liberation of Palestine' and the destruction of Israel," said a National Bureau for Counter Terror Financing of Israel (NBCTF) press release.

It alleged the "civil society organizations" were "controlled by senior leaders" of the PFLP and employed several activists tied to the terrorist group "who participated in terror activity."

But the panelists chose to whitewash all terror ties of the so-called "civil society organizations" describing the Israeli action as an "attack on...the human rights movement" and the "result [of] the international community failing to impose consequences on the Israeli government for their systematic violations of international law and human rights and for their attacks on human rights defenders."

Al-Haq does "incredibly important work," claimed Human Rights Watch Director Omar Shakir. He called Addameer "one of the most...prominent Palestinian prisoners' rights organization that does incredible advocacy on the rights of Palestinian prisoners." He described these and other organizations targeted in the Israeli designation as "the heart of Palestinian civil society...[and] models of global south human rights organizers...that were not only following all the standards of...the international community...but were also...engaging with UN mechanisms, UN systems, etc."

Addameer calls itself as a "Palestinian non-governmental, civil institution that works to support Palestinian political prisoners held in Israeli and Palestinian prisons." But according to a Jerusalem Post report, "evidence previously released by the [Strategic Affairs] ministry detailed how Addameer, one of the six organizations, has board members, legal staff, a researcher, a financial officer, a co-founder and a director-general who are also PFLP terrorists, some of whom carried out recruitment and acts of terror during their time working at Addameer."

A 2007 Israeli Supreme Court judgment described Al-Haq Director Shawan Jabarin as a "Dr. Jekyll and Mr. Hyde" for leading a human rights organization while serving as "an activist in a terrorist organization [PFLP] which does not shy away from acts of murder and attempted murder which have nothing to do with rights, and on the contrary deny the most basic of all human rights, the most fundamental of fundamental right, without which there are no other rights—the right to life."

In July 2020, the Dutch government suspended aid to the Ramallah-based Union of Agricultural Work Committees (UAWC), saying the money paid salaries to terrorists involved in a 2019 terror attack that killed a teenager. Samer Arbid and Abdul Razeq Farraj, who are currently standing trial for the murder in Israel, are alleged to be PFLP members and also UAWC employees.

"Resisting Israel is not terrorism," Peled said, "now we have a report that states very clearly that Israel has been perpetrating a crime against humanity, against the Palestinian people since 1948, no one standing up against it can possibly be accused of terrorism."

Like HRW, Amnesty International has an anti-Israel bias. It is also a staunch advocate of the antisemitic Boycott, Divestment, Sanctions (BDS) movement that seeks to isolate Israel economically and politically.

CCF has helped push narratives whitewashing Islamist terror post-9/11 and described U.S. terror prosecutions as "largely a charade designed to make the American public believe that a terrorist army is loose in the U.S." By loosely lumping the HLF case with Israel's designation of Palestinian charities under the broad rubric of the war on terror, the March 11 webinar appears to be yet another effort to paint a false picture of Islamist charities solely doing good work despite ample evidence connecting them to terrorist groups and their leaders.