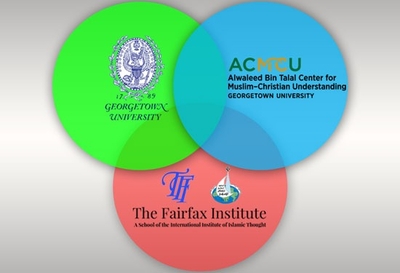 Two of Georgetown University's top faculty in religion are partnering with a private Virginia think tank long suspected of serving as a front for the Muslim Brotherhood.

The think tank in question, the International Institute of Islamic Thought (IIIT), twice has been the subject of law enforcement investigations, once during the 1980s and again starting in 2003. Its senior leaders were listed among "members and leaders of the IKHWAN [Muslim Brotherhood]" in the United States in records obtained by the IPT from a closed FBI investigation through a Freedom of Information Act request.

The center received a $20 million gift from Saudi Prince Alwaleed bin Talal in 2005.

The Fairfax Institute offers certificates in Imam and Muslim Community Leadership and in Islamic Thought. That may sound benign on its face, but the Institute's parent, the IIIT, long has touted the "Islamization of Knowledge," a program which makes Islam the key to solving society's ills.

In implementation plans, IIIT co-founder Ismail al-Faruqi made it clear his institute's outreach was not about teaching Westerners about Islam. Rather, its purpose is to infuse superior Islamic principles to add revelation to Western academic pursuits which are based solely on "reasoning."

While the Muslim community in the undeveloped world "is in many respects backward," Faruqi wrote in 1982, "...in the respect of possessing the truth, the ideological statement of it which is most conducive to religious, ethical, and material prosperity at the same time, the ummah is second to none. Because of Islam, the ummah alone possesses the vision required for the felicity of humankind, for history to be as Allah (SWT) has desired it to be."

During a 2010 lecture, Voll described Faruqi, a Muslim Brotherhood luminary who was murdered in 1986, as "a good case of the modern intellectual who is a believer and provides a good example for thinking about what it means to be a 'believing intellectual' in the modern era."

ACMCU founding director John Esposito was a student of Faruqi's at Temple University.

IIIT, located about 22 miles from Washington, D.C. in Herndon, Va., also was investigated for possible terror financing. A 2003 search warrant affidavit alleged that the think tank was part of a network of up to 100 non-profit and for-profit organizations, inter-related through corporate officers and holding companies that facilitated terrorist funding. Financial records reviewed by law enforcement officials exhibited "a convoluted web of multiple transactions between related corporations and charities that made it virtually impossible for federal investigators to ascertain where the money ... ultimately went."

Some of the money that was clearly traceable included direct payments to a Florida think-tank which then was home to at least four members of the Palestinian Islamic Jihad's Shura Council, in effect, its governing board. One of those directors, Ramadan Shallah, has led the terrorist group since late 1995.

IIIT President Taha Jaber Al-Alwani "spoke at ICP conferences with Al-Arian, Shallah, Sheik Odeh (spiritual leader and co-founder of PIJ) and Sheik Rahman (the 'Blind Sheik' convicted of conspiracy to blow up New York tunnels and the United Nations in New York in October 1995). Inasmuch as ICP conferences were, in essence, PIJ conferences, Alwani has long been a supporter of PIJ," the 2003 affidavit said.

In a 1992 letter to Al-Arian, Al-Alwani referred to WISE as "a part of us and an extension of us." Records also list Al-Alwani as chairman of the WISE board of trustees.

A look at past statements by Voll and Brown shows their consistent pattern of embracing and defending Islamists, including Al-Arian, who was deported from the United States a year ago and is believed to be in Turkey.

A 2007 article Voll co-authored with Esposito described Al-Arian as "a proud and committed American and Palestinian professor and activist" and claimed that both Al-Arian and the American justice system has become "casualties of the erosion of civil liberties post-9/11."

Brown, likewise, has played down the threat from radical Islamists, and has alleged rising Islamophobia to have led to wrongful convictions in a number of federally-prosecuted terrorism cases.

Muslims care about a lot of issues, Brown said last May at a conference organized by the Islamist groups Muslim American Society and the Islamic Circle of North America. That includes events in Kashmir, the Palestinian cause and more. "Or whether it's here in America, whether it's Muslims targeted for entrapment by the Justice Department or whether it's Muslims who are convicted of crimes that they didn't commit because the justice system is biased against them. Because racism and stereotypes against Muslims are allowed to influence the outcome of trials."

This, he claimed, has a chilling effect on free speech.

In a July 2011 interview with The Egyptian Gazette, Brown dismissed any danger from Islamists gaining power in the Egyptian elections following the overthrow of President Hosni Mubarak: "I do not think life in Egypt will dramatically change if the president or ruling party are self-proclaimed 'Islamists.' Egypt is already a very Islamic society: no-one drinks in the street, people dress conservatively, even the financial system has to justify its operations in terms of Islam."

"The country is too important to write off and this is not 1979," he added. "The 'Islamic threat' so often touted by Western pundits has been undermined by factors like AK Party rule in Turkey, and it will be less frightening when people see that Egypt is not much different from before."

But once in power, the Brotherhood moved to amend the Constitution to entrench its hold on government, and violently suppressed public protests. Brown was right to distinguish Egypt from Iran in 1979, though. Egypt, unlike the Islamic Republic, still had an independent military which forced the Islamists from power after spontaneous street demonstrations attracted millions of people demanding change.

The ACMCU had to postpone a program on "Egypt and the Struggle for Democracy" in the fall of 2013, after it was revealed that the only Coptic Christian panelist invited was a member of Egypt's Nazi Party.

At a 2012 IamY (Inspiring American Muslim Youth) convention, Brown claimed Muslims were falsely implicated in terrorist cases and blamed Islamophobia for this. As an example, he cited the case of a Staten Island man who was "tried for including the Hizballah channel in a cable package he's offering." The Staten Island man, who Brown claimed was "not even doing anything...just offering a cable channel," in fact pleaded guilty to providing support to the terrorist group Hizballah and was sentenced to 5½ years in prison.

Brown further asserted that al-Qaida operative Tarek Mehanna was convicted "because he simply put up on his website some al-Qaida videos with translations." Mehanna was sentenced to 17½ years in prison in 2012 on terrorism-related charges that included travel to the Middle East to obtain military-type training at a terrorist camp to prepare for jihad against U.S. interests, including American and allied troops stationed in Iraq.

He also criticized the long prison sentences meted out to several senior officials tied to the Holy Land Foundation for funneling millions of dollars to the U.S.-designated terrorist group Hamas: "You have people now, people who ran the Holy Land Foundation charity organization in this country in prison for 60-80 years. Underground, for what? Feeding orphans?" In 2008 a federal jury found all defendants in the trial guilty on all counts of helping finance Hamas.

Brown's boss at Georgetown University, John Esposito, testified as an expert witness for the defense.

In comments provided to the IPT, Jeffrey Bale, an expert on violent political and religious extremism at the Middlebury Institute of International Studies at Monterey (MIIS), California, expressed concern at "the affiliation of Professors Voll and Brown with a school linked to the IIIT, a well-known component of the Muslim Brotherhood network in the U.S."

"Both students and other observers who recognize the essentially anti-democratic agendas of such Islamist groups should be concerned about this formal affiliation with the Fairfax Institute because it is another indicator of the pro-Islamist biases of these particular academics," Bale said.

Despite its known radical ties, IIIT continues to operate ostensibly as a legitimate academic institution that seeks to "bridge the intellectual divide between the Islamic tradition and Western civilization" through various funding and outreach programs with mainstream American universities and colleges and government-funded institutions.

In 2005, in line with its funding of WISE at USF in the 1990s, the Virginia think tank offered to endow a chair in Islamic Studies at the University of Central Florida outside Orlando. IIIT also made a $1.5 million grant to George Mason University in 2008 to help expand its Islamic studies program.

In addition, IIIT signed a memorandum of agreement with Shenandoah University in Winchester, Va., to promote academic exchanges that included hosting a program on Islam in collaboration with the radical Muslim Student Association and Student Life's Intercultural Programs at Shenandoah University.

Not every university has taken IIIT's money, however. In 2008, Temple University – where Faruqi once taught Esposito – refused $1.5 million in funding from IIIT for a chair in Islamic studies after concerns were raised about IIIT's alleged ties to terrorist organizations.

In addition to Georgetown professors serving on the faculty of the Fairfax Institute, the IPT investigation found that the Institute recently offered a course taught by instructors from Georgetown University's The Bridge Initiative titled, "Understanding Islamophobia in America."

"Students will learn about the history of the term 'Islamophobia' and its earliest manifestations; its parallels with similar prejudices that have affected other groups through time; the primary mechanisms that drive Islamophobia in the United States; its emergence in both liberal and conservative discourse; its manifestations in mainstream and social media; and creative ways to counter it," a course syllabus posted on the institute's website reads.

It comes as little surprise that the Initiative's project director is John Esposito.

Not enough can be said about Islam and it's negative impact in America's colleges and universities. Islam's goal is defined in the Muslim Brotherhood's founding charter and not one so-called peaceful Islamist country condemns them...although Egypt did act recently...they're goal is complete domination over western countries...a world-wide caliphate if you will. I know that you know this, but if I were to take a poll outside a voter's precinct I'd be lucky to find one voter in a million who even has the slightest idea. By the way, I do not have 'Islamophobia', but I do have Georgtownophobia, and Harvardophobia, and Yaleophobia, and ...you get the picture!

Thank you for your good work exposing Islamist influence in academia

This all would be embarrassing if it were not so common. However very few people are taking the trouble to understand and follow up on these connections.

I especially like your detailed coverage and naming of names. Academics are not the only ones who can claim "freedom of speech".