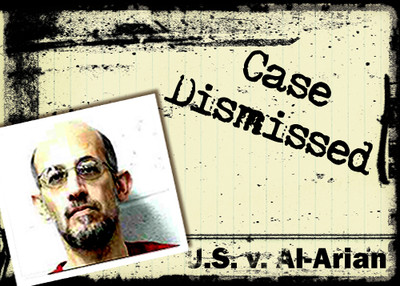 A criminal contempt case against Sami Al-Arian – a member of the Palestinian Islamic Jihad (PIJ)'s governing board during the 1990s – has been dismissed after a federal judge froze proceedings for five years.

Al-Arian initially was on house-arrest, but U.S. District Judge Leonie Brinkema dramatically reduced the conditions imposed on him over time. He used that freedom to return to political activity, including his December attendance at pro-Muslim Brotherhood events, including one at Cannon Office Building on Capitol Hill.

In moving to drop the case, prosecutors indicated they plan to enforce a deportation provision in a separate, 2006 plea agreement Al-Arian signed.

The contempt case grew out of a 2006 grand jury subpoena issued while Al-Arian was finishing a 57-month sentence for conspiring to provide goods or services to the PIJ, a designated terrorist group.

Prosecutors wanted to ask him about possible terror support by a Northern Virginia think-tank which helped fund a similar venture Al-Arian ran in Tampa.

He refused, insisting that his plea agreement ruled out what he called "cooperation" with the government. It's a claim his attorney, Jonathan Turley, repeated Friday in announcing that the contempt charges were dropped.

But it is a claim nobody, including Al-Arian and Turley, has been able to substantiate. They never produced any record to indicate that prosecutors agreed to binding a grand jury in another jurisdiction, something which a federal judge said was so extraordinary he had never heard of the idea. There is no language about it in the plea agreement and Al-Arian made no mention of it when he entered the plea before a U.S. Magistrate and later was sentenced by a federal judge.

"The Court has never heard of the Government agreeing that someone would forever be protected from grand jury subpoena," wrote U.S. District Judge James Moody. "It is incredible that such a novel provision would not be placed in the written agreement in clear and specific terms."

The 4th Circuit Court of Appeals rejected his argument about the plea deal when Al-Arian was found in civil contempt. The 11th Circuit issued a similar opinion in 2008.

But Brinkema, who already had voiced skepticism about the contempt case, seemed determined not to let it go to trial. She refused to rule on pending motions to either dismiss the case or set a trial date. She twice promised in writing to deliver rulings that were never produced.

In announcing the case's end, Turley also posted a statement from the Al-Arian family, saying they have had "a long and difficult 11 years ... in what has ultimately been shown to be a political case. We are relieved that this ordeal finally appears to be at an end. We hope that today's events bring to a conclusion the government's pursuit of Dr. Al-Arian and that he can finally be able to resume his life with his family in freedom."

That freedom, however, may not be in the United States. In filing a motion to dismiss the 2008 indictment Friday, prosecutors noted the amount of time the case has languished on the docket:

"The United States reaffirms the evaluations of the merit of the prosecution that were made in 2008 and again in 2010. Nevertheless, in light of the passage of time without resolution, the United States has decided that the best available course of action is to move to dismiss the indictment so that action can be taken to remove the defendant from the United States in accordance with the Judicial Order of Removal issued on May 1, 2006, by United States District Judge James S. Moody, Jr., in the Middle District of Florida." [Emphasis added]

It is unclear where officials might try to send Al-Arian, or how long it will take to make arrangements. Al-Arian is a stateless Palestinian with a felony conviction for terror support, and unless the government has already arranged his deportation, that process could be complex and lengthy.

Do you honestly believe that Al-Arian will ever be deported? If in these past 11 years he's continued to make contact with the Muslim Brotherhood and lobby Congress, it proves that he is not repentant for his acts of supporting terrorist groups. I so hope that the government won't cave in on this case since so much time and effort have gone into making sure he receives some punishment. He needs to be deported with his family back to where he came from...