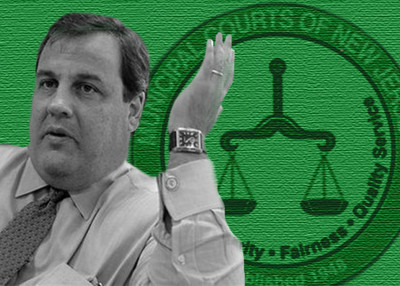 New Jersey Gov. Chris Christie's nomination of Sohail Mohammed to be a state judge shows the governor's tin ear for radical Islam. Not only did he appoint a longtime mouthpiece for radical Islamists to be a judge, but Christie has also turned a blind eye to the activities of one of Mohammed's clients – radical imam Mohammed Qatanani, head of one of New Jersey's largest mosques.

Qatanani has a history of Hamas support and was related by marriage to a leading Hamas operative in the West Bank. This fall, Qatanani will return to a New Jersey immigration court, where the Department of Homeland Security is fighting to have him deported. In his initial application for a green card filed in 1999, government lawyers say Qatanani failed to disclose a conviction in an Israeli military court for being a Hamas member and providing support to the terrorist group.

Oddly, Christie – a Republican who was then the U.S. Attorney for New Jersey – sided with Qatanani against DHS, allowing a top lieutenant, Assistant U.S. Attorney Charles McKenna, to testify as a character witness at Qatanani's first immigration trial, and publicly embracing the imam at a Ramadan breakfast at his mosque. Christie later appointed McKenna as New Jersey's head of homeland security..

One online newsletter even included a claim that a "Zionist commando orchestrated the 9/11 terrorist attacks" and shows support for a "Rabbi" from the extremist Jewish organization Neturei Karta, which denies the right of Israel to exist and supports its dismantling.

The AMU has criticized some of the response to the September 11 attacks, especially regarding the PATRIOT Act. Explaining why the AMU had become more politically active and was holding voter registration drives, one employee of AMU said: "Right now, the Patriot Act—basically it's unconstitutional…I believe it targets Muslims unfairly. If someone's going to come out with a bill that's discriminatory, I'm not going to vote for them."

As general counsel, Mohammed bucked several high-profile terror support prosecutions. After authorities shut down the Holy Land Foundation near Dallas for alleged Hamas support in 2001, Mohammed told the Record of Bergen County, N.J., that the government was unjustly singling out Muslim organizations."People see this as another example of how heavy-handed the administration has been thus far," he said.

The move was newsworthy in New Jersey because an HLF officer, Mohammed El-Mezain, preceded Qatanani as imam of the Islamic Center of Passaic County. El-Mezain and four fellow defendants were convicted of illegally routing millions of dollars to Hamas in 2008.

Additionally, Mohammed publicly defended Palestinian Islamic Jihad operative Sami Al-Arian following a 2003 indictment which alleged he was a North American leader of the Palestinian Islamic Jihad. Appearing on MSNBC, Mohammed criticized the fact that it took years of investigation before the indictment was issued. "It all points out to the distrust that the Muslim community have, which is this is nothing but a witch-hunt," he said. "This is nothing but a politically motivated indictment, and all you are waiting for is the right opportunity to indict the person, the climate is right."

Al-Arian, a longtime professor at the University of South Florida, pleaded guilty to one count of conspiring to provide goods and services to the PIJ. In sentencing him, a federal judge said the evidence made it clear he was "a leader of the Palestinian Islamic Jihad. You were on the board of directors and an officer, the secretary. Directors control the actions of an organization, even the PIJ; and you were an active leader."

In addition to defending accused terrorists, Mohammed is defensive about acknowledging their motivations. He was critical of a case brought by Christie's office when the governor was U.S. Attorney. The Fort Dix defendants were accused, and later convicted, of plotting a mass casualty attack on the New Jersey military base as an act of jihad. Dix. Mohammed objected to the use of the phrase "Islamic militants" in the government's case.

Then there's this exchange with MSNBC's Chris Matthews about two months after 9/11. Mohammed bristled at Matthews' reference to the "Islamic terrorists" behind the attacks:

If you're a policeman, you have got to use your brain here. What else do they have in common? They all come from Middle Eastern countries. They're all Islamic zealots.

MOHAMMED: Well, you cannot call them -- and anybody who professes or who says that he believes in a religion, a peaceful religion, cannot take the banner and crash a plane, and you blame every single person who follows this faith.

Even while fighting to stay in the country, Mohammed's former client, Qatanani, has participated in radical rallies and programs. During a rally in New York last March, demonstrators repeated a chant that subtly calls for Israel's destruction. "From the river to the sea, Palestine will be free."

It's a familiar chant at pro-Palestinian rallies. A Palestinian state stretching from the Jordan River to the Mediterranean Sea would cover all of what is now the state of Israel. In his remarks, which came after the chant, Qatanani expressed his agreement.

"Palestine will be free one day," he told the rally. "And we will see it very soon by your actions, by your standing for justice, justice, freedom, the liberation of the land will be very soon."

Just before the 2008 ruling in Qatanani's favor was issued, and while he was still the U.S. attorney, Christie praised the imam at a Ramadan breakfast held at Qatanani's mosque. "My view is he's always had a very good relationship with us, and he's a man of great goodwill," Christie said, reportedly embracing him.

The U.S. Attorney's office was not a party to the case, Christie said, and his praise for Qatanani was not meant to be "a commentary on the dispute between the imam and DHS" but after 9/11, he found the imam "to be a constructive force in attempting to strengthen our relations with that community."

During the original immigration trial, one of Christie's assistant U.S. attorneys, Charles B. McKenna, testified as a character witness for Qatanani. In his ruling, Immigration Court Judge Alberto Riefkohl said he was particularly impressed by "law enforcement officers that took time from their respective duties to appear before the Court" on Qatanani's behalf. Other supportive testimony came from the sheriffs of Bergen and Passaic counties and U.S. Rep. Bill Pascrell, D-Paterson.

Qatanani's visa application was prepared by Mohammed's law firm and Mohammed sat with his client during an interview with DHS and FBI agents in 2005, immigration court records show. "QATANANI advised that he trusted his attorney, Sohail Mohammed, so he signed the I-485 form."

During the interview, Qatanani admitted having spent three months in an Israeli prison but he did not disclose that on his application for permanent residency. He also admitted being in the Muslim Brotherhood, but said he left the group in 1991 when working and going to school while raising a family left him with no time.

The Muslim Brotherhood is a global religious and political movement that seeks to spread Islamic law. In a 1991 document, a member of the American branch explained that the group's goal was " a kind of grand Jihad in eliminating and destroying the Western civilization from within and "sabotaging" its miserable house by their hands and the hands of the believers so that it is eliminated and God's religion is made victorious over all other religions."

An immigration judge ruled in Qatanani's favor in September 2008, saying the Israeli government documents and the testimony of U.S. law enforcement officials were not credible. However, the Board of Immigration Appeals sent the case back to the original judge in October 2009, finding that Judge Riefkohl committed a series of errors in downplaying the Israeli evidence and the agents' testimonies. The appellate panel found that the Israeli evidence was "properly authenticated and that there was no adequate basis for the Immigration Judge to give them 'very low evidentiary weight."

The judge's assessment of the law enforcement agents' testimony was "clearly erroneous," the board's decision said.

In his original immigration trial, government attorneys presented Israeli court records showing Qatanani was convicted by an Israeli court in 1993 of being a Hamas member and of providing support to the terrorist group.

When he applied for a new visa, Qatanani marked "no" to questions about whether he had ever been "arrested, cited, charged, indicted, fined, or imprisoned for breaking or violating any law or ordinance" in other countries.

"An alien who has provided material support to a terrorist organization is inadmissible to the United States," government attorneys wrote. "Therefore, by answering the questions in the negative, the respondent cut-off a line of inquiry relevant to his eligibility for adjustment of status."

Christie's support for Islamists such as Qatanani and Mohammed betrays either naivete or calculation. Either is troubling.

I applaud Christie who stood-up to these Islamiphobes.

This is the guy that's on the short list for Mitt's VP, remember that.

Christie manipulated the Judiciary Committee for this appt.

Gentlemen/Ladies; I am a former NJ State Senator very well known for exposing corruption in this state for the last 15 years. Gov. Christie is aware of who I am. As the Former NJ U.S. Atty, I sent numerous letters to him containing information about corruption. He noted that during a speech in Southern Jersey. As such when I requested formal permission to testify at the Judiciary Committee hearing re: the Sohiel Mohammed appointment, I was never called. I had been a member of the Judiciary Committee. They cancelled the hearing at which I was to speak and then held it while I was away. They claim they forgot to call me and apologized. I did not accept the apology and told the Committee Aide it was deliberate, not an oversight.

There were a few who testified against Sohiel Mohammed. However, all of the NJ Press knows of my background and my testimony would have carried weight. I am very unhappy with this nomination but even more disturbed at Christie's response calling those against Mr. Mohammed "crazies." I submit that Gov. Christie actually knows very little about Sohiel Mohammed; even less about the structures of Jihadist leaning organizations. Thus, Christopher Christie has unwittingly or deliberately aided and abetted Jihadist- leaning organizations. It makes perfect sense, that when an individual is accused of terror activities in N.J. their atty will chose an Islamic leaning N.J. Judge.

The only thing to do now is to monitor Judge Mohammed's rulings and catalog whom goes before him; how Judge Mohammed rules. I have traveled worldwide and met with women living under Islamic rule. They have very hard lives. We, in this country would never have permitted such practices. Mark my words, under Judge Mohammed, those arrested for terrorism or violence against their women will be judged innocent. It is clear that Christopher Christie's national ambitions have colored his actions. He is playing to the many Muslim votes in Northern Jersey. Finally, it is essential to note that under strong Islamic rule overseas, women do not fare well at all. I would like U.S. Women's organizations to take up their plight. Alene S. Ammond, Former NJ State Senator; Former Director of the Public Policy Research Project, Inc. (analysis in the public Interest.) A former Democrat, now registered Republican. As a result of Gov. Christie's appointment of Sohiel Mohammed, I plan to remove that registration and become Independent. 856/429-0844

This is such frustrating and disappointing news. I have had a very high opinion of Governor Christie but this has knocked it down by at least 50%. If he doesn't have the wisdom to know who our enemies are - whether they appear to be peaceful or not - then he certainly doesn't have the wisdom to lead this country in any capacity. I'm sorry for this. This type of ideology is leading our country down the wrong path and is every bit as dangerous as the foolishness currently going on in Washington. So sad.