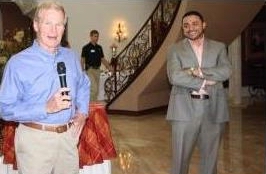 A top activist tied to one of the most notorious Islamist political organizations co-hosted a re-election fundraiser last month for U.S. Sen. Bill Nelson.

Details about the Florida Democrat's Oct. 22 fundraiser in Ocala are sparse—limited mostly to what Ahmed Bedier, former Council on American-Islamic Relations (CAIR) Tampa director, posted on his Facebook page. He published a series of pictures under the heading "Hosting Senator Bill Nelson." Those pictures showed Nelson, microphone in hand, addressing supporters as Bedier stood just behind him. The fundraiser was held in the home of a doctor named Manal Fakhoury.

Bedier remains closely tied to CAIR, a group linked to a Hamas-support network by evidence in the federal prosecution of a Texas-based Hamas charity called the Holy Land Foundation. Exhibits showed that CAIR was created as an arm of the "Palestine Committee, created to help Hamas politically and financially.

That evidence prompted the FBI to break formal communication with the group, despite its high profile position as a self-anointed voice of Muslim Americans.

One week before the Nelson fundraiser, Bedier served as master of ceremonies at CAIR's national banquet in Washington, D.C. "I am at the CAIR National Banquet," he wrote in an Oct. 15 Twitter post. "[C]an you make a donation?" 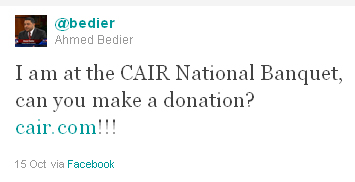 During the banquet, Bedier referred to the new memorial on the National Mall honoring Martin Luther King, envisioning a day in which "there's going to be a monument for some of these leaders at CAIR in Washington, D.C. that's going to be celebrated for generations to come."

The event raised $400,000, CAIR officials claim. Bedier hosted past national banquets for CAIR and has provided a similar service for some of its chapters.

It is not known how much Nelson's campaign for a third term in the United States Senate collected at the Ocala fundraiser. Campaign finance reports for this quarter are not due until January.

"Sen. Nelson has met, talked to, shaken hands with or posed for a picture with thousands of people at all kinds of events," an official in Nelson's Senate office said. "We're in the age of Facebook, Youtube and Twitter, and people are able to post just about anything they want."

Nelson and Bedier "have never worked together," the official said. But Bedier was listed on the host committee for the fundraiser and did speak to the audience. That was at Falhoury's invitation, the Nelson staff said. The campaign denied a request from the Investigative Project on Terrorism for a copy of the invitation or for a list of host committee members.

Rather than check out the names on the invitation list, the campaign checks out donors before accepting their money, the Nelson campaign staffer said. Bedier's $500 contribution was rejected "because the campaign learned of some highly controversial statements about Israel attributed to him. The statements aren't reflective of Sen. Nelson's long-held views and support of Israel."

Bedier has praised Nelson a few times in recent years, starting with a controversial 2006 trip to Syria by the Florida senator. The visit generated criticism because it clashed with the Bush administration policy of isolating Bashar al-Assad's regime due to its support for Hamas and Hizballah.

That year, Bedier told a local newspaper that his CAIR chapter was working with Nelson's office to help dozens of people get out of Lebanon during fighting between Israel and Hizballah.

But Bedier's interest in Nelson may have more to do with his run-ins with a Republican challenger.

"Raising money for Senator Nelson so he can kick Adam Hasner's butt," Bedier posted on his Facebook page. Hasner, a state representative, is among four Republicans vying for their party's nomination to challenge Nelson next November.

The episode shows that Nelson is unconcerned about who fills his campaign war chest, said Rick Wilson, a campaign consultant for the Hasner campaign. But "the details are almost not as important as the fact that Bill Nelson has been a vocal and unapologetic supporter of Barack Obama's hostile policy toward Israel," Wilson said.

Bedier and Hasner's history starts with Hasner's opposition to Bedier's Florida Muslim Capitol Day in 2009. Bedier's CAIR connections were among the issues Hasner raised at the time. 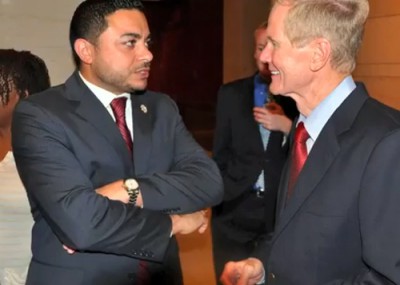 Nelson was photographed with Bedier during a Capitol Leadership Academy organized during the summer by Bedier's new organization. Nelson didn't know about United Voices, but understood from Fakhoury that it was a student leadership trip, an official in the Senate office said. Fakhoury has served as United Voices board chair.

Nelson "receives a lot of requests like that. He dropped by and said hello to the kids in the U.S. Capitol's visitor center. Mr. Bedier was with that group."

But while that program may seem politically neutral, Bedier has a history of minimizing terrorist connections and denying Islamist radicalism fuels terrorism.

He came to prominence during the prosecution of Sami Al-Arian for supporting the Palestinian Islamic Jihad. Al-Arian would plead guilty to conspiring to provide goods and services to the terrorist group. Among Bedier's statements:

Evidence unveiled during his trial showed Al-Arian served on the Jihad's governing board. He wrote a letter soliciting money after a double suicide bombing "so that operations such as these can continue" and was introduced as far back as 1991 as the head of the Jihad's "active arm."

Despite all this, Bedier traveled the country to host CAIR-sponsored screenings of the documentary sympathetic to Al-Arian.

More recently, in a November 2009 appearance on Tampa television, Bedier denied the Fort Hood shooting by Army psychiatrist Nidal Malik Hasan was a terrorist act and argued that Hasan's radical Islamist views should not be considered factors. By the time the show aired live, media reports showed that law enforcement already had linked Hasan to American-born al-Qaida cleric Anwar al-Awlaki and that Hasan printed "SoA," or soldier of Allah, on his business card. He gave a 2007 presentation in which he said it was "getting harder and harder for Muslims in the service to morally justify being in a military that seems constantly engaged against fellow Muslims." He told classmates he was "a Muslim first and an American second."

To Bedier, however, any discussion of a religious motivation in the shooting death of 13 people at Fort Hood was out of bounds. "I reject the concept that Islam has anything to do with this because anybody, regardless of your religion, I mean, this is not the first time a soldier has turned and killed his own people," he said.

In August, Bedier questioned whether an attack in southern Israel should be considered a terrorist act because the casualties included Israeli soldiers. The comments came on "True Talk," a weekly program Bedier hosts on a community radio station.

In the attack, gunman opened fire on buses and cars, and then detonated explosives as Israeli troops arrived. Six of the eight people killed were civilians.

After learning about the civilian casualties, Bedier backed off, but criticized Israel for retaliating against targets in Gaza. "When criminals act here and they go and kill somebody, they don't go and bomb their neighborhood. They go arrest him and they put him on trial. They go do an investigation. They don't immediately retaliate within a couple of hours by taking out their family."

Nelson's campaign said it knew nothing of these comments when Bedier's name was included on an invitation to his Ocala fundraiser, and that Nelson did not know Bedier or his controversial reputation.

"If he hadn't been called on it," Wilson said, "he wouldn't have done anything about it."

The Council of American Islamic Relations, Muslim Brotherhood & Cair are the same

In September, I found another press release on Islamonline regarding a presentation CAIR-OK said they delivered to the Oklahoma State School Boards Association about Islam with offers to provide Islamic materials to the Oklahoma Public Schools throughout the state. The OSSBA denies that CAIR did this presentation.

An email sent to CAIR-OK about this went unanswered.

CAIR tried unsuccessfully to get their name removed as an unindicted co-conspirator in the Holy Land Foundation terror funding trial. Furthermore, CAIR never denied their relationship with the Muslim Brotherhood and Hamas that I am aware. Two of the top officials at CAIR were secretly recorded by the FBI as their planned or attended a meeting with Hamas operatives in America. These officials, Omar Ahmad and Nihad Awad are still at CAIR in top positions.

If Nelson didn't return all $400,000 from the fundraiser, it doesn't matter that he returned the one donation from the guy he's with in the photos.... and apparently Nelson has worked with the guy regardless of his campaigns' denials... And also, don't forget that under Nelson's watch, NASA's mission changed from space flight to muslim outreach without a peep from him. I guess he was far too busy ramming Obamacare down our throats and fighting pythons in the everglades to be bothered with the loss of jobs at NASA.