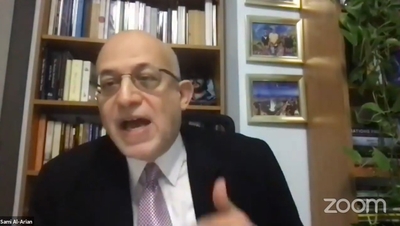 Nearly 30 years ago, Sami Al-Arian stood before an audience in Chicago and made his radical ideology as clear as possible.

"The Quran is our constitution," he bellowed. "Jihad is our path ... Victory to Islam... Death to Israel... Revolution... revolution till the victory."

Two weeks ago, Al-Arian appeared from Istanbul before a virtual audience and made his radical ideology clear, albeit in softer, more academic language.

The global Muslim community, or ummah, cannot realize its full potential without "defeating and dismantling the Zionist project," he said during a Dec. 18 panel discussion in Turkey.

"We cannot pursue an ummah project without actually attaining our real independence. We cannot attain our real independence without dealing with the problem of Israel," Al-Arian said, adding that "as long as Israel exists, the ummah will stay weak and fragmented, and disunited and divided and dependent and under control."

His comments were part of the Fourth International Conference on the Muslim Ummah, co-sponsored by Istanbul Sabahattin Zaim University's Center for Islam and Global Affairs (CIGA), where he now works.

Al-Arian has never publicly acknowledged serving on the Palestinian Islamic Jihad (PIJ) Shura Council, a leadership board, during the 1990s and early 2000s. It is unclear whether he continues to have a relationship with the PIJ, a U.S.-designated terrorist group that is committed to destroying Israel and creating an Islamic state in its place.

At the conference, Al-Arian emphasized the "centrality of the Palestinian cause" to the Muslim ummah "because of what Israel represents in this international system, in the regional system, and in the different relationships that take place in this region." He added that "confronting that menace, confronting that threat must become a priority" and "unite all efforts" within the ummah.

In the United States, Al-Arian founded the Islamic Committee for Palestine (ICP), which served as "the active arm of the Islamic Jihad Movement in Palestine" and raised money for the terrorist group. The PIJ rejects any peaceful settlement to the Israeli-Palestinian conflict. Only "the jihad solution and the martyrdom style" can liberate Palestine, the group's bylaws say.

Called "a master manipulator" by the federal judge presiding over his case, Al-Arian pled guilty in 2006 to conspiring to make or receive contributions of funds, goods or services to or for the benefit of PIJ. He was deported to Turkey in 2015 as part of that plea agreement and he now heads CIGA at Istanbul Sabahattin Zaim University.

During the discussion, Al-Arian claimed that Israel's creation "in the midst of the Muslim world was a major goal for colonialist powers to maintain hegemony and control, and to keep that area fragmented and weak."

"Any revivalist project," he added, "if it does not deal with this fact, then it is ignoring the 800 pound gorilla in the room."

Al-Arian also alleged that "forces were allied within months, within weeks" of the 2011 Arab Spring movement—a wave of pro-democracy uprisings that swept the Middle East—to "defeat and frustrate" it.

His theory drew support from another panelist, Hussein ElKazzaz, a prominent businessman who served as senior economic adviser in the Muslim Brotherhood government in Egypt, and who now directs the Istanbul-based Insan Center for Civilizational Studies.

The "secular civilizational model" with its "colonial project" was "going through [a] very fundamental kind of a crisis," ElKazzaz claimed. Western and Islamic "paradigms are providing us with extremely different perspectives, points of view, accumulation, definition of relevant questions and models and theories." "Middle ground solutions," "adaptations" and "trying to merge the two paradigms" are not going to work.

The time has come to launch "an Islamic civilizational model" in the Muslim world, ElKazzaz said. It is a "fundamental duty to make the Islamic model, the core of our lives ... Muslims are only exempt from living up to this [religious] obligation, if they absolutely cannot do it."

Al-Arian agreed, describing Islamic civilization as "the golden age of ... human progress in all parts and in all aspects of society based on Islamic principles and values" and citing the "ummatic vision" of Muslim Brotherhood luminary Ismail Raji al-Faruqi.

An April 2009 Hudson Institute report describes al-Faruqi as a "pioneer" of "the Islamization of knowledge":

"He [al-Faruqi] advocated a radical Islamization of new knowledge. He recognized that the crisis of the modern world was the crisis of knowledge. And this crisis, al-Faruqi thought, could only be cured via a new synthesis of all knowledge in an Islamic epistemological framework. The 'Islamization of Knowledge' project sought to arouse Muslims to become active participants in intellectual life and contribute to it from an Islamic perspective."

IIIT has twice has been the subject of law enforcement investigations, once during the 1980s and again starting in 2003, for possible terrorism financing. Its senior leaders were listed among "members and leaders of the IKHWAN [Muslim Brotherhood]" in the United States in records from a closed FBI investigation obtained by the Investigative Project on Terrorism through a Freedom of Information Act request.

By his own admission in a 2008 affidavit, Al-Arian detailed his close association with Al-Faruqi and IIIT. According to a 2003 search warrant affidavit, IIIT President Taha Jaber Al-Alwani "spoke at ICP conferences with Al-Arian, [the late-PIJ leader and co-founder Ramadan] Shallah, Sheik Odeh (spiritual leader and co-founder of PIJ) and Sheik Rahman (the 'Blind Sheik' convicted of conspiracy to blow up New York tunnels and the United Nations in New York in October 1995)."

In a 1992 letter to Al-Arian, Al-Alwani referred to the World and Islam Studies Enterprise (WISE), a think tank created by Al-Arian as "a part of us and an extension of us." Records also list Al-Alwani as chairman of the WISE board of trustees. Shallah served as WISE executive director, leaving just a few months before emerging as the PIJ secretary general in 1995. Shallah, who died in June, kept the job until 2018.

Today, Al-Arian claims that wanting to "dismantle" the world's only Jewish state, created to give Jews autonomy in their ancestral homeland and to serve as a refuge from global persecution of Jews is not a form of anti-Semitism. Rather, the "revivalist ummah project" can be "the savior of the religion of Judaism." Calling it a "settler-colonial project," Al-Arian claimed that Zionism "is not the expression of Judaism in its spiritual or religious expression. So that when we defeat and dismantle Zionism, we save Judaism, one of the greatest religions on earth from this assault of Zionism over it. And by doing that, we would have done a big service to the world."

He advocated building a global alliance of governmental and non-governmental organizations and movements so that "we can weaken Israel and by weakening Israel it can collapse and it can be dismantled." "When that happens, then we have asserted again the will of the ummah," he concluded.

The world has moved dramatically in the opposite direction in recent months, with Muslim-majority Arab states Bahrain, the United Arab Emirates, Sudan and Morocco all making peace with Israel and moving toward normalized relations.

A lot has happened in Sami Al-Arian's life since 1991. But his dreams of destroying an existing nation and its culture have not changed. "Defeating and dismantling the Zionist project" is just "death to Israel" in softer language.