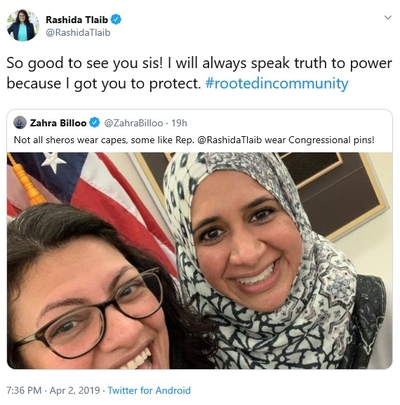 On Tuesday, Tlaib returned the love for her Islamist crew and expressed a need to "protect" anti-Israel figures like CAIR leader Zahra Billoo.

"So good to see you sis! I will always speak truth to power because I got you to protect #rootedincommunity," Tlaib tweeted yesterday in response to Billoo's praise for Tlaib.

It is unclear whether Tlaib recognizes that Billoo holds discriminatory views when it comes to "community." Billoo has repeatedly drawn a clear line in the sand concerning who she considers a legitimate Muslim leader.

"I'm really cautious of who I call a Muslim leader," Billoo said at a November gathering with the Ecumenical Peace Institute, warning others to be aware "as you see countries in the Middle East, and even Muslim activists in the United States, take problematic positions supporting the state of Israel or opposing the Boycott, Divestment and Sanctions (BDS) movement."

BDS seeks to isolate Israel economically and culturally. It is considered anti-Semitic because it singles out the world's only Jewish state and ignores countries with far worse human rights records.

This sentiment is expected of Billoo who, like other U.S. Islamist figures, consistently opposes any type of engagement or interfaith dialogue with organizations that maintain ties to Israel.

She has supported Palestinian terrorists attacking Israelis and openly called for the destruction of the Jewish state, in a not-so-veiled threat: "From the river to the sea, #Palestine will be free."

Tlaib's praise for Billoo followed Monday and Tuesday's Muslim Advocacy Day on Capitol Hill, organized by the U.S. Council of Muslims Organizations. The USCMO is an umbrella organization that includes the major American Islamist organizations including the Council on American Islamic Relations (CAIR), the Muslim American Society, American Muslims for Palestine (AMP), and the Islamic Circle of North America (ICNA) among others.

Other, more overt Muslim Brotherhood supporters from the New York-New Jersey area also lobbied members of Congress that day, including Tlaib. 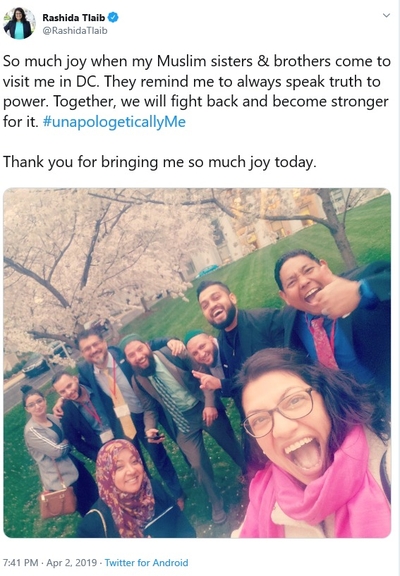 "So much joy when my Muslim sisters and brothers come to visit me in D.C.," Tlaib shared on her Twitter account Tuesday. Except these "Muslim sisters and brothers" are not members of a faith-based community that share messages of joy and peace. Many of the figures in her selfie have a long track record of spreading incitement and intolerance – especially when it comes to American supporters of the Jewish state.

Like Billoo and others, Ayloush openly called for Israel's termination, while Shibly similarly refused to condemn Hamas and vilified "Israel [and] its supporters as the "enemies of God and humanity."

These types of sentiments are anti-Semitic, according to the U.S. State Department's definition established in 2010. Dehumanizing Jews and "denying Israel the right to exist" are among several behaviors which constitute anti-Semitism.

Unlike Ilhan Omar, Rashida Tlaib's public comments thus far have not risen to the level of explicit anti-Semitism. She does openly support BDS. Her intimate relationship to figures who do express anti-Semitic sentiments deserves scrutiny.