The Orwellian Universe of Linda Sarsour

This article also was published Sept. 19 by the American Thinker. 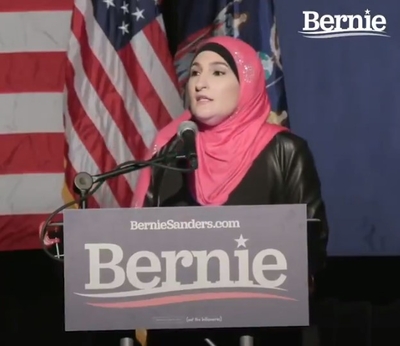 A wide-ranging set of comments by Linda Sarsour – the newly designated official surrogate for presidential candidate Bernie Sanders – reveals the full extent of the Orwellian world in which she lives. Her views are even more shocking than what we already know about her pathological fabrication of history, her abject anti-Semitism, her fanatical hatred of the Jewish state, and her growing leadership role in the Democratic Party.

"This sentiment of ending occupation in Palestine, of supporting Boycott, Divestment, Sanctions (BDS), or at least at the minimum, the right for people to engage in Boycott, Divestment, Sanctions, the idea that being a staunch critic of the state of Israel does not equal being anti-Semitic. This is just mainstream now," Sarsour said in a rare February interview with Jacobin magazine's podcast, "The Dig."

Since Sarsour claimed to divine what constitutes "mainstream," the U.S. House of Representatives passed a resolution condemning the Boycott, Divestment and Sanctions (BDS) movement targeting Israel by a 398-17 vote.

BDS is the campaign to coerce corporations and universities into boycotting or divesting investments in Israel, with the goal of eliminating the State of Israel. A one-state solution that Sarsour advocates would accomplish just that, ending up with the destruction of Israel.

The lopsided House vote includes support from 93 percent of House Democrats. BDS, the resolution says, makes peace more difficult to achieve because it gives Palestinians hope that international pressure, not negotiations, is the best path to achieving their goals.

It specifically acknowledged that "the Global BDS Movement does not recognize, and many of its supporters explicitly deny, the right of the Jewish people to national self-determination." That rejection meets the U.S. State Department's definition of anti-Semitism.

Meanwhile, a resolution filed by Ilhan Omar, D-Minn., defended BDS by placing it in line with the American Civil Rights Movement and argued it was similar to the boycott of apartheid South Africa and Nazi Germany.

During the interview, Sarsour reiterated her support for a supposed "binational" state for Israelis and Palestinians. But even the interviewer, Daniel Denvir, who supports this view, acknowledged that "it does presume that Israel as a Jewish state will no longer exist." Yet Sarsour denies this, falsely claiming that Palestinians – despite the pre-1948 Palestinian pogroms against Jews, the Arab wars dedicated to annihilating Israel, and nearly daily terrorist attacks that have killed thousands of Jews – have always wanted to live in peace with Israel.

"The Democratic Party has to make a choice," she said, "like whose side are you on here?"

This question is indicative of Linda Sarsour's vendetta against people who disagree with her black-and-white worldview. As co-chair of the Women's March, Sarsour used her platform to declare that one cannot be both a Zionist and a feminist.

This past week, Sarsour and two other radicals were dropped from the board. Yet, Sarsour – in what appears was a one for one substitution – was replaced by an official of the Hamas front group CAIR, Zahra Billoo, who has repeatedly called for the destruction of the Jewish state, not to mention denouncing U.S. counterterrorism policies as similar to Nazism. The Women's March dropped Billoo days later after intense criticism.

Yet during the Dig interview, Sarsour praised leaders within the women's rights movement who are "not just preaching intersectionality, but in fact [are] implementing it in the larger movements we're a part of." For Sarsour, intersectionality means bridging diverse agendas – as long as supporters of Israel are left out. "Palestinian rights are at the table because they're part of a larger progressive agenda," Sarsour declared. Israeli rights are not.

There is no room for nuance among U.S.-based Islamists. In an ISNA speech last year, Sansour promoted a modern-day blood-libel by claiming that Jews were behind police shootings of unarmed blacks. But despite Sarsour's radical and anti-Semitic statements, the Council on American Islamic Relations (CAIR), an unindicted co-conspirator in the largest Hamas money laundering case in U.S. history (and described by an FBI agent as a front group for Hamas, continues to promote her at high-profile events.

This "othering" dimension to Islamist-speak is only fueling sectarian discord in the United States.

It is ironic to hear Sarsour purport to denounce anti-Semitic preacher Minister Louis Farrakhan during the February interview, as someone whose statements "do not align with our unity principles at the Women's March." But these views did not prevent Sarsour from speaking at a 2015 event organized by Farrakhan, essentially legitimizing the anti-Semitic leader's conspiratorial and racist views. Sarsour deleted a 2015 Instagram post in which she gushed that Farrakhan "does not age, God bless him." She once called the Nation of Islam an "integral" part of the history of Islam.

As expected, Sarsour rails against Israel's military presence in the West Bank and its blockade of the Hamas-controlled Gaza Strip.

"This is an illegal military occupation being paid for by taxpayer dollars. We must be unequivocal when we stand against the murder, the assassinations, the sniping of peaceful protesters in Gaza."

Yet Sarsour provides zero nuance as to why Israel maintains military control over parts of Palestinian territories and its borders with Israel especially against Palestinian terrorist organizations who openly state their aim to destroy Israel.

The "sniping of peaceful protesters" is yet another disingenuous Islamist talking point embraced by mainstream U.S. media outlets. The vast majority of Palestinians killed during violent protests are operatives of Hamas and other terrorist organizations. This has been repeatedly confirmed by senior Hamas leaders. For years, Hamas has orchestrated near-weekly violent riots, staged lethal attacks at the border, while encouraging Palestinians to infiltrate into Israel to attack civilians. Other rioters throw pipe bombs and IED's over the Gaza fence and deploy Molotov kites, sparking fires in Israeli fields near the border causing massive damage.

Meanwhile, Sarsour is silent when it comes to condemning Hamas or Fatah for the brutal suppression of Palestinian demonstrators within their borders who are routinely repressed and tortured by their governing authorities.

In Sarsour's world, "There has never been a person that I've come across in Palestine that has said to me, Linda, the only way for Palestinians to live in peace is to destroy the state of Israel. It never happened. No one has ever said that, because that's not what the Palestinian people want."

This assertion is not only misleading, it is categorically false, given overwhelming evidence that Palestinian society and organizations systematically incite violence against Israel and glorify Palestinian terrorists who kill Jews. Hamas, an organization that exists to bring about Israeli's annihilation, continues to rule Gaza and remains disturbingly popular.

Palestinians convicted of attacking Israelis receive massive stipends from the Palestinian Authority, totaling tens of millions of dollars. The amount paid to terrorists depends on the length of sentence or on the number of Jews killed, which has become a source of pride in Palestine. Peaceful coexistence with Israel is rejected as traitorous.

Sarsour repeatedly denied that representatives Rashida Tlaib and Ilhan Omar are anti-Semitic: "I know them both very personally and they get really hurt by these false accusations of anti-Semitism." Really? But both Tlaib and Omar have a record of making anti-Semitic statements, including peddling accusations of dual loyalties by American supporters of Israel.

"So when you are supporting an anti-BDS legislation, which is anti the Constitution of the United States of America, which you swore to uphold as a member of the US Senate, then Rashida has every right to question, who are you for?" Sarsour said. But this argument precisely feeds into anti-Semitic tropes of dual loyalty. For American Islamists, one cannot be a patriotic American while opposing sanctions against the Jewish state – one of the United States' most staunch allies.

Towards the end of the interview, Sarsour had the audacity to defend anti-Semitic politicians like British Labour leader Jeremy Corbyn. She absolved him of responsibility for rampant anti-Semitism he has encouraged within Labour since he assumed leadership. For years, Corbyn has praised Palestinian terrorists and supported the worst forms of anti-Semitism.

Sarsour still claims she is "committed to calling out anti-Semitism in the progressive left. And I've done it many times before."

No, Linda, you are the poster-woman of leftist anti-Semitism.