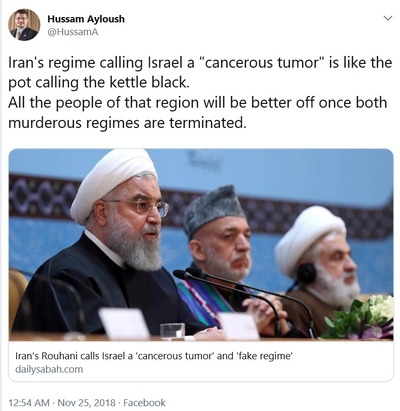 Hussam Ayloush, a senior Council on American-Islamic Relations (CAIR) official, in a tweet on Sunday called for the Jewish state to be "terminated."

"Iran's regime calling Israel a 'cancerous tumor' is like the pot calling the kettle black. All the people of that region will be better off once both murderous regimes are terminated," Ayloush wrote.

Based on this tweet, one might assume Ayloush has an equal disdain for the Islamic Republic of Iran and Israel. However, whereas Ayloush would like to see regime change in Iran, he has a history of describing Israel in ways that echo Iranian rhetoric calling for its destruction.

He has referred to Israelis as "zionazis" and repeatedly equated the Israel Defense Forces (IDF) with ISIS terrorists.

"You know how many hundreds of Jewish American kids are recruited to join the Israeli occupation army? Hundreds. Every year. They leave their country, leave America, to go join with an army that is engaged, with no debate, in major violations of human rights, and maybe some would argue, and I'm one of them, war crimes," Ayloush said in May, adding that "no one has ever established a CVE program to see, why would normal Jewish American kids leave their home and join to be part of an army committing war crimes."

It's also anti-Semitic, according to the U.S. State Department's definition established in 2010. Demonizing Israel by "[d]rawing comparisons of contemporary Israeli policy to that of the Nazis" and "denying Israel the right to exist" are among the behaviors which constitute anti-Semitism.

Now Ayloush is trying to equate Israel with the Islamic Republic of Iran – the world's foremost state sponsor of terrorism worldwide which continues to actively plot attacks throughout the West.

He didn't call for Israeli Prime Minister Benjamin Netanyahu to be voted out and replaced by someone less hawkish in the conflict with Palestinians. He called for it to be terminated.

Ayloush runs CAIR's Los Angeles chapter and remains politically influential despite his radical views on the Middle East conflict. According to his Facebook profile, he remains a delegate in California's Democratic Party.

As we've noted previously, Ayloush's willingness to make outrageous comparisons likening Israel to the world's greatest terrorists, he bristles at the very question of whether Hamas is a terrorist organization. In a 2013 exchange captured on video, Ayloush angrily dismissed the question as "not acceptable," and "proves that you have nothing but bigotry in you."

It's difficult to imagine a parallel circumstance in which a prominent public figure calls for the "termination" of a foreign state and manages to retain his influence. Ayloush isn't criticizing a specific policy. He wants an existing nation to disappear.