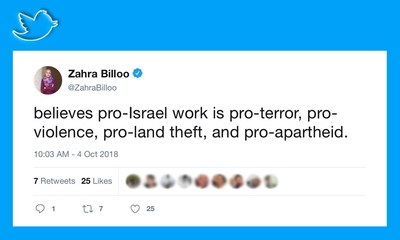 Billoo's views, however, do not sound like she is someone who promotes societal cohesion or inclusivity.

Originally rescinding Billoo's award in June, PACT caved to pressure from religious and civic figures and reversed its decision.

But before agreeing to accept the award, Billoo said that she forced PACT to "acknowledge that the Palestinian struggle is inextricably connected to our collective liberation."

It's ironic that Billoo received public recognition as a "community builder" given her history of propagating radical Islamist and anti-Semitic remarks.

Earlier this month, Billoo openly stoked division by drawing a line in the sand between who is a legitimate Muslim leader and who is not, in her opinion.

"I'm really cautious of who I call a Muslim leader," Billoo said at a gathering with the Ecumenical Peace Institute, warning others to be aware "as you see countries in the Middle East, and even Muslim activists in the United States, take problematic positions supporting the state of Israel or opposing the Boycott, Divestment and Sanctions movement."

Advocating for sanctions and boycotts targeting Israel, while avoiding similar calls against other states who violate human rights on a far larger scale, is a double standard that amounts to anti-Semitism.

This sentiment is expected of Billoo who, like other U.S. Islamist figures, consistently opposes any type of engagement or interfaith dialogue with organizations that maintain ties to Israel.

"I definitely don't agree with the brother that's willing to participate in any Department of Homeland Security program, and don't agree with elected officials or with Muslims who want to go on Zionist-funded trips to apartheid Israel and say that that's going to build interfaith relationships."

Billoo rarely refers to Israel without adding the word "apartheid" in conjunction. That is Billoo's way of systematically delegitimizing the Jewish state into an evil caricature, despite Israel being the only liberal democracy in the Middle East. 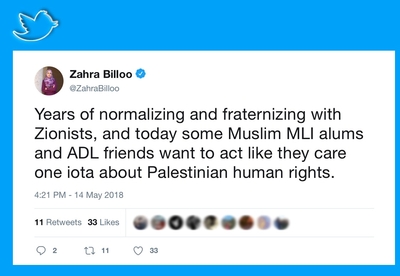 On Monday and Tuesday, Hamas and other Gaza-based terrorist groups fired over 400 rockets into Israeli communities, killing one person and wounding at least dozens of others.

But no matter what Israel or the U.S. governments do to defend their populations, U.S.-based Islamists – like Billoo – will defend the terrorists.

In the past, she has repeatedly equated Americans in the Israeli army with ISIS terrorists and accused the FBI of fabricating terrorist threats for public consumption.

"Both ISIS and the IDF are violent, immoral gangs. They're literally baby killers," Billoo wrote in May.

She has also urged Muslims to "build a wall of resistance" between themselves and law enforcement, discouraging contact with the FBI.

Perhaps Billoo is a "community builder" – just as long as "Zionists" or U.S. law enforcement personnel are not involved in her sense of community. By singling out supporters of the Jewish state, Billoo is engaging in bigotry and is actively working to breakdown interfaith and community relationships. By discouraging contact with the FBI, Billoo is promoting hostility against law enforcement personnel that work to keep local communities safe.

Based on Billoo's divisive track record, she does not deserve public recognition for anything related to community bonds.