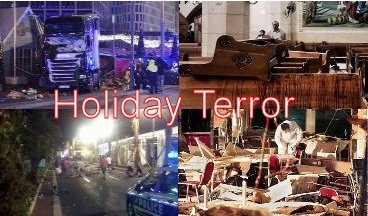 Nearly 50 people were murdered on Palm Sunday when Islamic State terrorists bombed two Coptic churches in an Easter celebration-nightmare. The next day, on the eve of the Jewish holiday of Passover, the Islamic State's Sinai affiliate launched rockets at Israel.

Just before Christmas, a terrorist claimed by the Islamic State rammed a truck into Berlin's crowded Christmas market, killing 12 people. And in Australia, a group of self-radicalized Islamists planned to attack St Paul's Cathedral. In 2011, Nigerian Islamists murdered nearly 40 Catholic worshipers in a Christmas Day attack.

Terrorists attack where and when they can. But they seem keenly aware that turning holidays into horror can carry greater shock and terror. In 2002, 30 Israeli civilians were massacred and 140 injured by a Hamas suicide bomber who blew himself up as they sat for the seder, the traditional Passover meal, at the Park Hotel in Netanya.

It isn't just terrorists who see advantages in striking during holidays. The 1973 Yom Kippur War may be the most famous example, when the armies of two Muslim-majority states, Egypt and Syria, attacked Israel on the most sacred day of the Jewish calendar. That war produced an estimated 20,000 deaths.

Christians and Jews aren't the only religious groups that have been targeted by Islamists during non-Muslim holy days. The Hindu festival of Diwali has also been attacked. In 2005, a series of bombs killed over 60 people and injured hundreds in Delhi; a Pakistan-based Islamist terrorist group, the Islamic Revolutionary Front, claimed responsibility. Last October, Indian police arrested an Islamist cell inspired by the Islamic State for planning an attack during Diwali.

Muslims are also victimized by Islamist attacks in increasing volume. A 2015 mosque bombing in Yemen killed 29 people during prayers for the Muslim holiday of Eid. Last July, also during Eid, three people were killed at a Bangladesh checkpoint when gunmen carrying bombs tried to attack the country's largest Eid gathering, which attracted an estimated 300,000 worshippers.

Last May, as the Muslim holy month of Ramadan approached, a spokesman for the Islamic State urged jihadists to "make it, with God's permission, a month of pain for infidels everywhere." Days later, as Ramadan celebrations stretched past midnight in central Baghdad, a minivan packed with explosives blew up and killed at least 143 people.

Holidays are often chosen because they are "optimal attack days," in terms of gathering large crowds into soft targets like houses of worship, religious markets, ceremonial gatherings, and parades. Last November, U.S. officials warned that the coming holiday season could mean "opportunities for violent extremists" to attack.

A terrorist attack on a holiday is also more likely to attract media attention. And because holidays draw tourists, well-timed attacks can amplify the economic damage that would be wrought by terror even on a non-holiday. After a spate of attacks toward the end of 2015, "about 10% of American travelers have canceled a trip ... eliminating a potential $8.2 billion in travel spending," reported MarketWatch.

But ISIS, al-Qaida and other Islamist terrorist groups believe they are waging a holy war above all else. Attacking infidels, be they Christians, Jews or Muslims of other sects, motivates jihadis more than anything else. "Those who targeted churches on holiday celebrations tend to be professional terrorist groups," Raymond Ibrahim, author of Crucified Again: Exposing Islam's New War on Christians, told the IPT. By contrast, "mob attacks happen either on a Friday, after an especially potent sermon, or whenever infidels need to be put in their place (e.g., a Christian accused of blasphemy, then the church in his village gets torched)."

In 2015, Islamic State warnings of future attacks against Christians noted that Christians were their "favorite prey" and no longer protected as "dhimmis," a reference to non-Muslims in Islam who may, in exchange for paying the jizya tax, receive some state protection.

Thus, within the larger context of a holy war, attacks on non-Muslim holy days can be viewed as part of the more general Islamist strategy of humiliation, forced submission to Islam, and the denial of any competing religion. Attacking on Diwali or Christmas or Yom Kippur is essentially declaring that such "infidel" holy days ought to be desecrated rather than respected. The symbolic message is akin to the one communicated by the two Islamists who entered a French cathedral and beheaded an octogenarian priest, Jacques Hamel, during mass services last July.

Attacking places of worship on holy days – when they are most used by and relevant to their congregations – is also a good way to undermine these religious institutions and their supporters. If Islamist terror makes churches the most vulnerable on the days when they are most crowded, how will those houses of worship attract enough followers to sustain themselves? And how will their congregants practice their faith? The Coptic Pope curbed some Easter celebrations in Egypt after the recent Palm Sunday blasts.

Such questions may help to explain why Christians, who have lived in the Middle East – the birthplace of Christianity – for millennia now constitute only about 3 percent of the region's population, down from 20 percent a century ago.

Indeed, the only non-Muslim country in the entire Middle East is also the safest place for non-Muslims in the region, including Christians, Druze, and Bahai. "Christians and other minorities in Israel prosper and grow," says Shadi Khalloul, founder of the Israeli Aramaic Movement. "[W]hile in other countries in the Middle East, as well as in the Palestinian Authority, they suffer heavily from the Islamic movement and persecution – until forced to disappear."