Prey: Immigration, Islam and the Erosion of Women's Rights 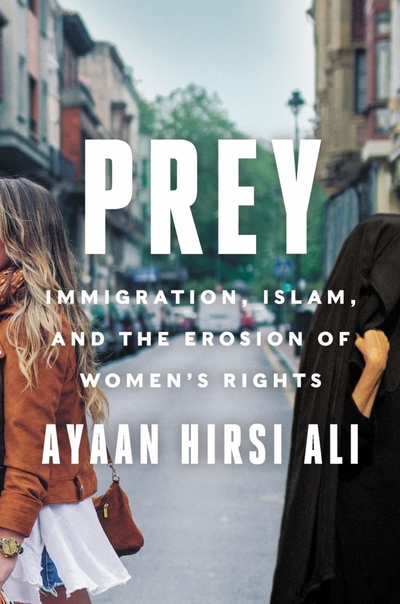 It had been a week full of headlines in the Netherlands. In one case, an immigrant from Morocco had brought his wife to see the doctor. When the physician reached to shake the woman's hand, her husband punched him in the face. "It's my culture," the man later explained to the police.

But the bigger story had been about Gul, a Turkish woman living in Zanstaad who escaped her abusive husband, running to a shelter for battered women. Several shelters and even more weeks later, her abuser tracked her down and shot her on the sidewalk, outside the shelter door. She died on the scene.

Furious after Gul's husband was arrested, his family threatened the other women at the shelter, as well as the employees. In response, the government evacuated the premises, while one Parliament member proposed providing other abused Muslim women a new identity and helping them escape the country – a sort of witness protection program for the victims.

And so a week later, when I met Ayaan Hirsi Ali at her favorite café in Amsterdam, she made no effort to contain her frustration and her fury. "That's what cultural relativism has brought," she said, her anger piercing every word. "You don't get the aggressor, you just evacuate. As if it's a war zone. I mean, more absurd than that, I can't imagine – they have to become refugees! The Dutch government is basically saying, 'I can't protect my own citizens.'"

At the time still a member of the Dutch Parliament, Hirsi Ali had already made a name for herself as an advocate for Muslim women living in the shadows – immigrants, mostly, forced to remain at home, subjected to the misogynistic traditions of their conservative Muslim families and husbands.

Nearly 20 years later, the situation is no better. In fact, it's gotten worse: sexual assault perpetrated by refugees from the Middle East and North Africa has skyrocketed across Europe, most famously during the attack on New Year's Eve in Cologne, Germany in 2016, when hundreds of women reported being groped, grabbed, intimidated or otherwise sexually violated in a massive crowd outside the city's train station. The vast majority of men involved were refugees and illegal immigrants from Syria and North Africa.

Now Hirsi Ali has channeled her frustration and her anger into a book she hopes will open the eyes of Western – especially European – leaders to the threats these migrants pose to the fundamental liberties and values of our culture. For too long, she argues, politicians have averted their eyes to these threats in the interest of "multiculturalism" and "tolerance." Too many allowances have been made for consideration of "cultural differences" within conservative Muslim immigrant communities, people who have brought the values of their homelands with them to the West, rejecting the cultural values of the lands where they have come (presumably) to build a better future. And most of those values have to do with women.

Prey: Immigration, Islam, and the Erosion of Women's Rights shoots into the center of the issue, refusing to look away, refusing – as Hirsi Ali has always done – to remain silent in the face of injustice and the erosion of Enlightenment values. Her targets: to reclaim the rights and progress Western women have made over the past 60 years; to squelch the arguments of far-left activists whose identity politics, she says, makes addressing these issues "unfashionable" at a time when "we are supposed to operate within a partly historical matrix of victimhood"; and to combat the rising tide of white supremacists and right wing extremists who use "evidence of sexual misconduct by some Muslim immigrants... as a powerful tool to demonize all Muslim immigrants."

As she notes, "If we bring this issue out of the taboo zone, discussion will cease to be monopolized by those elements." What's more, "frank discussion also challenges the Islamists, who recognize the problem but propose a remedy that would set back all women."

Hence Prey, according to its author, is largely about a "cultural problem that migrants bring from Muslim majority countries to Europe" – and about the failure of Europe's response:

In the first half of 2020, the authorities in many European countries bungled the handling of the pandemic in much the same way they mishandled the migration crisis discussed in Prey. In the case of coronavirus, many governments were in denial at first; they wasted precious time that could have been used to contain the contagion. In much the same way, governments ignored (and continue to ignore) the lack of assimilation of migrants coming into Europe and the fact that women were losing their safety bit by bit. On coronavirus, many policy makers avoided taking responsibility and instead told us to "listen to the experts"; this was exactly what they did in the face of a wave of crimes against women after 2015.

Though she doesn't specifically name it, that "cultural problem" is rooted in the honor culture that defines Arab and most Muslim societies. In honor cultures, manliness and honor are inseparable: and manliness is best exemplified by power. Power, in turn, is something taken, usually with violence; indeed, in honor cultures, violence is manliness is honor; and similarly, power over women and sexual prowess are the embodiment of manliness (or, if you will, of hyper masculinity). As Hirsi Ali writes, "in the countries where asylum seekers are coming from, violence is often the principal form of conflict resolution. Patriarchal violence is taken for granted in the Muslim world. Children can expect beatings by their parents, especially their fathers, and also by teachers, uncles, older siblings, and stronger children." As one Afghan man interviewed for the book told her, "Fear is seen as a sign of respect in our countries."

Not surprising, then, that sharia courts continue to operate in several European states; that the European parliament estimates that at least one honor killing takes place every month in each European country; and that for decades – in fact, until the Somali-born Hirsi Ali forced the subject into the spotlight in the early 2000s – European leaders largely ignored those killings, ascribing them to "cultural" or "religious" traditions they had no desire, in the post-WWII era, to condemn. Meantime, she notes, "feminists steeped in multicultural ideology excuse the inequality imposed upon women across the Muslim world, including in the parallel societies of Europe. They pointedly 'respect' this misogynistic culture rather than agitating for it to evolve. Western feminists have effectively relegated their Muslim sisters to the past. They are sleepwalking as their own rights begin to be eroded... Progress is not only inevitable; in this case, it is reversing."

The result, as Hirsi Ali shows, manifests not as simply a threat to women's freedoms, but to the security and stability of Western culture in itself. Researcher Valerie Hudson, the George H.W. Bush Professor of International Affairs at Texas A&M University and author of Sex and World Peace, has shown a mutual interconnection between the oppression of women and unstable nation-states: where women are oppressed, states are more violent, militaristic, and unstable. Accordingly, violent and unstable states – precisely the places refugees and asylum-seekers flee from – tend to oppress women. Consequently, the willingness of Western leaders to "tolerate" or – at best – minimize the damage caused by the misogynistic cultures of the countries driving so many refugees and asylum seekers to Europe, risks recreating exactly those kinds of cultures here at home. In the process, they put not only Europe's women, but Europe's entire security, in peril.

But there is a way out. A book that begins with statistical analysis and surveys, continues with discussions of the impact of that analysis and its significance, ends with recommendations for a better future, one that would improve lives as much for Muslim immigrants as it would for their European hosts. Above all, she writes, "Western countries will have to invest resources to address the security and economic issues in the countries from which migrants are coming, or millions more will risk their lives crossing the Mediterranean and the English Channel." Other measures: stronger border enforcement within Europe, and demanding that immigrants "adopt the values of the country that has given them sanctuary." And meaning it.

Hirsi Ali's critics will be surprised by this book. Those who have accused her of Islamophobia and populism will need to rethink their arguments in the face of her outright condemnation of populism and white supremacy, and her repeated acknowledgement that most Muslim immigrants come to the West in order to engage in, benefit from, and live the freedoms of Western culture. And the depth and extent of the research on which Prey's arguments are based will make it difficult for them to condemn her analyses – though many have already tried, and others surely will.

Still, the author misses one crucial point – one that she no doubt would agree with, but fails to make explicitly: that as failure to integrate and assimilate Muslim migrants incites a rise in white supremacy, it will be women again who suffer the consequences. The white supremacist movement, much like radical Islam, embraces a patriarchal, hypermacho culture that blames much of the "degradation" of the West on the emancipation of women, and instead seeks to keep women at home, having babies and satisfying the carnal lusts of their men. In so doing, the misogyny of Islamists and of white supremacists will feed off one another, furthering the instability and security risks to the very democratic culture we ourselves aim to inspire around the globe.

But for those who have known Ayaan Hirsi Ali, worked with her, followed her, read her other books and essays, however, Prey serves as a vital reminder of her work, and why it matters. True, those who are accustomed to her writing will, as I did, miss the poetry of her narrative, the voice we've come to know. But it remains a voice that must be amplified, and heard.

IPT Senior Fellow Abigail R. Esman is a freelance writer based in New York and the Netherlands. She is the author of Radical State: How Jihad Is Winning Over Democracy in the West( Praeger, 2010). Her new book, Rage: Narcissism, Patriarchy, and the Culture of Terrorism, was published by Potomac Books in October 2020. Follow her at @radicalstates.