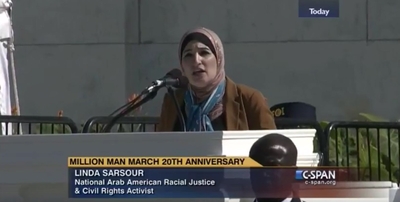 So says Linda Sarsour, perhaps the most visible Muslim political advocate in the United States – a co-chair of the national Women's March and a campaign surrogate for politicians including Bernie Sanders and Alexandria Ocasio-Cortez.

A program sponsored by the Anti-Defamation League (ADL) that takes American police officials to Israel for a week-long seminar is fueling police brutality, Sarsour said earlier this month at the Islamic Society of North America (ISNA)'s annual convention.

The ADL, she said in response to a question, "has been a purveyor of Islamophobia against our community" but still enjoys a positive reputation.

ADL officials "positioned themselves as somehow being part of the progressive movement," she said. "But what they do is, I'll give you an example of something that they do, if you are part of a criminal justice reform movement, if you believe in the idea of ending police brutality and the misconduct of law enforcement officers across the country, then you do not support an organization that takes police officers from America, funds their trips, takes them to Israel so they can be trained by the Israeli police and military, and then they come back here and do what? Stop and frisk, killing unarmed black people across the country."

"It's not only anti-Semitic, it's bullshit," Jacobs said. "She's lying to a bunch of gullible, hurt people. She's like a horrible guru that just lies because she has her own agenda."

In softer language, Austin, Texas Assistant Police Chief Chris McIlvain said his experience on the 2015 ADL-sponsored seminar in Israel was "not even remotely" close to what Sarsour described.

There was no tactical training and no discussion of forceful or coercive techniques, he said. Police departments must maintain "a state of readiness" for all kinds of threats, from mass shootings to terrorist attacks. Israel has experience with these challenges that can be helpful to police departments here.

"The ADL is a good partner of law enforcement combating hate crimes of all types," McIlvain said. "The idea is not to divert hate from one group to another, it's to eliminate it." 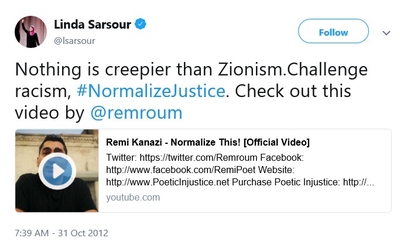 Sarsour didn't offer any information to substantiate her claim. She already has drawn accusations of anti-Semitism for her refusal to condemn Nation of Islam leader Louis Farrakhan's Jew-hating sermons and for her opposition – not just to Israeli policies – but to the very principle that led to the country's 1948 independence. "Nothing is creepier than Zionism," she famously wrote on Twitter. Zionists who failed to meet her threshold for sufficient support for Palestinians could not be feminists, she said.

"I am an unapologetic pro-BDS, one-state solution supporting resistance supporter here in the U.S.," she told her ISNA audience Sept. 2.

BDS is the campaign to coerce corporations and universities into boycotting or divesting their investments in Israel. It is seen as anti-Semitic for demonizing and singling out the world's only Jewish state and trying to isolate it economically, academically and in the arts. Many of its advocates ultimately seek Israel's elimination. A one-state solution that Sarsour advocates would accomplish just that, upending Israeli demographics and ultimately ending its status as a Jewish homeland.

To garner more support for that goal, Palestinian advocates have turned to "intersectional" politics, an alliance of aggrieved interest groups. Courting African Americans has been a staple of that intersectional effort, with Palestinian supporters arguing that any injustices against African Americans at the hands of law enforcement are somehow akin to Palestinians fighting Israel. Liberation for both black people and Palestinians is "bound up," Sarsour said during the 2015 Million Man March organized by Louis Farrakhan.

Attacking the ADL program offers a way for activists like Sarsour to build intersectional alliances by linking Israel to "militarizing" American police, holding the ADL and Israel somehow responsible for police abuses in the United States. Sarsour took it a step further. If not for Israeli training made possible by the country's best-known Jewish organization, police wouldn't be shooting unarmed black people.

It is a talking point pushed in 2016 by two officials at the Council on American-Islamic Relations (CAIR).

Dawud Walid, head of CAIR's Michigan chapter, brought it up at an American Muslims for Palestine (AMP) convention outside Chicago:

That sounds like a claim that Ferguson street cops received hands-on training that made them more prone to shoot. In fact, Ferguson's then-Police Chief Tim Fitch attended the ADL program three years before Brown's death. No investigation has connected Fitch's experience to the Brown shooting. Investigations did contradict much of the original narrative about the shooting, including video and blood evidence which showed Brown fought with police officer Darren Wilson. Brown's autopsy, the Washington Post reported, found that he "may not have had his hands raised when he was fatally shot, as has been the contention of protesters who have demanded Wilson's arrest."

A Justice Department Civil Rights Division investigation in 2015 found that an "emphasis on revenue generation" and racial bias led Ferguson police to routinely violate the 1st, 4th and 14th amendments "in stopping people without reasonable suspicion, arresting them without probable cause, and using unreasonable force." Many of the abuses date back to 2007. Neither Israel nor the ADL are mentioned in the 105-page report.

A year after the investigation ended, Abdelaziz and Walid still cast Israel as complicit in Brown's death.

"When I am working in solidarity with the Black Lives Matter movement, we now have a space to share stories and talk about how Palestinians have been powerless victims to military brutality and a lack of justice and accountability for far too long as well. There's a recognition when you say Black Lives Matter in the United States you are also saying that Palestinian lives matter," Abdelaziz said, echoing Sarsour's Million Man March speech. "You are saying that the same forces that are oppressing Palestinians unjustly in Israel-Palestine are the same forces and the same evils that are extra-judicially murdering black men in the United States."

Despite years of rhetoric, no one has tied a police officer involved in a questionable shooting to the ADL's Israel seminar. The program began in 2003 and more than 200 police officials have participated.

The ADL declined to comment for this story. But in 2015, Deputy National Director Kenneth Jacobson dismissed the argument as "[t]he latest strategy being used by those who make a career of assaulting the good name of the state of Israel," adding that there is "no rational connection between the challenge of racism in America and the situation facing the Palestinians." Palestinians, he noted, have repeatedly rejected peace offers to create a state – one that agrees to exist peacefully alongside Israel.

Taking that reasoning a step further, there is no African-American movement that controls territory and pursues an obsessive campaign to annihilate the United States like Hamas in Gaza. Even the Palestinian Authority incites violence against Israeli civilians and rewards people who succeed in murdering them.

The baseless claims against the ADL program and similar Israeli training are echoed by the anti-Israel group Jewish Voice for Peace. It set up a website, Deadly Exchange, devoted to smearing American police training involving Israelis, including the ADL's counter-terrorism seminar.

Again, that's "not even remotely" close to what McIlvain said he experienced. While Deadly Exchange cites alleged policies and tactics it finds objectionable, it offers no example of an American being harmed as a result.

The JVP campaign has enjoyed at least one success despite that lack of evidence, with Durham, N.C.'s city council voting in April to prohibit any city police official from participating in any Israeli training program. No Durham official had, and officials said they had no plans to do so.