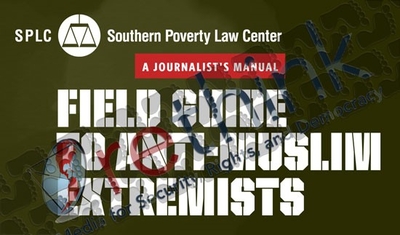 It's always been curious why Maajid Nawaz, a Muslim, wound up in the Southern Poverty Law Center's (SPLC) controversial journalist's guide listing "anti-Muslim extremists." Nawaz is a former extremist who founded the U.K-based Quilliam Foundation, a think tank that counters Islamic radicalism.

The answer may have been hiding in plain sight.

The report, which was removed from the SPLC's website in April, noted that it was compiled with input from ReThink Media, the Center for New Community and MediaMatters. Now that collaboration has cost the SPLC nearly $3.4 million in a legal settlement and that included multiple apologies to Nawaz.

"Since we published the Field Guide, we have taken the time to do more research and have consulted with human rights advocates we respect. We've found that Mr. Nawaz and Quilliam have made valuable and important contributions to public discourse, including by promoting pluralism and condemning both anti-Muslim bigotry and Islamist extremism," SPLC President Richard Cohen said in a video statement.

SPLC attacked Nawaz in the guide for saying there was little difference dividing non-violent jihadists from the violent ones ideologically, except that "they disagree only on tactics." Islamists share a common desire to build a global caliphate, but the non-violent ones tend to seek that change through the ballot.

In accepting the SPLC's apology, Nawaz asked it to oppose all forms of extremism and join Quilliam in fighting Islamic extremism.

"This should be an instructive moment for all of us. Too much, and for too long, the left – many on the left – have been trying to shut down any debate or critique or criticism around Islam, especially by Muslims within Muslim communities," Nawaz said.

ReThink's contributions to the discredited guide are unknown. Neither ReThink nor the SPLC responded to requests for comment for this story.

When the guide was written, ReThink Media employed a former leader with the Council on American-Islamic Relations (CAIR) who has a history of radicalism. And since then, ReThink hired Corey Saylor, CAIR's former national legislative affairs director.

CAIR and Nawaz hold diametrically opposing viewpoints on a number of key issues. While CAIR has tried to minimize the threat of Islamic radicalization, and its officials routinely accuse law enforcement of setting up innocent Muslims, Nawaz presents his own life story as an example of its lure.

In addition, Nawaz advocates for reform within Islam. CAIR has largely ignored the Muslim Reform Movement, a fledgling group of North American Muslims who aspire to spur "an Islamic renewal [which] must defeat the ideology of Islamism, or politicized Islam, which seeks to create Islamic states, as well as an Islamic caliphate."

And Nawaz does not hate Israel, publicly condemning Hamas and Hizballah, something CAIR officials seem to avoid at all costs, often angrily.

Nawaz also offers the public a different image of a Western Muslim, in contrast to CAIR's mostly conservative Sunni leadership.

If that didn't contribute to Nawaz's smearing, CAIR likely was not upset to see him included in the SPLC report. CAIR's Florida chapter still has a copy of the report posted on its website even though the SPLC has taken it down, apologized for its content and agreed to pay Nawaz and Quilliam nearly $3.4 million

Zainab Chaudary is a former civil rights coordinator for CAIR's New Jersey chapter who was part of ReThink Media's Security and Rights Collaborative in 2016 when Nawaz was added to the SPLC's list. Chaudary's LinkedIn profile says she consults with the SPLC and MediaMatters in her role as a ReThink senior media associate.

ReThink Media, a self-described "part PR firm, part advocacy organization," acts as a communications hub to help organizations on the left hone their messages. It also is linked to a funding consortium created by George Soros' Open Society Foundations (OSF) to combat anti-Muslim sentiment and undo many of the Bush administration's counter-terrorism policies. Combating "Islamophobia" was a key objective for OSF's board between 2015 and 2018, records show.

Chaudary served as an editor-in-chief of a Rutgers University Muslim student newsletter called Nasihah. Following the 9/11 attacks, Nasihah ran a column defending the Taliban's decision not to hand over Osama bin Laden.

"I don't blame the Taliban at all for keeping Osama because, as they say, no proof has been presented against him," wrote Arif Hussain. "If America is so sure that he is involved, what's stopping them from coming out with the proof?? Or is it that there is no proof against him?? It seems that Osama has become a scapegoat for every terrorist action anywhere in the world. They just want to get rid of him, regardless of whether he is responsible or not."

The U.S. military released a video in December 2001 – at least a month before this was published – showing bin Laden discussing his advanced knowledge of the attacks and his expectations for damage.

A letter to the editor in the same issue said that even though a "proper Islamic state" capable of declaring "jihad against the evildoers" didn't exist, Muslims should protect themselves against "evil oppressors" and prepare for the "ultimate battle that Islam must fight."

"How do you quantify what causes someone to become radicalized? And how do you separate that out from normal teenage behavior? So these kids are finding themselves under scrutiny where they can't speak out. They can't be politically active or engaged or activists even because they're under suspicion of being radicalized," Chaudary said in a September 2016 Huffington Post interview.

She also called for the end of CVE programs in 2016, saying there wasn't a single common profile for terrorists, and "we can't deal through the lens of law enforcement."

In addition to working with SPLC, Chaudary served on a 2015 panel that advised CAIR and the University of California, Berkeley's Center for Race and Gender for its report Confronting Fear: Islamophobia and its Impact in the United States. That report targeted the Investigative Project on Terrorism among others.

ReThink Media deepened its CAIR connection in December, when it added Saylor as managing director of the firm's Security and Rights Collaborative. Saylor appeared last month at a "Challenging Islamophobia" conference sponsored by CAIR's Minnesota chapter. There, he complained that the Justice Department and other federal agencies are more likely to issue a press release about "an incident" when a perpetrator is perceived to be Muslim.

It's not clear on what Saylor based this claim. But the Justice Department issued two press releases about white supremacist activities that same week. One announced a guilty plea by a white supremacist who threatened two U.S. senators. A second release announced the arrest of 57 white supremacist gang members for conspiring to commit kidnapping and drug trafficking. A month earlier, the DOJ touted the conviction of three white Kansas men who plotted to blow up an apartment complex with predominantly Somali Muslim tenants. Officials credited "a confidential source ... for thwarting the attack and saving the lives of innocent victims."

Saylor also has criticized FBI surveillance. FBI recruitment of informants in the Muslim community "impedes First Amendment-protected conversation," he told the Indypendent, a progressive New York outlet, last year. "So people are afraid to have an innocent conversation about politics, because they might say something wrong."

CVE outreach programs make American Muslims worry that government friendliness toward them is a ploy, he said in 2013. "That's because too often in the past you've had this hand reached out in friendship while the other is behind their back with handcuffs in it."

Saylor won't condemn Islamist terrorist organizations by name, other than ISIS or al-Qaida.

Pressed to condemn Hamas and Hizballah by name in a 2008 Fox News interview, Saylor would only say "CAIR condemns terrorist acts, whoever commits them, wherever they commit them, whenever they commit them." He also minimized the significance of a Muslim Brotherhood-created Hamas-support network in the United States called the Palestine Committee. It merely was "a group that existed in the early 1990s that seemed to have strengthening pro-Palestinian work at its core," he said. Internal committee records seized by the FBI told a dramatically different story. The Palestine Committee, of which CAIR was a member, was created to help Hamas "with what it needs of media, money, men and all of that."

In addition to its work on the discredited SPLC report, ReThink Media compiled lists of go-to sources on Muslim issues for journalists looking for reaction quotes. Many of those recommended have radical views. A list assembled after President Trump announced his travel ban, for example, lists Chaudary as the ReThink Media contact person. It also created an online initiative called 8.5Million.org that lists many of the same people featured on the travel-ban source list as points of contact for reporters.

"You're a reporter on deadline. You need a quote or a source quickly, and he or she needs to be responsive, media-savvy, and an expert. You don't have time to cultivate new relationships or start from square one. Who do you call?" 8.5 Million.org asks. 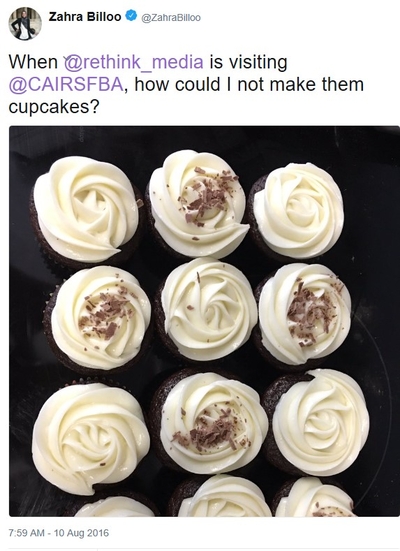 Another recommended source on ReThink Media's 8.5 Million.com list is CAIR Florida Executive Director Hassan Shibly. He falsely accused the FBI of shooting a Detroit imam after he had been "tied and bound."

His animus against the FBI also extends to sting operations aimed at nabbing potential jihadists before they can strike. He defended Sami Osmakac, who was convicted after a 2014 sting operation showed him trying to carry out a "second 9/11" in Tampa. "I'm concerned that the government's tactics turned him into a greater threat than he could have been on his own," Shibly said.

Farhana Khera from the legal group Muslim Advocates also appears on the 8.7 million.com site and on the travel ban contact list. She played a central role in convincing the Open Society Foundations to approve creating a program aimed at rolling back Bush-era U.S. national security programs, documents leaked by Russian intelligence-linked hackers calling themselves DC Leaks showed. OSF and its funding partners contributed more than $40 million to the grant program over the past decade.

Khera successfully convinced the Obama administration to expunge law-enforcement training materials she deemed as offensive to Muslims. She and Muslim Advocates also succeeded in getting the New York Police Department to end its mosque surveillance program in 2014 in conjunction with other OSF funded groups.

A 2007 memo Khera co-authored led to the creation the National Security and Human Rights Campaign (NSHRC). It became a collaborative effort funded by OSF, Atlantic Philanthropies and the Proteus Fund.

ReThink Media is inextricably tied to the NSHRC. Its founder and director Lynn Fahselt has served as senior adviser of the NSHRC's "Security & Rights Communications Collaborative" since 2008. Fahselt lobbied OSF's board to create "an online communications 'hub'" on behalf of ReThink Media in May 2008. ReThink Media suggested that this "hub" coordinate messaging and provide media training for groups under the NSHRC's umbrella.

In a world increasingly hostile to Muslims, "nonprofit organizations and advocacy groups need to be equipped with coordinated messages that will resonate with a broad public, a 2011 OSF document says.

It notes that ReThink Media specifically helped huddle and coordinate messaging with these advocacy groups before and after U.S. Rep. Peter King's 2011 congressional hearings on Islamic radicalization.

Considering Nawaz's belief in the reality of Muslim radicalization, his defense of Israel and discussion of the need for reform within Islam, avowed opponents like Chaudary or Saylor could have an ax to grind with him.

Working with ReThink Media and Chaudary may have cost SPLC dearly. It should ask itself whether treating CAIR or ReThink Media as credible partners or advisers was worth it.