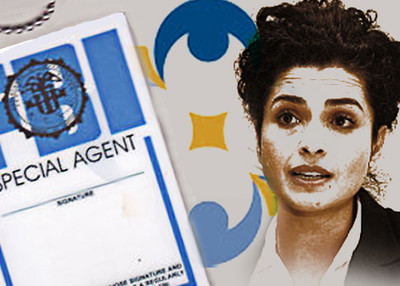 A recent "Know Your Rights" presentation by the Council on American-Islamic Relations' (CAIR) New York chapter set a new standard of fomenting fear and distrust among Muslim Americans toward law enforcement. Not only is the FBI out to get Muslims - and its agents are willing to lie and break the law to do it - an attorney and CAIR-New York board member told the audience, but so is the Israeli Mossad.

"It was discovered or published that a lot of the interviews that Muslims believed they were going into with the FBI, it turns out it wasn't with the FBI at all," Lamis Deek said in her presentation. "Guess who it was? Mossad, Israeli intelligence in New York and New Jersey."

A report did surface last fall about approaches to Muslim community leaders by possible Mossad operatives claiming to be in U.S. intelligence. The report indicates the agents sought cooperation and information, which the community leaders turned down and then reported the approaches to the FBI. In her remarks, Deek indicated the reports, based on anonymous sources, are proof that an Israeli conspiracy is playing out in America.

Deek spoke April 16 at the LaGuardia Airport Marriott as part of a CAIR leadership conference and chapter banquet. In addition to her work with CAIR, Deek actively supports a group trying to break the blockade on supplies to the Hamas government in Gaza. In that role, she has called Zionism "a racist and criminal ideology" and advocated a Palestinian state over land where Israel exists.

Even if they aren't secret Israelis, Muslims should never talk to FBI agents who might approach them, she said. "And if they come to your home," she advised, "sneak out."

That's because law enforcement officials will threaten, lie and even break the law to set up Muslims, she said.

"They will do anything, anything within their power and oftentimes beyond their power to get you to talk," Deek said. "They will threaten you. OK? I've had one case where they tried to blackmail my client, I mean blackmail, seriously blackmail; that's illegal. But they'll do it."

CAIR officials insist they support the FBI and have been helpful in investigations. The "Know Your Rights" seminars merely seek to reinforce every American's right to "constitutionally informed cooperation with law enforcement." That was their argument in January, after the group's San Francisco chapter posted a flyer on its website of a skulking agent roaming a neighborhood as doors slammed shut. "Build a Wall of Resistance," the flier said. "Don't Talk to the FBI."

CAIR's claim of supporting law enforcement is "ludicrous," said Steven Pomerantz, the FBI's assistant director for counterterrorism in the 1990s. The group has "a consistent, long history of being antagonistic toward law enforcement."

There may be individual, anecdotal examples of some of the problems Deek described, he said, but it's simply a scare tactic to take "the worst possible scenario of law enforcement in America and it's the sole way they portray it."

CAIR officials have routinely condemned FBI terrorism and terror financing investigations. Last fall, they denounced the FBI for searching the Chicago home of Hatem Abudayyeh, executive director of the Arab American Action Network. Ahmed Rehab, executive director of CAIR's Chicago chapter, called the investigation "a waste of taxpayer dollars," "a new low," and "an example of FBI overreach when it comes to activism or commentary on the (Middle East) conflict."

CAIR also routinely criticizes terror investigations of Muslims involving informants. After arrests in Maryland and Oregon involving men who thought they were about to bomb public places turned out to be FBI stings, Zahra Billoo, director of the San Francisco chapter that published the "wall of resistance" flier said the FBI "is creating these huge terror plots where they don't exist."

In contrast, CAIR praised the FBI following the arrests of a Christian Michigan militia group accused of plotting violence against law enforcement and may have targeted Muslims in an investigation aided by an undercover informant.

Walid devoted a year to trying to cast an FBI raid on a radical imam as an example of excessive force despite the fact that the imam refused to surrender and concealed a handgun as agents moved in to arrest him.

Yet, CAIR praised the FBI last week after it fatally shot a suspect in a 2010 pipe bomb attack on a mosque in Jacksonville, Fla. "While we regret that this individual will not face justice in a court of law, we thank the FBI for its year-long effort to bring the alleged perpetrator to justice," said Muneer Awad, executive director of CAIR's Oklahoma chapter (CAIR-OK).

In Deek's presentation, however, law enforcement was something to fear. "We're in an age where we are in fact all on the radar," she said, "we are in fact most of us under investigation."

In addition to serving on the CAIR-New York board, Deek also helped raise money for Viva Palestina, an aid convoy organized by former British MP George Galloway that has supported the Hamas leadership in Gaza. Galloway defiantly handed a bag of cash to Hamas officials in Gaza and VP convoys routinely are greeted by Hamas representatives in nations on the convoy's path.

During a July 2009 Brooklyn fundraiser, Deek endorsed the Hamas leadership and its goal of eliminating Israel. The convoy may carry aid, but its true objective is "not about charity," she said, "but in every way that we cut it, it is political."

"This movement was born from the unmasked horrors and ugliness of the Israeli Zionist regime and the principles upon which that Zionist regime was founded," she said.

Hamas refuses to recognize the state of Israel's existence and its charter calls for the state's destruction. In her remarks, Deek indicated no problem with that.

"In choosing Hamas, what they chose was one united Palestinian state on all of the 1948 territories from the north to the very south. That is what Palestinians chose. And in supporting Palestinian choice we are saying we support their right to liberation from violent colonialism."

In a separate speech at a Viva Palestina fundraiser last June, Deek reiterated her support for Palestinians who side with Hamas. "What they voted for was full resistance to Israel's occupation and one Palestinian state in all of Palestine from the '48 territories," she said.

Beyond warning her audience that Mossad agents might be lurking in the shadows, her seminar last month was more about the threats Muslims face from law enforcement. If someone hasn't been confronted yet, their turn is coming, she warned.

Immigrant communities, especially those from totalitarian states, are almost always among the most challenging for law enforcement agencies to build trust, said Pomerantz, now the director of counter terrorism programs at the Jewish Institute for National Security Affairs. The reality is that terrorist threats are emanating from within Muslim communities with increasing frequency, making cooperation all the more vital.