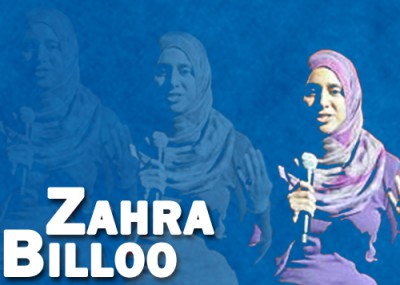 When you think about black civil rights groups in the United States, the National Association for the Advancement of Colored People (NAACP) likely springs to mind. There are numerous others working on issues like voting rights, criminal justice reform and more.

Few people would consider the Nation of Islam (NoI) on the same plane. While supporters credit it for working to improve safety and life in some black communities, it is better known for its unusual theology and the hate speech its leaders have uttered for decades.

She never mentioned the NoI by name during an address last weekend at the Islamic Circle of North America (ICNA)'s annual convention in Washington, D.C. But she made a point of criticizing the Southern Poverty Law Center (SPLC) because "they treat black civil rights groups the same as white nationalist groups. So, when they say 'there's been a rise in hatred,' look at their data twice. Because they want to treat black people, who assert their rights and say we should be treated better, who say that we demand better, that this country has a white supremacist history, the same as the KKK. So, be careful where you get your data from."

They also share ideology, with Jew-hatred leading the way.

The Nation of Islam's book, The Secret Relationship Between Blacks and Jews, "uses isolated examples of Jewish merchants' involvement in the purchase and ownership of slaves to place the onus of the slavery industry squarely on Jewish shoulders — a historical falsehood," the SPLC writes.

Over the years, Billoo has expressed interest in, if not outright support of, the Nation of Islam. She featured an NoI video on her blog in 2010. Seven months earlier, she felt compelled to share with her Twitter followers that she was "watching [Nation of Islam leader Louis] Farrakhan church speech, while at the gym."

Farrakhan speeches include references to "the Satanic" and "powerful Jew," who he sees as his enemy. Homosexuality, he said, began "among the Semitic people."

"Brother Barack," he said of President Obama, "under Jewish influence, trying to introduce same-sex marriage to African people. And the Africans say, 'We don't have nothing like that in our history."

The SPLC report goes into detail about the Nation of Islam and Farrakhan's hatred of gay people:

"He claims that homosexuality is the result of a chemical reaction and has convinced his followers that widespread homosexuality is part of a secret agenda being pushed by government scientist. Farrakhan's take is that by turning the black population gay, the government is trying to target and chemically castrate the black demographic. His belief is that food and water in black communities has been tampered with and it's the reason the sperm count in black men is currently falling." 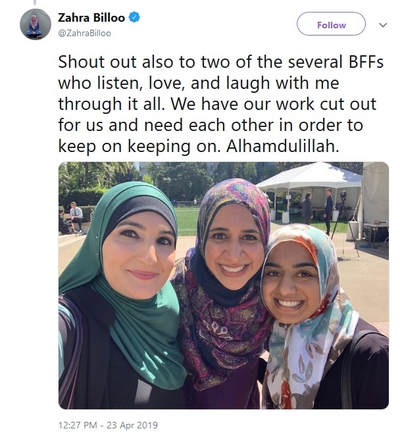 Billoo also is close with Islamist activist Linda Sarsour – whom she described as one of her "BFFs" in a Twitter post Tuesday.

Sarsour spoke at the 20th anniversary of the Nation's "Million Man March," and she has used the Nation for security, both personally and for the National Women's March. Sarsour sits on the Women's March board.

Women's March President Tamika Mallory has been aligned with Farrakhan for years. The inability of Mallory, Sarsour and the March itself to condemn his anti-Semitism and homophobia has badly damaged the March, leading several prominent sponsors to withdraw support and to a dramatic reduction in prominent sponsors and hurting attendance figures.

The SPLC has its own well-documented problems. Its top leaders recently resigned amid reports of sexual harassment and management that discriminated against black staffers. It agreed to pay $3.4 million last year to settle a defamation claim by Maajid Nawaz, a liberal Muslim reformist, after the SPLC erroneously included him in a guide of "Anti-Muslim Extremists."

When SPLC has erred, it has been in attempting to silence or discredit critics of Islamists and Islamic doctrine. Billoo's gripe – that it is unfair to black civil rights groups – seems to be a novel one.

Billoo even appears to be on her own among CAIR officials criticizing the SPLC. When the SPLC and the liberal group Media Matters issued the flawed "Anti-Muslim Extremists" guide in 2016, CAIR promoted it and a CAIR-linked consultant helped shape the report.

Less than a year ago, CAIR relied on SPLC information to demand that a National Security Council staffer to be removed. Just Monday, the two groups were among 127 groups asking political parties to make a repeal of the "Muslim ban" a part of their 2020 platforms.

The SPLC has been silent about hateful rhetoric pushed by some American Islamists – people like Billoo, who has repeatedly argued that ISIS terrorists and the Israeli military are morally equivalent and who flat out admits she does not think the Jewish state has a right to exist.

"[L]et's be real and call it apartheid Israel. Right? Because that is what it is," she told an American Muslims for Palestine conference in December. "And I am clear about I am not going to legitimize a country that I don't believe has a right to exist."

Billoo is no fan of the U.S. military, either. On several Memorial Day weekends, she has made a point of calling American troops war criminals. In 2014, she wrote that she rejected Columbus Day for the same reasons she rejects "Memorial Day, and all days dedicated to genocidal warmongers and their compliant foot soldiers."

In response to another person's comment two years later, Billoo asked why he thought "we should honor people who commit war crimes?" 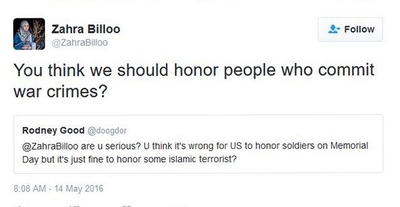 Despite her support for radicals and her consistently hateful views toward Zionists and all things Israel, Billoo somehow manages to enjoy broad community support.

The San Jose-based People Acting in Community Together (PACT), a "multi-faith community builders who challenge ourselves and all those with power to catalyze a movement to end racial and economic inequalities in Silicon Valley," honored Billoo with its Community Builder Award last November. This came after an initial decision to rescind the award.

CAIR California continues to receive generous financial support from area charities, including the Silicon Valley Community Foundation, despite the radical, often hateful speech from Billoo and some of her colleagues.

She wishes an existing country would disappear. She equates an army with ISIS terrorists and sees American soldiers as war criminals. Now, it appears, she also sees the Nation of Islam simply as a black civil rights group.