Chelsea's Got Talent – Flacking for the Islamophobia Industry 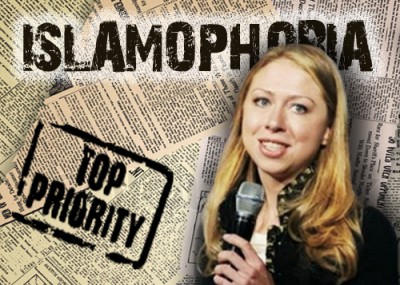 Word is that former First Daughter Chelsea Clinton's career as an NBC special correspondent isn't going terribly well. Labeled the "Dork Diva" by one media blog, network officials complain about everything from her refusal to discuss growing up in the Clinton White House to what they consider her lack of story production (just a handful since starting there last year). "What's she giving us?" one NBC executive asked skeptically.

Many people think Chelsea will follow in the footsteps of parents Bill and Hillary and run for office if her television career implodes, but I disagree.

After watching her recent performance moderating a New York Jewish Community Center forum on "Islamophobia," it's apparent that mere election to Congress or some other public office wouldn't be the best use of Chelsea's talent.

But if she decided on a career as a public-relations spokesman for the "Islamophobia Industry," her growth potential would be limitless. When I refer to the Industry, I mean organizations like the Council on American-Islamic Relations (CAIR), the Muslim Public Affairs Council (MPAC) and scores of like-minded groups that have proliferated across the United States during the past 20 years.

In general, these ideologues work to stifle legitimate debate by discrediting anyone who tries to point out the role of radical Islam in terrorism around the world or the radicalism in indoctrination centers and mosques like this, this, this and this as a bigot. The Industry also works to discredit successful prosecutions of jihadists seeking to attack the United States.

One weapon that has proven useful to the Industry is so-called "interfaith dialogue" involving Jewish and Islamic leaders. The Muslim participants tend to be Islamists, while their Jewish counterparts tend to be well-meaning "useful idiots" like Rabbi Marc Schneier, who has tried to establish a partnership with the Islamic Society of North America (ISNA), which is rooted in the Muslim Brotherhood. All too often, the result is a debacle in which the liberal Jews pine for dialogue while the Islamists stonewall and repeat anti-Semitic slanders.

And when Schneier (who heads a group called the Foundation for Ethnic Understanding, or FFEU) and Imam Muhammad Shamsi Ali joined Chelsea Clinton at the JCC March 14, things didn't go a whole lot better. Although it talks a lot about the virtues of diversity, the Islamophobia Industry portrays Muslim life in America in a bleak, one-dimensional way: as if Muslims here are little more than innocent victims of thuggish, bigoted non-Muslim gangs determined to punish them for 9/11 and subsequent jihadist actions.

I was taught a long time ago in Journalism 101 that the job of a journalist is to report on the news – not to act as an advocate or partisan. NBC's special correspondent views things a lot differently, declaring it is "the responsibility of the media to help ameliorate Islamophobia."

And that's precisely what Chelsea tried to do, tossing one softball after another to Ali and Schneier, parroting misinformation of her own and failing to question whoppers from the imam and the rabbi. Schneier, for example, bragged about his collaboration with hip-hop mogul Russell Simmons at FEU, but didn't get a single question from the moderator about Simmons' long history of sycophantic praise for Nation of Islam leader Louis Farrakhan, a notorious anti-Semite.

Nor did Chelsea seem well-informed about the Ground Zero Mosque controversy that heated up in 2010. She asked Schneier how "you think about trying to use the media to in many ways combat the media?" Chelsea suggested that Schneier might need to gear up for battle because "we saw such vitriolic statements covered widely in the media" with commentators using "terms that at best were insensitive to somewhere in the middle, or derogatory, and at worst were really dehumanizing." (She neglected to provide an example).

After Chelsea asked what the pair was doing to stop this, Schneier talked about his opposition to hearings on Islamist radicalization in the United States by House Homeland Security Committee Chairman Peter King, R-N.Y., and bragged about working with Islamist Rep. Keith Ellison, D-Minn., in an effort to win the release of kidnapped Israeli soldier Gilad Shalit. Schneier received thunderous applause from the audience when he described such work as an example of "the genuine authenticity that is needed for this Muslim/Jewish reconciliation."

Neither Schneier nor Chelsea Clinton bothered to mention that this "authenticity" came at a heavy price: the release of more than 1,000 imprisoned terrorist operatives, including planners of grisly attacks targeting civilians.

Just as the New York Times propagandized against "The Third Jihad" (a film spotlighting the threat posed by radical Islamist ideology), Chelsea falsely asserted that the film attacked "Muslim Americans" as a group as "somewhere on the continuum from deceitful to a terrorist in waiting." In fact, the documentary doesn't target Muslims as a group but does detail how CAIR was created after a secret 1993 meeting in Philadelphia involving members of the Muslim Brotherhood's Palestine Committee. The meeting was to generate support for the Hamas terror organization which runs Gaza today.

And Chelsea accepted without challenge Ali's disinformation about the word jihad. While he acknowledged it is a "scary word," Ali said people don't necessarily have to fear jihad, which can sometimes be a good thing. "We are doing a jihad. This is a jihad for peace, jihad for harmony, jihad for cooperation between people."

Chelsea appeared blissfully ignorant of Ali's links with Islamists and his criticism of the media for associating Muslims with jihadist terror.

The imam wasn't asked, for example, about his role as co-chairman of a 2006 Muslim Day Parade in which radical Imam Siraj Wahhaj, (a character witness for the "Blind Sheikh" at his terrorism trial) served as grand marshal.

After a Danish newspaper published cartoons depicting the Prophet Mohammad, Ali called the cartoons "psychological warfare against the Muslim world." At a protest outside the Danish consulate in New York City, Ali politely introduced speakers like Sara Flounders of the International Action Center, who called the cartoons "part of a war on all Muslim people" as well as conspiracy theorists who demanded that Washington end its support for "the racist occupying regime in Palestine."

Speaking at a 2008 conference sponsored by the Islamic Circle of North America (ICNA) and the Muslim American Society, Ali suggested that the media (rather than the jihadists) was to blame for connecting radical Islam and terror.

Like Ali, Schneier directs much of his fire at Americans who have the temerity to ask difficult questions about radicalism and its origins. One of the rabbi's favorite targets has been Rep. King, chairman of the House Homeland Security Committee, who Schneier depicts as a contributor to anti-Muslim bigotry for investigating radicalism.

At a March 2011 press conference, Schneier said he shares Ellison's concern "that these hearings will only exacerbate anti-Muslim bigotry and Islamophobia in our country."

Schneier's own forays into "interfaith dialogue" haven't always proven to be unvarnished successes. Shortly after Nidal Hasan, an Islamist serving as a military psychiatrist, massacred 13 people at Ford Hood, Tex., Schneier described in the Washington Post the successes of a "Weekend of Twinning of Synagogues and Mosques."

Writing at Frontpagemag.com, Ilya Feoktistov of Americans for Peace and Tolerance described how one such "twinning" turned disastrous. A Buffalo, N.Y.-area Jewish geriatrician and a Muslim dentist attended a medical conference in Damascus, Syria. During a break in the conference, the Muslim escorted his Jewish counterpart to a nearby mosque where he was introduced to an imam who sounded moderate – at least in his English-language writings and remarks.

After Jewish officials in Buffalo had the imam's Arabic-language writings translated into English, they learned that he was virulent anti-Semite and a political ally of Syrian dictator Bashar Assad.

The Islamist radicals were doing this (with Schneier's unwitting help) because such "disingenuous interfaith dialogue with Jewish leaders is also a strategic force-multiplier for extremists," Feoktistov wrote. "The rest of American society tends to look to Jews on the topic of extremist bigotry and intolerance as the proverbial canary in the coal mine. By embracing radical Islamists in an official interfaith relationship, Jewish leaders give them a ticket into American institutions."

Interfaith dialogue between Jews and Muslims "can be valuable. Yet dialogue is only productive when it occurs with partners who are honest about their true intentions," he added. "Instead of promoting peace and tolerance, legitimizing such entities through interfaith partnerships will only promote the hatred they preach when they think the Jews aren't paying attention."

One person who hadn't been paying attention was Chelsea, who clearly knew nothing about such politically inconvenient facts. "I think it's part of what is so impressive about the work that you do, that it's not only dialogue, that it is motivated by a shared purpose to build a shared community, to build a shared future of the promised land," she gushed to Schneier and Ali.

While the younger Clinton's gullibility allowed plenty of opportunity for the rabbi and the imam to peddle disinformation, it's striking to note what didn't get talked about: Muslim violence against non-Muslims and Muslims alike. The JCC audience wasn't burdened with information about Taliban savagery towards women; al-Qaida attacks targeting Iraqi civilians; al-Shabaab's predations against Somalis, or annoyances like terrorist attacks targeting Christian communities in Egypt and Iraq.

No, this was a Kumbaya moment, and Chelsea wasn't about to let the facts get in the way of the rabbi and the imam's propaganda shtick. It is simply disgraceful that the leadership of the New York JCC, who should know better, allowed themselves to be used as a conduit for such one-sided agitprop.