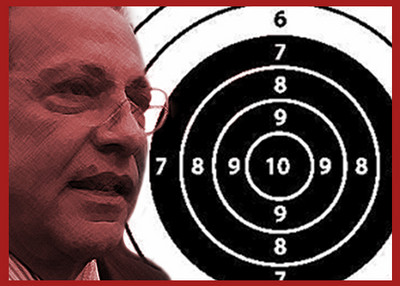 American-Muslim groups were swift to issue statements condemning New Year's Eve bombing attacks at a Nigerian army barracks and at a Coptic church in Alexandria, Egypt. But those same groups have been silent since Tuesday's assassination of a moderate Pakistani governor over a religious dispute as Islamists rejoice and hail the killer as a hero.

Punjab Governor Salman Taseer "is a blasphemer and this is the punishment for a blasphemer," confessed killer Malik Muntaz Qadri told Pakistani television.

The definition of blasphemy for Islam, therefore, has been extended to policy differences. Taseer's unforgiveable sin was declaring Pakistan's blasphemy law, calling for the execution of those who insult the religion or its prophet, a "black law." He did so while defending a Christian woman facing the death penalty for an alleged blasphemy.

"Those who support blasphemy of the Prophet are themselves indulging in blasphemy," the Jamaat-i-Ahl-i-Sunnat Pakistan said in a statement claiming to represent the views of more than 500 scholars.

The resulting adulation greeting Qadri – including the praise from the Jamaat, chanting supporters who threw rose petals at Qadri as he was led away by police, and even Facebook fan pages – is stoking fears of an open season on moderate Pakistani Muslims and secularists.

At a minimum, those who shared Taseer's view have been threatened with a similar fate and opposition to the blasphemy law will be muted.

Pakistan already had difficulty balancing the interests of fervently religious parties with more liberal, Western-oriented interests. Analysts fear Taseer's murder could be a tipping point in favor of the radicals, having significant, long term effects on Pakistan's political stability and its role as an important, if not always reliable, American ally in the war on terror.

A strong response from the international community is needed to bolster those "democratic and secular Pakistanis," the Quilliam paper said. That response apparently won't include national Muslim-American groups. None has issued a statement on the killing of those considered blasphemers or those who come to their defense.

That silence, however, may be more a sign of the tightrope such groups place themselves on by staking out a political agenda driven by religious ideology.

Unlike some Islamists who tried to pin the Coptic church attack on Jews, the American groups specifically criticized the terrorists' attempts to create hatred between Muslims and Christians.

Take the Islamic Circle of North America (ICNA). President Zahid Bukhari called the Coptic church bombing "an abhorrent act in the name of Islam by those who have no knowledge of the Islamic way of life. They do not represent the faith practiced by almost 1.5 billion people around the world."

So what of Taseer's getting gunned down in the street by a security official as other officers stood by? ICNA grew out of the Pakistani-based Jamaat-e-Islami (JeI) and continues to tout writings by founder Sayyid Abul 'Ala Maududi.

JeI leader Munawar Hasan blamed the victim, saying "Salman Taseer was himself responsible for his killing. Any Muslim worth the name could not tolerate blasphemy of the Prophet, as had been proved by this incident."

Sindh Asadhullah Bhutto, head of a JeI branch, told a news conference that Qadri "is a pious man and will go directly to heaven."

Bhutto then said that Aasia Bibi, the Catholic woman Taseer defended who is facing execution for alleged blasphemy "will suffer the same fate if the punishment awarded to her by the court for using derogatory remarks against Hazrat Mohammed Mustafa (PBUH) is not implemented."

According to a paper published Friday by Quilliam co-founder Ed Husain at the Council on Foreign Relations, the trouble began last summer when Bibi offered water to some farmhands. Her offer was refused because she is not a Muslim and, in anger, she said something insulting about the Prophet Muhammad.

"In the eyes of the religious masses in Pakistan, stirred by clerics, Taseer was not viewed as the governor of Punjab coming to the aid of a woman from a religious minority community, who, whatever her alleged crime, did not deserve to be killed by the state or the mob," Husain wrote. "Instead, he was seen as a traitor. In Urdu media outlets, mosque sermons and in mass rallies, Asiya Bibi's case became a national symbol of defiance and asserting Muslim supremacy over 'the other.' Christianity symbolized the West, the U.S. drone attacks, and Taseer was part of the English-speaking elite who were in cahoots with 'the enemy.'"

American Muslim groups which advocate interfaith dialogue can benefit from taking a stand for Taseer and Bibi.

The Council on American-Islamic Relations (CAIR) called the New Year's Eve bombings "cowardly" attacks meant "to harm long-term relations between Muslims and Christians." But its officials have endorsed blasphemy laws as recently as 2006.

During a news conference in the wake of the riots protesting the publication of cartoons depicting the Prophet Muhammad, then-CAIR Chairman Parvez Ahmed said Muslim outrage about the cartoons was justified, but that "Violence is not justified. Peaceful protest is justified. Harmful, destructive behavior of properties is not justified."

Still, he indicated that expanding hate-crime laws to cover speech might not be enough. Policy makers should "even contemplate about passing blasphemy laws," he said, citing icons including the Quran and the Prophet Muhammad which have been ridiculed. "So governments, legislatures, international bodies … must contemplate about what are the ways in which an anti-blasphemy law can be passed that can protect the right to exercise freedom of religion."

CAIR officials declined an invitation to appear on the "O'Reilly Factor" last month to discuss the Bibi case.

Those officials normally do not hesitate to weigh in on foreign affairs when it suits them, condemning burka bans in France and Tunisia, and issuing almost daily statements Israel's 2009-10 fight against Hamas in Gaza. But the pattern of selective outrage is well-established. The 2004 murder of Dutch filmmaker Theo Van Gogh after he produced a short film, "Submission," which was critical of Islam's treatment of women, drew no condemnation. The same goes for threats that have followed Van Gogh's partner in that project, Aayan Hirsi Ali.

When CAIR national spokesman Ibrahim Hooper mentions Hirsi Ali, it is to dismiss her, saying "her message is one of bigotry, not one of mutual understanding" and calling her 'just one more Muslim-basher on the lecture circuit."

Likewise, CAIR and other American Islamist groups had little or nothing to say on Iranian government repression of peaceful protests of tainted elections in 2009.

The Muslim Public Affairs Council, which has stood up for free speech, hasn't issued any statement on Taseer's killing or what it means for Pakistan's future. The same goes for the Islamic Society of North America.

A looming "descent into chaos" in Pakistan will only make the challenge in the fight against terror greater. A few press releases aren't going to change that. But a united front among Muslim communities around the world that - while they may be offended by things written or said about their faith - killing the offenders is worse. That would be an important statement for tolerance and modernity.

I've been discouraged about the supposed "partnership" we have with Pakistan in fighting the Taliban and al-Qaeda, and I've been alarmed by the recent surveys that show that the majority of Pakistanis are truly very conservative. I was not, however, prepared for the rabid determination that the "blasphemer" be put to death, and I have been truly horrified by this assassination and the seeming condoning of it by Pakistanis. It may well be a tipping point - putting Pakistan on a very dangerous path. The government seems to have either no power or no desire to restore some sense of sanity and order. There is currently a death fatwa for the Minister of Religious Minorities because he too called for a change to the blasphemy laws. There is also a new threat of a suicide attack on the jail where Bibi is being held. What on earth is going to happen in that country if she is not killed, and what will happen if she is? What a horrible situation.