Nihad Awad has a vision for America's future. Awad, a co-founder and executive director of the Council on American-Islamic Relations (CAIR) calls it "the formula."

"A strong CAIR equals a strong community," he said Saturday during CAIR's national fundraising banquet. "A strong community will produce a strong, and confident and successful Muslim ... We are as strong as your support for CAIR."

"So I'm telling you tonight we are going to work in the next years, Inshallah (God willing], to elect at least 30 Muslims in the Congress," he said. "This number is equivalent to our size and our potential as American Muslims. Including at least two [U.S.] senator Muslims."

His math is a little off.

Thirty additional Muslim members of the U.S. House and Senate would constitute 5.6 percent of Congress. But that's better than double the anticipated Muslim American population in Awad's timeframe. According to the most recent Pew research data, there will be about 8 million American Muslims in 2050, or 2.1 percent of the total United States population.

As the community grows, it is likely more Muslim Americans will be elected to Congress as a natural progression, just like members of other immigrant communities in American history. But CAIR's ideal is aimed primarily at elevating one kind of Muslim, conservative Sunnis, when the broader community is much more diverse, including secular, reform-minded leaders.

He also envisioned Muslim federal judges, and a justice on the U.S. Supreme Court. He urged younger Muslims to "study the fields of communications, law, film making. Yes, we need our own Hollywood production studio."

"Islam isn't in America to be equal to any other faith, but to become dominant," Ahmad told a 1998 audience in California.

He served as CAIR's national board chairman until 2009. But Awad made a point of recognizing Ahmad during Saturday night's banquet, which marked CAIR's 25th anniversary. "May Allah bless him for planting the seed for what it will be a historic organization that made history for Muslims and other Americans," Awad said.

The two worked together before starting CAIR. Ahmad spent two years as president of the Islamic Association for Palestine (IAP), which served as a propaganda arm for Hamas in the United States. Awad was the IAP's public relations director.

The IAP also was part of a Muslim Brotherhood-run Hamas support network in America called the "Palestine Committee." CAIR was added to a list of Palestine Committee entities within months of its 1994 creation.

Awad and Ahmad are significant reasons why CAIR was named as an unindicted co-conspirator in the 2008 Hamas-financing prosecution of another Palestine Committee wing, the Holy Land Foundation for Relief and Development, and five former officials. Evidence in that case showed Awad and Ahmad were Palestine Committee members and Ahmad was individually listed as an unindicted co-conspirator.

But according to evidence and testimony by FBI Special Agent Lara Burns, Ahmad was a "leader within the Palestine Committee." Records seized by the FBI and intercepted communications show Ahmad was listed second on the committee's executive board, under a pseudonym "Omar Yehya." 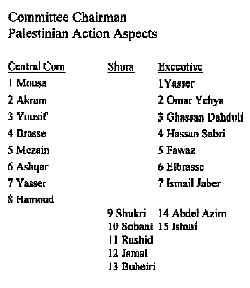 In that role, Ahmad helped determine who would participate in key meetings. He helped resolve a financial dispute between Hamas supporters. And he planned, convened and moderated a pivotal 1993 meeting of the Palestine Committee in which the group discussed ways to "derail" U.S.-led peace efforts between Israelis and Palestinians without coming off as terrorist supporters.

Prosecutors say CAIR was "a participant in an ongoing and ultimately unlawful conspiracy to support a designated terrorist organization, a conspiracy from which CAIR never withdrew."

Saturday's banquet also featured two prominent Islamists who share a hatred for the state of Israel.

U.S. Rep. Ilhan Omar, D-Minn., now is regularly featured at CAIR fundraisers despite a series of anti-Semitic comments that drew bipartisan criticism. Israel "hypnotized the world" to hide its "evil deeds," she wrote in 2012. American support for Israel is "all about the Benjamins, baby," she wrote in February. And as a congresswoman, she feels pressured "to have allegiance/pledge support to a foreign country."

She created a new example just hours before appearing at the CAIR banquet. CNBC promoted a story by writing, "Leon Cooperman says he will support fellow billionaire Mike Bloomberg for President." Omar responded by asking, "I wonder why?"

She and her supporters insist she was referring only to the fact that both men are billionaires, not that both are wealthy Jews. Given her history, however, skepticism is warranted. Even giving her the benefit of the doubt, it doesn't appear Omar has learned to be careful when it comes to her public statements about Jewish people.

That's what Sarsour wants when she advocates a "one-state solution" to the Israeli-Palestinian conflict.

Sarsour, an official surrogate for Democratic presidential candidate Bernie Sanders, called CAIR "one of the most important institutions that we have" and said she is strengthened knowing "that CAIR got my back."

Awad also referred to BDS, touting CAIR's opposition to legislation in more than 25 states. "The pro-Israel lobby launched a counterattack to pass legislation to prohibit and make it illegal to boycott the State of Israel in the United States," he said.

This statement is false. The legislation allows states to cut off business to contractors who join in BDS boycotts. It does not make that activity illegal.

Neither Omar nor Awad mentioned that the U.S. House of Representatives passed a resolution in July condemning the BDS movement by an overwhelming 398-17 vote. BDS, the resolution says, makes peace efforts more difficult to achieve because it gives Palestinians hope that international pressure, not negotiations, is the best path to achieving their goals.

It specifically acknowledged that "the Global BDS Movement does not recognize, and many of its supporters explicitly deny, the right of the Jewish people to national self-determination." That rejection meets the U.S. State Department's definition of anti-Semitism.

There is a crisis facing Muslims in the world, but it did not merit a mention during Saturday's CAIR banquet. An estimated 1.5 million Uighers are detained in Chinese re-education camps. Muslim women reportedly are being forced to accept Chinese men into their homes, and into their beds, if their husbands have been taken away.

There was no call to boycott Chinese products, no suggestion to live without iPads and iPhones. But BDS, the campaign that singles out the world's only Jewish state for a boycott, sanction and divestment drive, was defended despite its inherent anti-Semitism.

War crimes being carried out today by Turkish President Recep Tayyip Erdogan against Kurds in northern Syria also went without mention. Awad has met repeatedly with Erdogan and cast Turkey as a beacon of democracy even as Erdogan cracks down on dissidents and arrests journalists by the score.

Turkish Airlines, which reportedly is 49 percent owned by the state, was among the banquet's sponsors. It "has undoubtedly grown aggressively during Mr Erdogan's watch," the Financial Times reported a year ago, "serving as a soft power tool in his efforts to recast the country's place in the world."

Omar, one of the banquet's featured speakers and another BDS advocate, was the only House Democrat to vote against a resolution seeking economic sanctions on Turkey in response to the assault on Kurds in northern Syria. She wrote an op-ed in the Washington Post criticizing the idea of sanctioning Turkey. "And too often," she wrote, "sanctions regimes are ill considered, incoherent and counterproductive."

The same day as the sanctions bill, Omar voted "present" rather than take a stand on a resolution condemning Turkey for its genocide of Armenians a century ago.