Note: Taqiyya in Islam is a religiously justified deception or dissimulation originally used by the Shi'a community to avoid persecution from Sunni Muslims. More recently, Islamists have used it in pursuit of their often violent agendas. A speaker at Tuesday's event made an erroneous comparison to Jews trying to escape death in the Holocaust. While the story accurately recorded the conversation, we have removed that discussion from this story and apologize for any offense it caused. 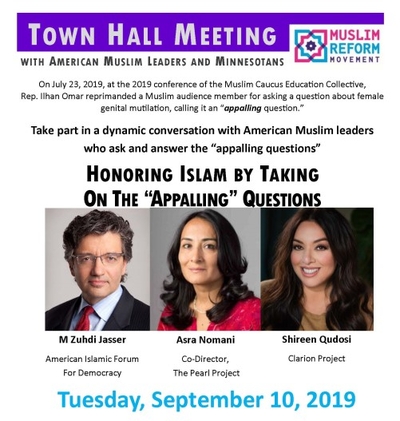 MINNEAPOLIS –Anti-Islamist Muslims came to U.S. Rep. Ilhan Omar's home turf Tuesday night to make it clear that not all Muslims support her shutting down of debate in the Muslim community that was symbolized by her dismissal of a liberal Muslim activist's questions about female genital mutilation (FGM) earlier this summer.

Representatives of the Muslim Reform Movement held a question and answer session at the University of Minnesota called, "Honoring Islam by Taking on the 'Appalling' Questions."

Muslim Americans are not monolithic, but they still need to rethink how their religion applies to the modern world, and embrace the values found in the 1948 United Nations Declaration of Human Rights.

"When I saw this video, I was pretty disappointed ...," said Ayah Abuserrieh, who organized the event for the University of Minnesota College Republicans. "I remember Omar's smug look when she aggressively shot down the opportunity to openly converse around a serious topic."

Omar uses her Muslim identity to raise awareness of Muslims, but she has no interest in dealing with pressing issues that impact the Muslim community, Abuserrieh said.

"Consequently, she does not represent the vast majority of moderate Muslims who value truth, and who love our Christian neighbors and love our Jewish neighbors and want liberty for all," she said.

Omar, a Democratic freshman representative from Minneapolis, has generated controversy for a series of anti-Semitic statements. She attracted more criticism in July after Ani Osman-Zonneveld of Muslims for Progressive Values asked Omar during a July political event to condemn female genital mutilation.

Omar called the question "appalling" because in May she had voted for a resolution that specifically condemned FGM. But her dismissive reaction, when FGM is an especially acute problem in her district, prompted calls for dialogue.

And the threat posed by Omar's ideology and by her fellow Islamists does just that.

"We get the feeling that if you listen to some of these Muslim leaders, that if you somehow disagree with them, that you're somehow anti-Muslim or anti-immigrant," Jasser said.

No one should be above criticism, the panelists said: not Muslim philosophers, teachers, or a congresswoman. They each view the Quran as sacred, but say the issue is interpretation and an effort to stifle questions about it

This critique also includes ancient Islamic juridical interpretations such as those by Imam Shafi, founder of one of Sunni Islam's main juridical schools, called The Reliance of the Traveller, they said. "Reliance of the Traveler" includes sections about waging offensive jihad against non-Muslims, subjugation of non-Muslims, treating women as inferiors and so forth. ISIS used it to justify its slaughter and enslavement of the Yazidis.

Sunni Islam lacks a hierarchy empowered to decide matters of doctrine, they said. Consequently, Muslim laypeople have an obligation to start reinterpreting difficult Quranic verses that run contrary to modern values of human rights by means of historical contextualization. The speakers compared the concept to modern Jews and Christians who no longer interpret violent biblical verses literally.

In that light, "appalling questions" do not exist, Qudosi said. Muslims need to question their religion's views on women, human rights and the privileges of non-Muslims. That can be a difficult process within many Muslim families.

Her parents, immigrants from Pakistan and Afghanistan, all but excommunicated her for asking questions about her religion, leaving her homeless for a time. The family healed itself, she said, but these questions need to be honored and answered.

Nomani emphasized the need to restore critical thinking and reasoning to Islam called ijtihad, which Muslim scholars used to determine the contextual meaning of Islamic texts.

Her commitment to ijtihad began shortly after her friend and Wall Street Journal colleague, Daniel Pearl, was kidnapped during a 2002 reporting assignment in Karachi and beheaded by jihadists.

This caused her to think about what in her religion would cause people to do such a horrific thing. How can Islam be reformed to emphasize its passages about grace and mercy instead of the Quran's violent verses? She pointed to the Mutazalites, a faction of Muslim scholars who lived from the 8th to the 10th centuries, who emphasized the role of reason in understanding Islam.

"It was that Islam of grace that gave my mother and my father that critical element of rational thinking," Nomani said, recalling what gave her the frame of reference for her work. "It is a movement that is required to transform the world."

Today, the loudest narrative is dominated by voices who apply Islamic teaching to politics – an ideology known as Islamism.

It is "a relatively recent construct that takes the idea of a totalitarian state and demands puritanical ideological rigidity," Qudosi said. "And in doing so, it violates a cornerstone in Islam: There shall be no compulsion in religion. Islamism has no philosophy other than being a reaction to colonialism. In recent years, Islamism has had to barter and borrow from socialist propaganda in order to gain relevancy.

"It cannot stand on its own, and it will not withstand the torch of inquiry reform brings."

Jasser called American Muslims who aren't attached to mosques the "silent majority." He called on them to organize and let the world know that terrorist apologists from the Council on American Islamic Relations (CAIR) do not speak for the majority of America's estimated 3.5 million Muslims. The alphabet soup of Muslim organizations that garner the bulk of the media's attention have scant support in the broader U.S. Muslim community.

But some audience members seemed hostile and mistrustful of the Muslim Reform Movement, accusing it of engaging in taqiyya, which they claimed allows Muslims to lie to non-Muslims about what they believe.

Muslim reformers acknowledge problems exist in Islam, Jasser said, but those issues boil down to how the religion's texts are interpreted. Not all Muslims think alike.

"One of the blessings here is that many people are waking up to the reality of what the establishment of our community believes, and what it believes is not becoming mainstreamed into American politics," Jasser said. "And all I can tell you is that we don't all agree with [Omar]; we wouldn't even elect her to the board of a mosque let alone be a congresswoman.

"And yet she got elected based on identity politics and victimization issues."

Qudosi and Jasser challenged skeptics to find inconsistencies in their statements. Larry Frost, a member of the audience who identified himself as a former military intelligence officer, told the Investigative Project on Terrorism (IPT) that he had done what they suggested and looked at their statements.

"Dr. Jasser is doing exactly what he says he's doing. I can't find any inconsistencies in any of his work for 15 years," Frost said.

The University of Minnesota College Republicans hosted the event. The College Democrats declined an invitation to participate, saying the Muslim Reform Movement's values do not align with theirs.

Change will be a slow process that may not be achieved in this lifetime, but that fight needs to be fought, Qudosi said.