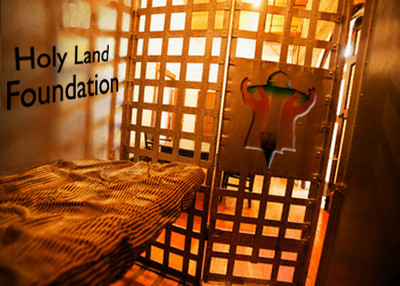 DALLAS - A federal judge imposed what could amount to life sentences on three former leaders of the Holy Land Foundation for Relief and Development (HLF) on Wednesday for illegally routing more than $12 million to Hamas.

"The purpose of creating the Holy Land Foundation was as a fundraising arm for Hamas," said U.S. District Judge Jorge Solis.

He sentenced former HLF Chief Executive Officer Shukri Abu Baker and co-founder Ghassan Elashi to 65 years in prison. Longtime HLF chairman Mohamed El-Mezain, who was convicted only on one count of conspiring to provide material support to terrorists, received the maximum 15-year sentence.

While appeals are being prepared, the sentencing hearings end the largest terror financing case in the United States, one which closed the largest Muslim-American charity in 2001. Its significance, however, resonates far beyond the Dallas courtroom and the five men convicted by a jury last November.

The evidence showed that HLF was part of a broad Muslim Brotherhood conspiracy in the United States called the Palestine Committee, which was to serve Hamas with "media, money and men." Those exhibits show the depth of Muslim Brotherhood activity here, which at its height included a think tank in Virginia, a propaganda arm in Texas and Chicago, and a political operation that continues to exert influence today.

It also led to the discovery of a Brotherhood memorandum from 1991 that describes the group's goal in America. It called for a "civilization-jihadist process" and a "grand jihad" that aimed at "eliminating and destroying the Western civilization from within … so that it is eliminated and God's religion is made victorious over all other religions."

The Council on American-Islamic Relations (CAIR) is a Palestine Committee legacy. Last year, the FBI decided to cut off communication with CAIR due to concerns about the evidence showing the organization's Hamas roots.

"Nevertheless, until we can resolve whether there continues to be a connection between CAIR or its executives and HAMAS, the FBI does not view CAIR as an appropriate liaison partner," wrote Richard C. Powers, an assistant director in the FBI's office of Congressional Affairs, last month.

The defendants, who have been in custody since last November's verdicts, wore orange jail jumpsuits. Neither they, nor their attorneys yielded any ground on the core issue in the case – that their efforts to raise and distribute money for Palestinian charities was done with the goal of helping Hamas politically and supporting the relatives of its fighters who were arrested or died in terrorist attacks.

"All he did was provide humanitarian relief," defense attorney Linda Moreno said of Elashi.

"I believe I am innocent and have not committed any crime," El-Mezain said during an emotional 23-minute statement. He called his prosecution "unjust, selective and political."

Solis rejected the defense claims. "The evidence supports the jury's verdict in this case that you did support Hamas in violation of the law," he said.

Intent on sentencing all five defendants in one day, Solis cut off Baker's statement after 20 minutes. Defense attorney Nancy Hollander objected, saying Baker "has a right to make his statement." Solis offered an additional five minutes, but said "I don't want to go all morning, counselor."

Baker did not finish his statement. Its focus was autobiographical, emphasizing the hardships he has endured caring for a chronically ill daughter. It was "a father's melting heart" that prompted him to devote his life to charity, Baker said.

The defendants offered the court a misleading account of their activities, prosecutors said, pointing to exhibits that showed rallies featuring songs and skits praising Hamas, that featured Hamas members and the role Baker and Elashi played in a 1993 meeting in Philadelphia aimed at trying to "derail" U.S.-led peace efforts.

In one portion of the conversation, Baker told the others that "war is deception," and at other times, the group discussed how to persuade Americans about their cause without revealing their support of a terrorist organization.

The judge agreed, rejecting most defense objections to the pre-sentence report and accepting enhancements to the sentencing guidelines because the crimes involved supporting terrorism. The defense arguments, that the group merely provided charity to those in desperate need, "don't tell the whole story," Solis said.

"A lot of people help people and don't get brought into court. You are here because you were supporting Hamas" and continued to do so after it became illegal.

HLF supporters do not accept the verdict, calling the defendants "our falsely convicted brothers" in an e-mail meant to drum up attendance at the hearing. Across the street from the courthouse, supporters held the same sign they displayed throughout the case: "Feeding children is not a crime."

In addition to the jury verdicts, two other men entered guilty pleas on related charges. Earlier this month, Arizona resident Akram Abdallah pled guilty to lying to FBI agents about his HLF fundraising. He is scheduled to be sentenced in August.

Mohamed Shorbagi, a Georgia imam, pled guilty to conspiring to provide material support to Hamas. As part of his plea, Shorbagi agreed to cooperate with the government and testified as a prosecution witness.

He told jurors that he knew money he raised for HLF would support Hamas.

What about other transferts

What about jews found transfert the zionist state ?

The American justice system at work

This is actually a triumph of our country. Our system is open, people may do what they please for the most part. These people wanted to exploit that openness. It worked for a little while, but when caught they were punished and our system still stands.

We don't need to change our system, it already works.

If saving the spirit of America --i.e. The land of [constructive and progressive] dreams-- require reforming Democracy --that is being widely and dangerously abused by new American-Hamas-Hezbollah-AlQaead-and-Co-citizens-- please go ahead. Please reinforce the values of Democracy at the American good people. Please kick out all those who have difficulties in to understanding those values. Get them back to where they truly belong i.e. to their native-hatred-nations i.e. Majority of Arab-hatred-countries.

I'm not an American citizen. Although what is bad for your nation i.e. keep or to preserve its spirit, is also bad for me i.e. a Middle easterner who is starving for Peace[of mind] living!

I commend Judge Solis for his sentencing of the people involved in HLF. What an outrage that these people come here and take millions from unsuspecting generous people and funnel it to an organization that is contrary to what America stands for!! Keep up the good work of prosecuting these terrorists and informing the general public!! God Bless you.